Drug-Resistant Gonorrhea and Other Emerging Issues in STIs

APR 18, 2018 | NICOLA M. PARRY, BVSC, MRCVS, MSC, DACVP, ELS
Previous downward trends in the rates of sexually transmitted infections (STIs) have reversed in recent years, and their incidence is on the rise in both men and women in the United States.1 In particular, the 3 most common reportable STIs—gonorrhea, chlamydia, and syphilis—represent a growing health threat, according to the US Centers for Disease Control and Prevention (CDC).1

CDC surveillance data showed that more than 2 million cases of gonorrhea, chlamydia, and syphilis were diagnosed in 2016, the highest number of these STIs ever reported. Most of these new cases were due to chlamydia infection.1 Although all three of these STIs remain treatable with antibiotics in the majority of cases (Table 1), without timely diagnosis, they may lead to deleterious consequences such as infertility, stillbirth, and neonatal mortality.2 And, adding to the public health threat associated with these infections, antibiotic resistance is making gonorrhea increasingly harder to treat.3

Gonorrhea is the second most commonly reported notifiable disease in the United States.4 Although its rates dropped to an all-time national low in 2009, 470,000 new cases were reported to CDC in 2016—an increase of more than 18% from 2015.1,5 The greatest increase in cases was seen among men, particularly men who have sex with men (MSM).5

Although gonorrhea is treatable with antibiotics, therapy has been complicated by the ability of the bacterium to develop resistance to most of the antibiotics recommended to treat it: first the sulfonamides, then tetracycline and penicillin, and, most recently, the fluoroquinolones.6 Indeed, a 2013 CDC report listed antibiotic-resistant gonorrhea among the 3 most urgent threats of its kind in the United States.7,8

“Our first-line drugs, combination cephalosporins and azithromycin, are still effective for gonorrhea (Table 1),” said Christine Johnston, MD, MPH, FIDSA, an associate professor in the Division of Allergy & Infectious Diseases, University of Washington, Seattle, and medical director of the University of Washington STD Prevention Training Center, part of the CDC-funded National Network of STD Clinical Prevention Training Centers. “But we are seeing emergence of case reports of resistance to these drugs, which is of huge concern,” she emphasized.

“In my clinical practice, I have not been seeing resistance to the combination therapy recommended by CDC for gonorrhea9—yet. But, the main concern is that we are marching through classes of antibiotics for treatment. Several drugs have been available, but gonorrhea has rapidly acquired resistance with use of these drugs.”

Surveillance is critical for identifying and monitoring gonococcal resistance. According to Dr. Johnston, surveillance for antibiotic resistance in N. gonorrhoeae in the United States is conducted through the Gonococcal Isolate Surveillance Project (GISP).10-12 In GISP, participating regional laboratories collect N. gonorrhoeae specimens each month from STI clinics throughout the country. “This has provided a good picture of resistance to the drugs and how it’s developing, and has really helped to inform treatment strategies for gonorrhea,” said Dr. Johnston.

“A few new drugs are in the pipeline for gonorrhea,” said Dr. Johnston. These include solithromycin,13 zoliflodacin,14 and gepotidacin.15 “And, we need to stay ahead of the resistance by developing new antibiotics.”

Infection with Chlamydia trachomatis is the most frequently reported STI in the United States.5 Almost 1.6 million new cases were reported in 2016, and most of these diagnoses continue to be in adolescent and young adult women.5

“We are seeing historically high rates of infection with chlamydia,” said Dr. Johnston, “especially in young women, and in MSM.” However, she explained that the rise in rate of chlamydia infections is not associated with antimicrobial resistance. “It is likely to be associated with increased transmission of infection, as well as with improved rates of screening,” she said.

Syphilis, caused by the bacterium Treponema pallidum, can also lead to significant complications if left untreated.19,20 In addition to potentially causing reproductive problems and neonatal mortality, untreated syphilis can persist for many years, and can progress to become a systemic infection, affecting many organ systems, including the brain.19,20

Although rates of syphilis reached an all-time low in 2000, they have steadily increased since then, with almost 28,000 cases of primary and secondary syphilis—the most infectious stages of the disease—reported in 2016 in the United States.5 This represented a 17% rise in the number of cases from 2015, with increases seen in both men and women. However, most cases of syphilis in the United States continue to occur among MSM.5

“We are seeing historically high rates of syphilis infection in the United States,” stressed Dr. Johnston. Although this is concerning, she noted that, much like the situation with chlamydia infections, this increase is also not associated with antimicrobial resistance. “Syphilis is still very susceptible to first-line penicillins (Table 1).” However, she stressed the need for improved control programs to reduce the incidence of this infection.

Although common, some other STIs, including those due to herpes simplex virus (HSV) or human papilloma virus (HPV), are not required to be reported and may not cause noticeable symptoms.21,22 This makes their incidence difficult to determine.

Genital herpes results from infection with predominantly HSV2 but is increasingly due to HSV1.23 Infections with HSV are among the most common human diseases,23 and an estimated 1 in 8 individuals in the United States aged 14 to 49 years has genital herpes.24 However, most HSV infections are subclinical,22 and most infected individuals have not received a diagnosis.

Genital herpes is treated with antiviral agents within the nucleoside analog class (Table 1).23 However, long-term treatment with acyclovir and its derivatives may lead to drug resistance, the mechanism of action of which is related to viral thymidine kinase or DNA polymerase mutations.23 Nevertheless, Dr. Johnston noted that resistance to these drugs is uncommon in immunocompetent hosts, and is almost exclusively seen in immunocompromised individuals, such as AIDS patients with low CD4 counts and transplant recipients. Reported prevalence rates for HSV resistance to acyclovir typically range from 3.5% to 10%.23

Several new strategies are emerging for treating drug-resistant HSV infections. These include development of new drug targets (such as the DNA helicase/primase complex), new antiviral strategies (such as lethal mutagenesis), and new drugs.23 In a recent study, researchers found that a novel small drug molecule, a TANK-binding kinase 1 inhibitor known as BX795, suppressed HSV1 infection in cell cultures as well as in mice.26 The researchers say it may also hold promise in treating HSV2 infections.26

HPV is the most common STI, affecting an estimated 79 million Americans, with about 14 million new infections arising each year.27,28 Although some HPV types can cause genital warts and are considered low risk for causing cancer, others are considered high risk for causing cancer, including of the cervix and vagina in women, penis in men, and anus and oropharynx in men and women.29

“We don’t usually treat HPV with antiviral medications,” said Dr. Johnston, “because the virus is often cleared by the immune response. In addition, effective vaccines against the most common strains of the virus are available.” Indeed, HPV vaccination has been shown to be effective in reducing the prevalence of HPV infection among young men and women in the United States.30,31 One US study showed substantial reductions in national vaccine-type HPV prevalence among young women aged 14 to 19 years (64%) and 20 to 24 years (34%) within 6 years of the vaccine being introduced.30 And, a more recent study also confirmed a reduction in vaccine-type oral HPV prevalence among young adults in the United States. In particular, the prevalence of oral HPV types 16, 18, 6, and 11 infections was significantly decreased in vaccinated men compared with unvaccinated men (0.0% vs 2.13%; Padj = .007). However, the population-level effect of HPV vaccination on the burden of these oral infections was only modest and was especially low in men, the authors say, because of low vaccine uptake.31

Despite improvements in public awareness, treatment, and prevention, the incidence of many common STIs, thus, continues to rise, and these infections persist as a public health problem and a major cause for morbidity and mortality worldwide.32

In the United States, many cases of gonorrhea, chlamydia, and syphilis continue to go undiagnosed and unreported, and data on other STIs—such as HSV and HPV, are not routinely reported to CDC. Consequently, national surveillance data fails to highlight the true burden of STIs in this country. A collaborative effort is required to address this problem.33 Heightened efforts are critical to combating drug resistance, especially for gonorrhea.34 Screening and prevention are also key, and health care providers should incorporate STI screening and prompt treatment into standard practice, especially for pregnant women and MSM. Providers should also educate patients about STIs, how to prevent them, and the need for screening.35 In addition, state and local health departments must receive additional funding to improve existing technical infrastructure, to increase efficiency and quality of laboratory diagnostic capabilities, in order to facilitate prompt detection and treatment of STIs.35 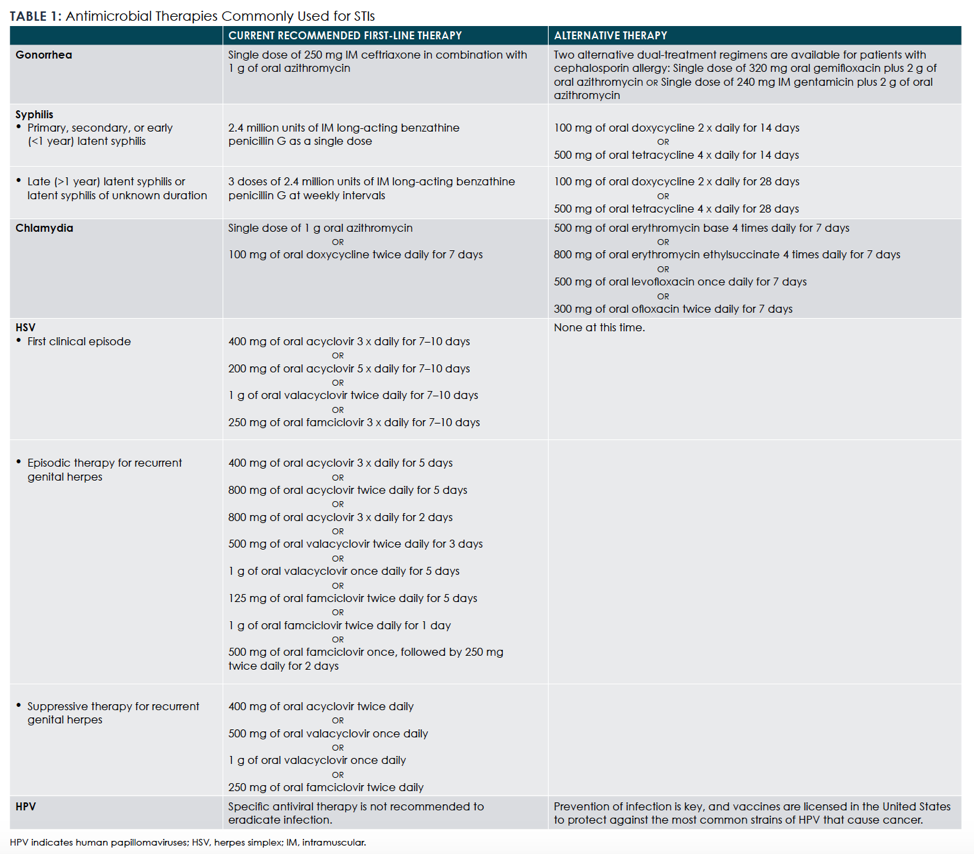 Dr. Parry is a veterinarian and is board-certified in veterinary pathology. After 13 years in academia, she now works as a private pathology consultant, and is an active member of the American Veterinary Medical Association and the American College of Veterinary Pathologists. References: