Peter L. Salgo, MD: If you want to elucidate 3 bullet points, what are the goals of an effective stewardship program? What would those goals be?

Debra Goff, PharmD, FCCP: Assuring responsible use of antibiotics. To me, that’s the biggest goal of a stewardship program.

Jason Pogue, PharmD, BCPS-AQID: I would say that for me, and again, this all goes under the optimal use of antibiotics. But I think the primary thing that we do, the most important thing we do is that patients who come into our hospital with an infection, we get them on the 5 Ds as she talked about, or I guess it would be the 4 Ds because they’ve already been diagnosed from that standpoint. I think that’s the most important thing because we improve patient care. We improve outcomes, we decrease bad. But the flip of that is that we have to stop the unintended consequences as well, but it goes hand in hand with doing that. If you do that, you also stop the bad or at least decrease the bad, which is toxicity, resistance, C. diff, all those things.

Peter L. Salgo, MD: I got it. So, it would seem to me in my untutored way, that one of the things you want to do is be sure that people get the right antibiotic for the right infection, right?

Peter L. Salgo, MD: And you don’t want them to get, not necessarily the wrong antibiotic, but perhaps you want to get a more targeted antibiotic, so that you don’t get resistance. Is that fair?

Peter L. Salgo, MD: Alright. You want to minimize the development of resistance across the board. All this sounds like everything I needed to know about infectious disease I learned in kindergarten. So, why the pushback?

Debra Goff, PharmD, FCCP: So, I think a lot of the pushback is when you’re prescribing in the moment, and I’ve actually had surgeons tell me this.

Peter L. Salgo, MD: Why is it always surgeons?

Debra Goff, PharmD, FCCP: Because they’re very cavalier with their use of antibiotics.

Peter L. Salgo, MD: I’m trying to save you from yourself, but there you go.

Debra Goff, PharmD, FCCP: I love working with them because they’re very evidence-based, but you go to surgery, and infection post-op in most surgeon’s mind is a reflection of “I messed up, like I did something wrong in the surgery.” It’s a direct hit on them and partially their ego. And so, it’s you either have an infection or you don’t. The prescribing of antibiotics is often just in case they might have an infection because they’re perceived as benign drugs with minimal risk. And that’s what they learned, and they learned that decades ago. Now the risk is much greater than that perceived benefit, and that’s what we’re trying to change. And so, stewardship has to convey that. So, when you try to talk to a surgeon or an oncologist, the discussion is not so much convincing them about spectrum in that every day they’re on an antibiotic and your risk of C. diff occurring is this. Actually, you have them on 2 antibiotics, 3 antibiotics; the more antibiotics per day, that risk continues to go up and the development of a multidrug resistant organism. So, now tell me again what was the benefit because I’ve described it to you, and we’re also negatively affecting your microbiome, and that is a real topic that is resonating with surgeons right now. There’s a lot of research going on with the negative impact of antibiotics on the microbiome. So, when you talk in those terms, it kind of flips the discussion and it makes them think a little differently and it works.

Sandy J. Estrada Lopez, PharmD, BCPS (AQID): I think we’ve done a poor job of education on the negative consequence. We’ve done a lot with education on “Use this for us, this is the spectrum, this not this,” but not as much on the nothing at all because they don’t really have an infection or really think about the total risk-benefit. And we think about risk-benefit with everything in medicine, but it really pertains a lot to antimicrobial utilization. And I think now that we’re stepping it up with providers, the next step is going to be that outpatient thing. We all think about how much control we have in the hospital, which we sometimes feel is not enough or sometimes is too much, depending on which side of the coin we’re on. But think about the outpatient scenario where really there’s no stewardship, and it’s driven by patients. So, maybe some physician is prescribing antibiotics just in case, but many patients want antibiotics just in case. Many moms want antibiotics just in case for their child.

Sandy J. Estrada Lopez, PharmD, BCPS (AQID): Exactly, and you don’t know if there’s an unintended consequence of a Z-Pak. You just think, “It might make me better and I feel so bad, I’m willing to take the chance even if it’s 40%.”

Peter L. Salgo, MD: Is it easier to use stewardship on new drugs than to reach out and control drugs that are out there already?

Andrew Shorr, MD: No, but it’s easier to get support from institutions to do that.

Jason Pogue, PharmD, BCPS-AQID: And I would also say that it’s a smaller volume. If I try to give everybody on the floor that’s on ceftriaxone, that’s a lot. But the 3 people who might be relevant to a new drug is a lot easier.

Peter L. Salgo, MD: Also, it isn’t habit to say, “I’ve always used this drug, this drug, this.” If they’re not in the habit of using the new one, the gorillamycin…

Peter L. Salgo, MD: They haven’t used it yet so you’re going to control… 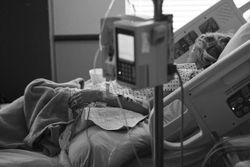