Contagion®: Thanks for joining us for another Contagion® coronavirus video. Today we're joined by Dr. Michael Gusmano from the Rutgers School of Public Health. Thank you so much for joining us today.

Gusmano: Oh, it's my pleasure. Thanks for inviting me.

Contagion®: Great. So why don't we just get started? The COVID-19 situation is developing very rapidly. Some clinical trials are being approved and begin enrolling what seems like breakneck speed. So what are some important standards that we need to make sure are being maintained during this time?

Gusmano: Well, it's a good question. I think it's incredibly important that we make sure that the trials are well designed. That they can use innovative designs, including complex designs, but that they ought to be using well designed trials with controls. One of my big concerns is that we have rushed, in some cases, into the use of treatment under the Federal Emergency Use Authorization Act without controls. This can be a big problem, because then obviously it far more difficult to evaluate whether any effects are due to the intervention or not, and whether or not there are significant harms associated with that intervention. I think sticking with the usual standards of designing trials well is important. I also think it's important, because one of the things that that we have tried to do in the rush to find vaccines and treatments for COVID-19 is in some instances we skip over animal testing or to do parallel animal testing, and I think we should have a public registry for any of the results from the parallel animal testing that's going on. One of the concerns is that if you begin to see safety problems in the parallel animal testing the phase one human trials should be stopped immediately. It's important for the public to have access to that. Similarly, we are enrolling some healthy people in trials for vaccines, and it's really important from an informed consent point of view to make sure that those people who are being enrolled realize that in some instances, there haven't been animal trials that are going on in parallel, so that they better understand the risks of what they're facing.

Contagion®: So I guess my next question is, how can federal health officials and agencies work to maintain standards and make sure that they're being upheld in COVID-19 research?

Gusmano: Right. Well, I think it's important for the FDA to continue to play its monitoring role, to make sure that it's getting real time information and working in partnership, as it always does with the pharmaceutical industry, university researchers and again to have the political willingness to step in and stop things when there is evidence that the harms are outweighing the benefits.

Contagion®: Now, is it correct to assume that maintaining these ethical standards will require collaboration between researchers and pharmaceutical companies and federal agencies?

Gusmano: Well, I think this is always the case. It's long been the case in our entire regime of developing testing, monitoring, regulating new drugs involve public-private partnerships between the FDA or the European Medicines Agency and pharmaceutical firms, along with the university level researchers. So this has always been a public-private partnership, and that coordination is more important than ever.

Contagion®: COVID-19 mitigation is counting a lot on isolation and social distancing to reduce the burden of COVID on health care systems. So how can protocols for clinical trials not necessarily for COVID, but other disease states be modified to account for this?

Gusmano: Well, again, another good question. I think if you go onto the website, a lot of the IRB is around the country of major universities, including Rutgers, you find information about how they are working with researchers to modify protocols. Some human subjects research, it's simply been stopped because if it's not essential, it shouldn't continue to go on to put people at risk. Some of my research actually is currently on hold because it involved focus groups, for example, that were not related to COVID and just makes absolutely no sense to continue with that when people are at risk. Obviously, for the things we're talking about in terms of clinical trials for vaccines or treatments directly related to COVID, making accommodations but even for other clinical trials, they can make some accommodations. For example, it may be possible in some trials, for the experimental drugs to be delivered to the home, and for people to take those drugs at home and provide appropriate reports back to the researchers and collect data that way. When people have to come into the clinic, obviously, they engage in social distancing when possible, the use of protective equipment, hand washing, and the like. And so in every instance, I think what you're seeing is, IRBs appropriately re-reviewing protocols to make sure that they've been modified to minimize the possible harms that people will face as we're trying to continue to develop new treatments.

Contagion®: Now, if you go on clinicaltrials.gov, you can see that there are thousands of randomized controlled trials already for COVID019 countermeasures. So is there a way to prevent the duplication of effort?

Gusmano: Well, that's what we're trying, and we'll see if it's successful. If you go back last month, the Gates Foundation actually began this before governments did. And so, they started trying to put together a coordinated effort into the agreements of not-for-profits who are helping to fund some of this work, pharmaceutical companies, university researchers. In fact, just last week, Francis Collins, the director of the NIH, announced a new collaborative effort in a public-private partnership to try to coordinate this. So, you have on board the Food and Drug Administration, the EMA, most of the major pharmaceutical companies, university researchers and others who are doing a number of different important things to try to eliminate the unnecessary duplication. Some duplication of effort can be helpful, and you know, with a competition to try to see who can develop the drugs. But what you don't want to be doing is to conduct multiple trials that are not informing each other. Good evidence starts to come in that a promising drug isn't as promising as we hoped. You want to redirect efforts away from that and toward things that seem to be working. The other important thing or one of the other important things that that effort is going to try to do is, to the extent possible, standardize protocols, standardize the use of various outcomes, like different biomarkers that are being used by different trials. That can be valuable because then you can actually compare results from multiple trials that are going on to see if they're consistent with each other. If they're all using different protocols and different markers, it might be more difficult to coordinate that effort. So, whether this will work is something we're going to find out. But I think it's a very good step first by the Gates Foundation and now by the NIH to try to make that work.

Contagion®: Absolutely. Do you have any final thoughts or comments?

Gusmano: Well, I mean, my biggest concern all along, is that we have to not rush the science, there is a completely understandable desire to find a vaccine and/or a cure as soon as humanly possible to get out of suffering and death that is going on. But, it can be incredibly dangerous to try to rush things into the clinic without appropriate evidence. We've seen some of that already with hydroxychloroquine and some of these other things that have come to the fore and then rushed into the clinic. Under the best circumstances, all drugs have some side effects and can produce some harms. There are very few benign interventions in the clinic.

The real question is do the benefits outweigh those harms? And does it make sense we continue to move forward? Frankly, the only way to do that is with good science. I'm afraid that the kinds of clinical trials that we're talking about, particularly the development of vaccines, just take a lot more time than any of us would like to believe. But, I think that's one of the kind of grown up questions that we have to deal with and part of the hard truth people are going to have to accept is that when you try to rush this, you can do some significant damage to people's health. The idea that they have nothing to lose is ridiculous because even when people are facing a life limiting illness, you can induce suffering. You can hasten death, unnecessarily if you are giving them drugs for which we know there are harms and for which we have no evidence that there are benefits. So it's important not to rush this stuff.

Contagion®: Absolutely. Thank you so much for joining us this morning. Dr. Gusmano, we really appreciate hearing your perspective.

Gusmano: Great. Thank you. It was nice speaking with you. 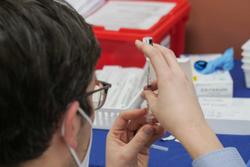