If the FDA authorizes molnupiravir based on the Antimicrobial Drugs Advisory Committee's recomendation, it would become the first oral COVID-19 treatment.

Indicated for older adults and the immunocompromised, molnupiravir would be the first oral COVID-19 treatment option if approved.

Merck previously stated that molnupiravir reduced hospitalization and mortality rates by 50%, citing findings from its phase 3 trial. These exemplary findings fulfilled the study’s primary endpoint, and Merck was directed to cease testing.

However, on Friday, the final study data showed molnupiravir reduced relative risk of COVID-19-related hospitalization and death by 30% versus placebo. Approximately 6.8% of the participants treated with molnupiravir were hospitalized or died, as compared to 9.7% of the placebo recipients.

This significant decrease in reported efficacy raised questions about the benefits of treatment with molnupiravir.

There were 9 deaths reported in the placebo group, and 1 death in the molnupiravir group. Molnupiravir’s adverse event profile remained the same as reported with the original data.

Molnupiravir is an orally administered form of a ribonucleoside analog that inhibits the replication of SARS-CoV-2, the virus that causes COVID-19. Merck and Ridgeback Biotherapeutics are developing molnupiravir together, after licensing the drug from Emory University.

Molnupiravir was already approved for use in the UK and the US had preordered over 3 million doses of the treatment. The updated trial results were shared with the US Food and Drug Administration (FDA), who will review the findings tomorrow.

Merck is seeking FDA approval of molnupiravir for individuals with mild to moderate COVID-19 who are at high risk for severe disease outcome, such as the immunocompromised. If authorized, molnupiravir would not be available to children or pregnant women. Molnupiravir did not appear to help patients who were already hospitalized, or patients who were seropositive from a previous COVID-19 infection.

In a statement, Merck said, “Merck and Ridgeback Biotherapeutics have conducted a rigorous development program for molnupiravir, and believe that molnupiravir has the potential to address a significant unmet medical need for an oral medicine for adults with COVID-19 who are at risk for progressing to severe COVID-19 and/or hospitalization. We look forward to working with the FDA and other agencies as they review our applications.” 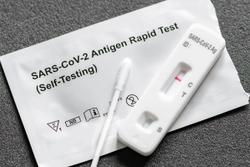