The tech mogul shares that world leaders need to prepare for the next pandemic&mdash;whatever the root cause&mdash;including plans for mobilizing military, health, and other resources while coordinating efforts with private industry.

He can also work a room.

Which is why we were looking forward to his talk at “Epidemics Going Viral: Innovation vs. Nature,” presented by The New England Journal of Medicine and the Massachusetts Medical Society on April 27. Gates, of course, is a tech billionaire, and he has devoted much of his life to supporting (financially and otherwise) public health-related initiatives. He was invited to deliver the Shattuck Lecture, which has been presented annually, in Boston, since 1890. His topic: “Innovation for Pandemics.”

“I’m usually the super-optimist, pointing out that life keeps getting better for most of the world and encouraging us to accelerate those improvements,” he told the audience. “There’s one area, though, where the world isn’t making much progress… and that’s pandemic preparedness. It should concern us all because history tells us there will be another deadly global pandemic.”

Indeed, as Gates noted, there are at least 3 factors that “increase the likelihood of a pandemic in our lifetime”—namely, the continuous rise of new pathogens (think: SARS and MERS), the emerging risk of a bioterrorism attack (eg, weaponized smallpox), and the rapid spread of disease fostered by air travel. He sounded the alarm when he added that recent disease outbreaks (eg, H1N1 influenza, Zika, and Ebola) have shown that the world’s health care infrastructure is unable to generate an adequate response, particularly in the developing world. Even in the resource-rich United States, he said, the response to recent outbreaks has been “grossly insufficient.”

“Swine flu showed our inability to track the spread of disease and develop new tools for public health emergencies,” he said. “And [with] Ebola, the world was much too slow to respond.”

However, Gates didn’t just use the platform offered by the Shattuck Lecture to warn the world’s public health community. As is his wont, he also name-checked a number of important research initiatives that may just lead the way toward improving pandemic response globally, while at the same time announcing new projects that have received funding through his Bill and Melinda Gates Foundation.

In keeping with the history of the Shattuck Lecture—the first of which discussed the “Russian Flu” pandemic in the late 19th century—Gates used the potential threat of pandemic influenza as an example. He noted that epidemiologic models suggest that, even with the vaccines currently available, an influenza pandemic could result in as many as 33 million deaths globally within 6 months of the initial outbreak.

The Holy Grail in preventing such a pandemic remains a universal vaccine. To that end, Gates noted that his foundation has partnered with GlaxoSmithKline, the National Institutes of Health, and the Icahn School of Medicine to develop a novel vaccine, which has already undergone phase 1 clinical trials. In addition, the Gates Foundation has partnered with the Page Family Foundation to create a $20 million grant “challenge” that will be awarded to researchers engaged in the development of a universal flu vaccine.

Gates also lauded ongoing efforts to improve influenza diagnosis and treatment. He recognized the work of researchers at the Broad Institute of MIT and Harvard and the University of California, Berkeley in the development of a diagnostic approach using CRISPR, the DNA sequences found in bacteria. Early results using the approach, called SHERLOCK, which were published in the journal Science, indicate that it can successfully detect the presence of pathogens in blood, saliva, and/or urine.

Meanwhile, Gates remarked that there have been significant advancements made in antiviral drugs and antibody therapies used in the treatment of influenza as well. Regulators in Japan recently approved the drug Xofluza, which promises to cure the flu after only a single dose.

Finally, the tech icon recognized ongoing work in the area of computer modeling technologies designed to “predict pandemics and how they will spread,” citing in particular the Institute for Health Metrics and Evaluation at the University of Washington and the Institute of Disease Modeling, the latter of which has focused on malaria, HIV, tuberculosis, and polio, working to tailor efforts to combat these diseases to “local conditions.”

Having said all that, Gates concluded by acknowledging that the next pandemic threat will more than likely develop from a “previously unknown pathogen.” Here, he credited the ongoing work of groups such as the Coalition for Epidemic Preparedness Innovations (CEPI), which, among other projects, is currently partnering with Merck to develop a “Just-In-Case” vaccine (rVSV-ZEBOV) for Ebola in hopes of short-circuiting the next outbreak.

Above all, he concluded, world leaders need to prepare for the next pandemic—whatever the root cause. This includes plans for mobilizing military, health, and other resources while coordinating efforts with private industry (eg, pharma).

“The world needs to prepare for a pandemic in the same serious way it prepares for war,” he said. “What the world needs, and what our safety—indeed, if not our survival—demands, is a coordinated global approach. We need better tools, an early detection system, and a global response system.”

And, in the end, the United States “can and should play a leadership role” in these efforts. 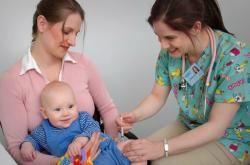 COVID-19 Deaths, Excess All-Cause Mortality in US and Other Nations