How Elective is Elective Surgery During COVID-19?

Can I ask what specific measures Jefferson health has taken to rise to the challenge of COVID-19.

From the very beginning of the outbreak, we spared no expense ensuring the safety of our staff and our patients. One of the things that really helped us is we just assumed, and I'm talking about January, this was going to be a nightmare financially. And so instead of trying to do some elective cases or hold off on giving people masks, we we went to an all-mask environment very early and we also went to an N-95 mask environment in any areas of COVID positive or COVID suspicious patients incredibly early. We developed one of the earliest mobile testing sites, testing at the parking lot, sidewalks, and all the rest.

We very early on, despite the financial consequences, canceled non-essential surgery and direct patient visits in order to preserve PPE [protective personal equipment] and not increase the COVID risk. At the same time, we made some really compassionate decisions, including allowing 1 person to accompany a patient in labor and delivery. And allowed loved ones to see a critically ill patient, which in other places created a lot of problems.

Our innovation pillar delivered a system for enabling Zoom clinical counsels and family meetings with patients in our hospitals. We had invested heavily previously in "healthcare with no address." We went to over 3000 telehealth visits a day. We had artificial intelligence chatbots on our appointments page that assisted with triaging. We did all this within 2 to 3 weeks.

This created the opportunity to be able to keep our employees safe. We quadrupled our occupational therapy and behavioral health opportunities. One of the things that's under talked about is the PTSD a lot of these folks on the front line will see. We were just on Good Morning America because we had a group of nurses that was doing a dance. That kind of thing, trying to keep the morale up. Imagine this, if you have 2 or 3 kids and you're on the front line you can't go home. We have these heartbreaking pictures of 3 year olds that can't really be with their mom that are communicating with their mom through a screen or through a glass door.

There's going to be a longterm sequela to those kinds of things. Because of that, we create this better together fund, like I said, over a few million dollars. Cause you know, yes, people might have their kids at home from school. They might have an 80 year old to take care of. They might have trouble getting food. Let's say somebody cleans the rooms of our hospitals, you're going to work every day in the middle of COVID patients and then going back to that environment. We really try to, as best we could, say that the number 1 thing was going to be our employees. We had a good start at PPE. We we rented a hundred ventilators at about $300,000 a month.

I really feel that everybody went in at full throttle. As I mentioned, our vaccine center, I came up with a multifaceted interdisciplinary collaboration around this rabies carrier vaccine. One of our campuses is a textile design university. They started to work together on how you could reuse and clean PPE and N95 mass. So we went all in.

You spoke a bit about the financial strain that this is putting on not just 1 health care system, but all health care systems right now. What is going to be needed to recover? Has it led to any problems in the near term in terms of what you're able to do?

Not in the acute term. But we're a 14 hospital, $6 billion in revenue, A-rated system. We have more potential resources than most. Having said that, most nonprofit hospitals, even before this crisis, were running on 1, 1 and a half percent margins. If you think about a 1 or 1 and a half percent margin for a place like us that's $90 million net operating income, that's not that much across a large system to reinvest.

The feeling is that hospitals of our size lose between a $100 million and $150 million dollars in a month. So that $90 million might be a $300 million loss. Some of it will get mitigated by the CARES act, but not nearly enough. And then the question also becomes, when do you start gearing up nonessential cases? We've talked about once we get on the other side of the surge, trying to at 3 or 4 non-COVID hospitals. It sounds good to lay people that we're not doing elective cases, but surgery is never elective for the person that's having it, right? We don't do surgery for the hell of it. If you need a hip replacement we consider that a non essential surgery. We're still doing obviously heart transplants and pancreatic cancer surgery, but a hip replacement to most people is not really that elective long term.

The quicker that we can get to those cases in a way that preserves PPE, the better chance we'll have. If not, you're going to start to see mass layoffs and furloughs across health care. Remember, health care is a huge part of the employement market. He's here in New Jersey. We have three hospitals in New Jersey. I think something around 30% or 35% of the employees there are people employed in New Jersey or in a health care related field. Well, you know if we go much longer, those people are gonna start to be effective, affected, affect you know, in, in a, in a way similar to the other, other small businesses. To this point, most health systems have tried to hold onto their, even staff that isn't being used right now.

So, so it's a, I think it's a real dilemma. You're gonna run into this very shortly. How much autonomy do you give to each system to make those decisions? And, and, and, you know, I don't think we should put people at risk. By the same token, we can't wait till six months from now to be doing a, you know, hip and knee replacements told there's zero chance that, that nobody can never again go it. Okay. Both of those extremes. Correct. That's completely fair. I mean, and there's, there's concerns about what the physical and mental health consequences would be if, if, you know, some of these things that are considered, you know, not essential, but you know, if they fall to the wayside for something like six months, that that has a significant healthcare burden. Yeah. Well in some respects it's even worse than that Grant because so we have a college of population health and our folks have been doing some studies about, no, it's not just, you know, people that need procedures.

It's also people not getting any screening procedures. Does that mean women are not getting mammograms? And then what we're very, very, very worried about is the people would be afraid to go into the hospital to get a colonoscopy or a mammogram because they'll be afraid to get covert even after those are done. So, so, you know, we've started to calculate the [inaudible], okay, there's the risk of one person getting covert post, but the risk of somebody, you know, how many 60 or 70 year olds not getting a colonoscopy for two years, we'll get colon cancer. So it's not, it's not a simple equation. What would I have talk to our senators and Congress people about as well. We need to have a really smart discussion about this is there's a big difference between having 50,000 people in Yankee stadium. That shouldn't happen for a very long time.

Sorry, baseball fans. But that's like, that's not essential. And that shouldn't happen for a very long time with saying hospitals and in non hot spot areas can start to do elective surgery. And by the way, not every state's at the same we see on [inaudible] on the cable news everyday New York. And, and I've compared this to, you know, w when there's terrorism in the middle East and Israel or whatever, people that don't know, think, boy, that must happen every day. You know, I can't go to Israel. Every place in Israel must be unsafe. Well, no, it's just cause you've seen it on TV. Not every place is like New York or Detroit or new Orleans. You know, I have a cousin who's an ICU nurse in Arizona. Yeah. They're sitting there with their hospitals 30% full with almost no coconut patients. You know, now they might get a surgery a little bit later, but let's say they don't, you know, th then again, we have to treat those States and those municipalities differently than, than obviously New York or Rome, those kinds of things.

So, so I think we're gonna need a level of, of customization, being smart about public health, economic health, and other health, you know, that that isn't just, Oh, if you think we should open up anytime before there's a vaccine and we shouldn't socialize the isolate till a year from now, you don't care about it. Public health. No, that's not true. By the same token, it's not helpful to say on April 30th, we're going to open everything and you know, let's play baseball.

That's not smart either. So I'm hoping that are that are legislators are getting together and talking to the right. Well, right. So often, excuse me. So often it is presented as an all or nothing, right? Yeah, choice that we're, we're facing in terms of balancing the priorities here. I don't think that has to be the case either. I think, look, I think when you look at, I mean one of the things that we should really do is look at countries that have been successful in managing this and you know, too that I've looked at are Japan and South Korea and you know, you know, both of come on the postcode side got some really smart things shift mentality's not getting, a lot of people are trying not to get [inaudible] a lot of people together, but opening up businesses on a segmented I think.

I think once we get lot more testing available, I think that we might face a future where if you and I want to go to a restaurant together, we'll have to show our little, you know, we're coven negative card. You know you know, those kinds of things. But, and you'll always have a public health professional say yeah, but you can have antibodies and there's cases that as still we're not, we're never going to get to zero. And you know, my only argument with some of the public health folks that I've talked to and seen is their job is to get to a 0.0% risk. And in most cases that's a wonderful thing. My daughter's got her doctorate in public health and I love that mentality. That mentality will make a lot more people sick, you know, with other things. [inaudible] And kill the United States as we know it. By the same token, we can't do stupid things. So I don't have all the answers, but I know that it's going to be a very complex three dimensional chess discussion around, you know, how we maintain the health of the country and the health of the majority, the vast majority of the people in the country, with the understanding that by doing that, it will always be some risk to any individual going to a restaurant or going towards. 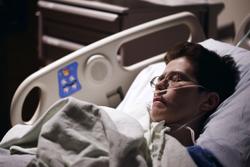