A pair of recent studies suggest that the ability of people with blood cancers lymphocytic leukemia and multiple myeloma to produce antibodies in response to COVID-19 vaccines is impaired.

Vaccines against coronavirus disease 2019 (COVID-19) may be less effective among patients with blood cancers, according to new studies published in Blood that found the antibody response to mRNA vaccines to be impaired in patients with chronic lymphocytic leukemia (CLL) and multiple myeloma (MM).

The first study included 167 patients with CLL in Israel who received two doses of BNT162b2, the mRNA COVID19 vaccine developed by Pfizer and BioNTech.

“The antibody response to BNT162b2 mRNA COVID19 vaccine in patients with CLL is markedly impaired and affected by disease activity and treatment,” lead author Yair Herishanu, MD, associate professor in hematology and head of the CLL service at the Tel Aviv Sourasky Medical Center in Israel, told Contagion. “Vaccinated patients with CLL should continue to adhere to masking, social distancing, and vaccination of their close contacts should be strongly recommended.”

Antibody response rates varied among CLL patients, with those under treatment at the time of vaccination seeing the lowest rate (16%), followed by 55.2% among treatment-naïve patients and 79.2% among those who had obtained clinical remission.

The type of treatment received also was associated with differences in antibody response rates, which were 16% among those treated with BTK inhibitors (ibrutinib or acalabrutinib) and 13.6% for venetoclax. None of the patients exposed to anti-CD20 antibodies within 12 months of vaccination showed antibody response.

“A longer follow-up will be required to assess the clinical outcome of the patients with CLL who have been vaccinated, including the infection rate, disease severity and the usefulness of a booster dose,” Herishanu said. “Other aspect of vaccine response known as the cellular response and how long the immune response to the vaccine is maintained should also be studied.”

Patients with CLL should still get vaccinated and consider doing so before the start of CLL treatment, Herishanu said.

BNT162b2 was the first COVID-19 vaccine to receive emergency use authorization from the US Food and Drug Administration and was the only vaccine in use in Israel at the time of the study, which took place from December 2020 through February 2021. Investigators expect that the other mRNA vaccine with EUA, developed by Moderna, would likely have similar results.

The other study included 48 patients with multiple myeloma in Greece, 72.9% of whom were receiving anti-myeloma therapy, and 104 health controls. Both groups had a median age of 83.

“The aim of this study was to evaluate the development of neutralizing antibodies (NAbs) against SARS-CoV-2 after the first dose of the vaccine in myeloma patients,” lead author Evangelos Terpos, MD, PhD, of the National and Kapodistrian University of Athens in Athens, Greece, told Contagion. “Our knowledge from vaccines against other viruses have suggested that the response of myeloma patients is lower compared to healthy individuals. The key message of our study is that the first dose of BNT162b2 vaccine produces low levels of NAbs response in elderly myeloma patients compared to controls of similar age.”

Investigators measured antibody titers on day 22 after the first dose of the vaccine but before administration of the second dose, and the median response was 20.6% neutralizing antibodies among MM patients compared with 32.5% among healthy controls. Only 8.3% of MM patients had NAb titers of 50% or greater compared with 20.2% of healthy controls. That is the level considered to correspond to clinically relevant viral inhibition. 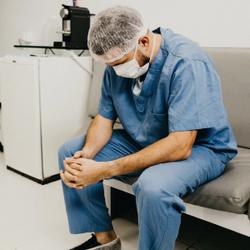 Health Care Utilization in the Months After COVID-19 Infection