New Republican-led healthcare plan gains traction as past-presidential candidate, Bernie Sanders, puts forth a plan of his own.

The day Senator Bernie Sanders announced his plan to expand Medicare coverage to include all 323 million Americans likely won't go down as a momentous one in US history.

But, I will still remember exactly where I was when he declared his intentions—Las Vegas. And, in this case, what happened there, won't stay there. 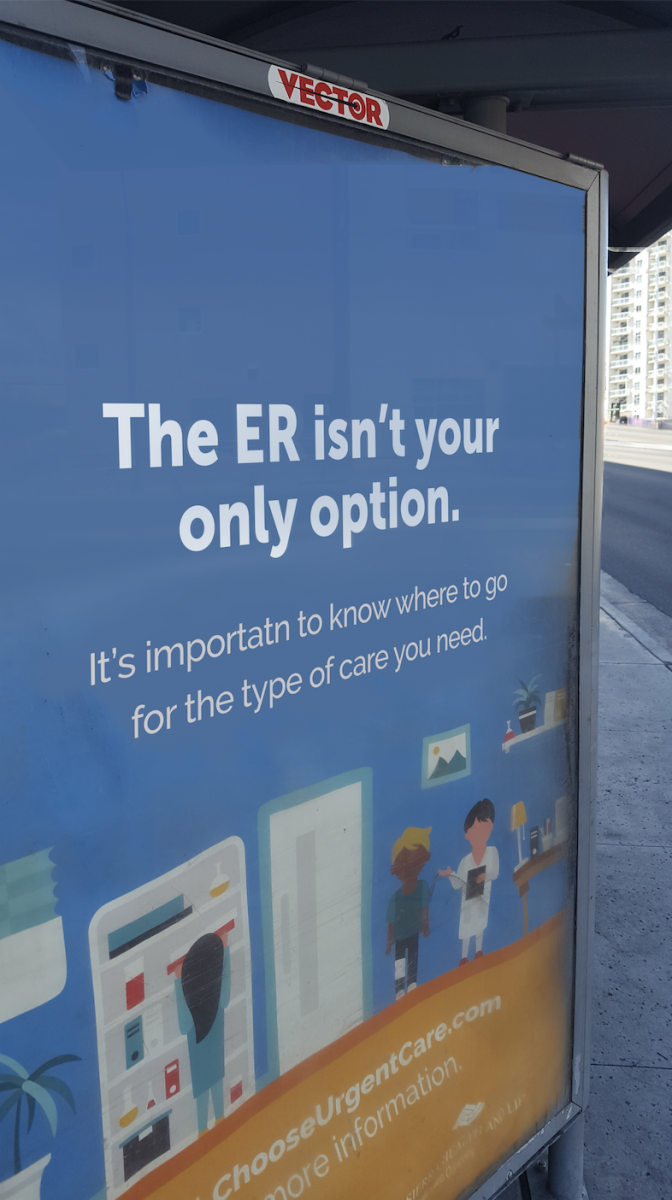 Ad: The ER isn't your only option.

That’s because, not long after the reading of the Sanders bill—which has some support among Democrats in both the Senate and the House of Representatives, but still has a snowball's chance in you-know-where of ever becoming law&mdash;I noticed an ad posted on several bus-stop shelters across on and around the famous Strip. It read, “The ER isn’t your only option,” and it served as a stark reminder that, even under the Affordable Care Act (ACA), there are still millions of Americans who lack adequate (or perhaps any) healthcare coverage and have to rely on emergency care. And Nevada is one of the states that created an insurance exchange following the ACA’s passage.

Indeed, Sanders' bill comes at a time when the Republican-controlled Congress is still licking its wounds from failing to “repeal and replace” the ACA, a cornerstone campaign promise for President Trump and the goal of many GOP legislators since Obama's signature bill was signed into law in 2010. However, it’s a political non-starter in part because Democrats, facing stiff challenges in their home districts as the 2018 mid-term elections approach, lack the political fortitude (perhaps rightfully so) to stand with Sanders on this issue.

Furthermore, yet another Republican plan—this time, proposed by senators Lindsey Graham, Bill Cassidy, Ron Johnson, and Dean Heller&mdash;is reportedly gaining traction among GOP legislators. If approved, the bill would transfer billions of dollars in tax credits and Medicaid funding to states in the form of block grants; at the state’s discretion it is believed millions who receive healthcare coverage under Medicaid would be left uninsured. Reports suggest that the bill’s sponsors hope to push it through the Senate prior to September 30, 2017, when “special rules” that would enable it to pass with just 50 votes would expire.

Still, politically, Sanders has nothing to lose in putting forth his proposed bill. At 76, his unsuccessful pursuit of the Democratic nomination in the 2016 presidential election was likely his last electoral rodeo, and he remains popular in his home state of Vermont.

And, even the most dyed-in-the-wool conservatives have to agree that any plan that proposes to tackle the issue of rising healthcare costs is worth at least discussing. The United States spent $3.2 trillion on healthcare in 2015, according to Centers for Medicare and Medicaid Services statistics, and even under the ACA, nearly 30 million Americans remain uninsured, making healthcare services prohibitively expensive for many individuals and families. In fact, it could be argued that America still effectively has 2 different healthcare systems: one for those with means, and another for those without. Indeed, a commentary published on August 31, 2017 in the New England Journal of Medicine describes how differences in infrastructure and funding have influenced care and outcomes in the management of hepatitis C virus among veterans and Native Americans.

And when emergencies strike—think: an infectious disease outbreak or, worse, a pandemic&mdash;such cost challenges can seem crippling. In Las Vegas, officials are dealing with a potential crisis after a middle-school teacher contracted, and ultimately died, from tuberculosis. More than 100 students and school personnel had to be screened for the disease (with no positive test findings reported as yet).

People in Las Vegas are also still talking about a legal settlement between the state and the family of a man who died from Legionnaires’ disease in 2015 after he was exposed to the bacteria while living at a state run veterans' home in Boulder City, Nevada. The total tab: $750,000. The concern isn't so much about the money, but rather that the Legionella bacteria was able to infiltrate the facility in the first place, and that residents got sick. There has also been some concern in recent months regarding Legionella bacteria in swimming pools at some of the casinos, according to reports.

Making Medicare available to all, as Sanders advocates, wouldn't prevent these types of problems, nor make them any easier to manage for the federal, state, and local governments involved. However, one could argue that despite the trillions being spent currently by the federal government, and individual Americans (via taxes, insurance premiums, and direct spending), our present system is still too often caught unprepared when crisis strikes.

Given what we know, and what's happening in places like Las Vegas, what’s so wrong with considering a drastic change?