Treatment Options to Address the Threat of Carbapenem-Resistant Enterobacteriaceae

New agents are in development, but none represent a magic bullet for the problems that CRE infections present.

The global emergence of resistant Enterobacteriaceae that produce carbapenemases has furthered the development of serious, difficult-to-treat infections associated with significant morbidity and mortality.1,2 Antimicrobial agents currently used for treatment of infections caused by carbapenem-resistant Enterobacteriaceae (CRE) include carbapenem combinations, polymyxins, fosfomycin, tigecycline, aminoglycosides, ceftazidime—avibactam, and meropenem–vaborbactam. Trials supporting their clinical use are scarce, and many of the agents are limited by toxicities and pharmacokinetics disadvantages. New beta-lactamase combinations have been made available within the last few years, and early results suggest they are safer and more efficacious for the treatment of CRE infections compared with some of the older agents, particularly polymyxin regimens. Furthermore, new treatments with activity against CRE are currently being studied to help mitigate the threat of resistance.

Combinations of carbapenems have been utilized for the treatment of CRE infections, generally when administered as prolonged or continuous infusions and in combination with other agents.3-7 Although carbapenem-based regimens for the treatment of infections caused by CRE have demonstrated some utility, evidence is limited. If such a regimen is used, the pharmacodynamics of the carbapenem used must be maximized through prolonged or continuous infusions.

The polymyxins, colistin and polymyxin B, have been revitalized for the treatment of resistant Gram-negative infections, including those caused by CRE. However, in vitro studies suggest that polymyxin monotherapy may lead to emergence of resistance; therefore, a polymyxin should be administered in conjunction with other agents, including carbapenems.8-10 Appropriate dosing is also a concern for these agents, since the results of modern pharmacokinetic and pharmacodynamic studies indicate that dosing recommendations in both polymyxin B and colistin package inserts are inaccurate.11,12 Also, both agents have the potential to cause nephrotoxicity and neurotoxicity, but several comparisons have shown a significantly higher risk of acute kidney injury in patients who received colistin compared with polymyxin B.13-15 Trial results also show that beta-lactamase inhibitor combinations have more favorable safety and efficacy results than do polymyxin-containing regimens.

Fosfomycin, another treatment option for CRE, has shown activity against organisms producing carbapenemases.16 It is recommended in combination with other therapies, since resistance develops rapidly when fosfomycin is used as monotherapy.17 Only 2 case reports showing that it has been clinically effective against infections caused by CRE have been published.18 In addition, the utility of fosfomycin is limited to urinary tract infections (UTIs) in the United States, since it is available only as an oral formulation and has moderate absorption. A current study of intravenous fosfomycin for UTIs (NCT02753946) may lead to US Food and Administration (FDA) approval.

Aminoglycosides are also well-established agents that have variable activity against CRE isolates19 and appear to be a treatment option for CRE-caused UTIs.19-21 For other infections, however, evidence is lacking; study results have shown mortality rates ranging from 6.3% to 80% in patients who received aminoglycosides alone.22 Yet they may have a place in therapy when given in combination with another antibiotic. A systematic review of the results of 20 clinical studies evaluating patients being treated for infections caused by CRE showed that the combination of aminoglycosides with a carbapenem was associated with the lowest mortality rates.23 However, beta-lactamase inhibitor—based combinations were too new to be included in this review. Aminoglycosides also have an adjunctive role in as aerosolized agents in patients with pneumonia caused by CRE,24 but when considering these agents, it is important to weigh the benefit against their well-known toxicities.

Tigecycline, a glycylcycline tetracycline, is frequently active in vitro against CRE.25 However, clinicians should be cautious when using tigecycline since it has limitations. Resistance development during therapy has been seen in the setting of CRE bacteriuria.26 Pharmacokinetic limitations, including bloodstream concentrations that average below the Clinical and Laboratory Standards Institute Enterobacteriaceae breakpoint of 2 mcg/mL and elimination via the biliary tract, indicate limited utility for UTIs.27 Results of a clinical study indicating that tigecycline was statistically inferior to imipenem for the treatment of ventilator-associated pneumonia point to the possibility that higher doses might be needed.28-31

Ceftazidime—avibactam is a newly approved combination agent with activity against most CRE. Avibactam has a diazabicyclooctane structure that is not based on the beta-lactam ring and does not function as a suicide substrate as beta-lactam–based inhibitors do. It is stable against Klebsiella pneumoniae carbapenemase and oxacillinase-48—like enzymes found in CRE, but not against New Delhi metallo-beta-lactamase (NDM) enzymes.32

Two small comparative studies have shown superiority of monotherapy ceftazidime—avibactam over other regimens in treating a variety of infections caused by CRE. The first study retrospectively evaluated CRE bloodstream infections and found that ceftazidime– avibactam treatment in these patients was associated with significantly higher clinical success (11/13; 85%) compared with those who received other treatment regimens, including a carbapenem plus aminoglycoside (12/25; 48%; P = .04), a carbapenem plus colistin (12/30; 40%; P = .009), and other regimens (15/41; 37%; P = .004).33 The second study was a multicenter observational study comparing ceftazidime—avibactam with colistin for the treatment of multiple CRE infections. The results of a multivariate analysis among patients treated with ceftazidime–avibactam versus colistin indicated that all-cause in-hospital mortality after the start of treatment was 3/38 (8%) versus 33/99 (33%), respectively. It should be noted that resistance to ceftazidime–avibactam has been reported to arise during treatment, particularly in patients receiving prolonged therapy with uncontrolled sources.34,35 It is imperative that clinicians are aware of the possibility of emergent resistance leading to ceftazidime— avibactam treatment failure, and that they retest susceptibilities if CRE are persistent in cultures.

An agent combining meropenem and vaborbactam received FDA approval in August 2017. Vaborbactam is a novel, boron containing, serine-beta lactamase inhibitor that works by creating a covalent bond between its boron moiety and the serine side chain of beta-lactamases, preventing the beta-lactamases from destroying beta-lactams. The clinical data supporting meropenem—vaborbactam for infections caused by CRE are limited to those resulting from a single small trial, TANGO-2, but it was a prospective, randomized study. TANGO-2 investigated the efficacy of meropenem–vaborbactam compared with investigator-chosen best available therapy (BAT) in patients with serious infections caused by confirmed or suspected CRE. Randomization in the trial was stopped early after the results of an interim analysis showed statistically significant differences in favor of meropenem–vaborbactam over BAT for clinical cure at the test of cure visit (meropenem–vaborbactam 57.1% [16/28]) vs BAT 26.7% [4/15]; absolute difference 30.5% (95% CI, 1.5%-59.5%; P = .04).

As new agents emerge, resistance to them is inevitable. Neither ceftazidime—avibactam nor meropenem–vaborbactam are active against CRE-expressing metallo-beta-lactamases such as NDM enzymes, which are currently rare in the United States but common in parts of Asia. Several drugs in late-stage clinical development that are active against CRE include cefiderocol, plazomicin, eravacycline, and imipenem–relebactam (Table). The therapeutic indications of these pipeline agents for the treatment of infections caused by CRE, if they are approved, will take time to determine.

Infections caused by CRE are difficult to treat. Though limited in number, data have emerged that support the roles of ceftazidime—avibactam and meropenem–vaborbactam over polymyxin-based regiments for these infections. Clinicians must be vigilant not only for the detection of CRE infections, but for new literature that explores best treatment practices, as investigators begin to describe their experiences. New agents are in development, but none represent a magic bullet for the substantial problems that CRE infections present. 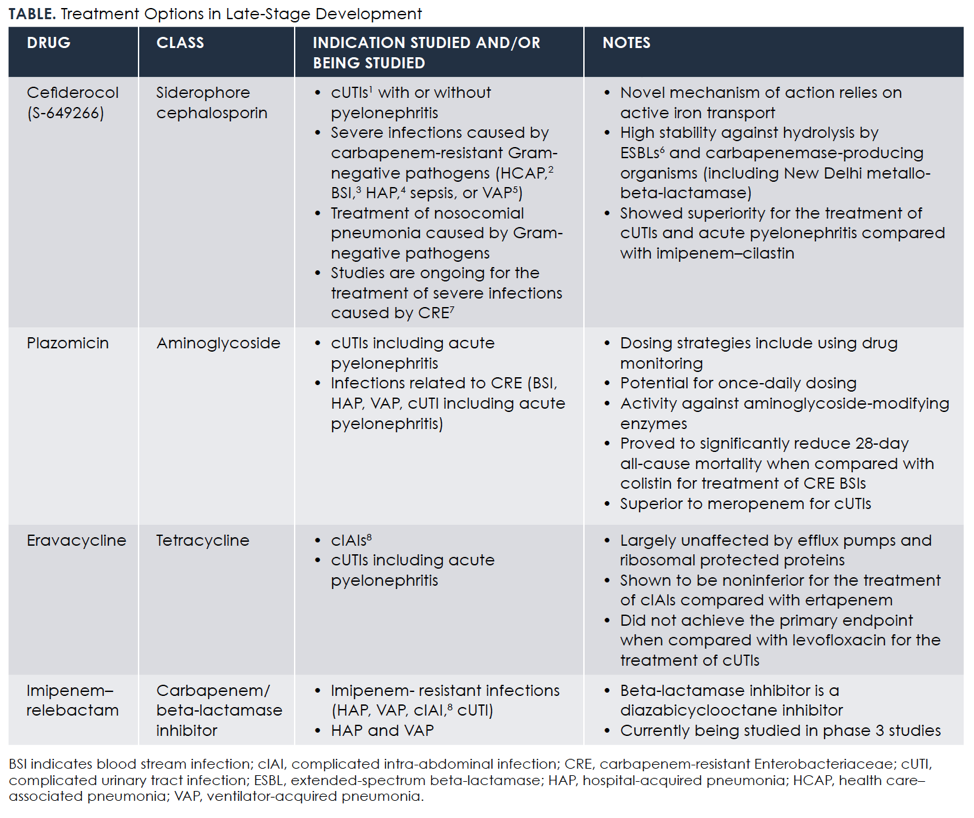