HIV surveillance data is being used to populate an interactive map, capable of depicting the impact of HIV and mortality in the United States on national, state, and local levels.

HIV surveillance data from the Centers for Disease Control and Prevention (CDC) is being used to populate an interactive map, capable of depicting the impact of HIV and mortality in the United States on national, state, and local levels.

The interactive map, AIDSVu, illustrates higher rates of infection and death in Southern States; racial disparities in HIV infection; and a rise in HIV diagnoses among the youth. In addition, according to a press release on the map, “two-thirds of all new HIV diagnoses in 2015 occurred in 2.5% of US counties."

The South accounts for nearly 37% of the country’s population and more than half of all new diagnoses and deaths among individuals diagnosed with HIV. Five US cities—–all located in the South––had the highest rates of new diagnoses: Miami, FL; Jackson, MS; New Orleans, LA; Baton Rouge, LA; and Atlanta, GA.

Although the overall rate of new HIV infection is steadily declining, certain demographic groups and the opioid epidemic have played a role in HIV infections, according to the authors.

Overall, HIV diagnoses among all persons in the United States decreased 18% between 2008 and 2015. However, young persons aged 13 to 24 years accounted for more than one-quarter of all new HIV diagnoses and increased by 2%.

“AIDSVu maps tell the story of the long-term disproportionate impact of HIV in the South, and of the areas where new patterns of transmission are emerging,” Dr Patrick Sullivan, principal investigator of AIDSVu, said in the press release. “The burgeoning opioid abuse and intravenous drug use epidemics, and the resulting transmission of HIV and other infectious diseases, will have dramatic repercussions for how the HIV epidemic evolves in the future. Using local data will allow policymakers and researchers to stay aligned with the realities of where HIV is entrenched and where it is emerging, to strengthen surveillance, and to provide response prevention strategies to mitigate these serious risks.”

Now in its seventh year, AIDSVu is a project of Emory University’s Rollins School of Public Health in collaboration with Gilead Sciences, Inc, according to the release.

New features for the 2017 map include: state and county level data showing HIV prevalence for 2014. (See pic: Rates of Persons Living with Diagnosed HIV, 2014) , and new HIV diagnoses year-over-year from 2008 to 2015; ZIP code-level maps showing HIV prevalence in 2015 for 41 US cities, which represent more than 60% of the HIV epidemic in the United States. This year ZIP code-level data were added for Seattle, WA; ZIP code-level new HIV diagnoses data (2001 to 2015) for all 41 cites on AIDSVu; and mortality data at the state level, illustrating rates and numbers of deaths that occurred among people with HIV.

Although recent news about advancements made in treatment and prevention of HIV has been positive, such as progress being made towards an HIV vaccine, there is still a lot of work that needs to be done, particularly in at-risk populations. The AIDSVu map may aid in locating populations in most need of attention, and could help curtail another increase in infections. 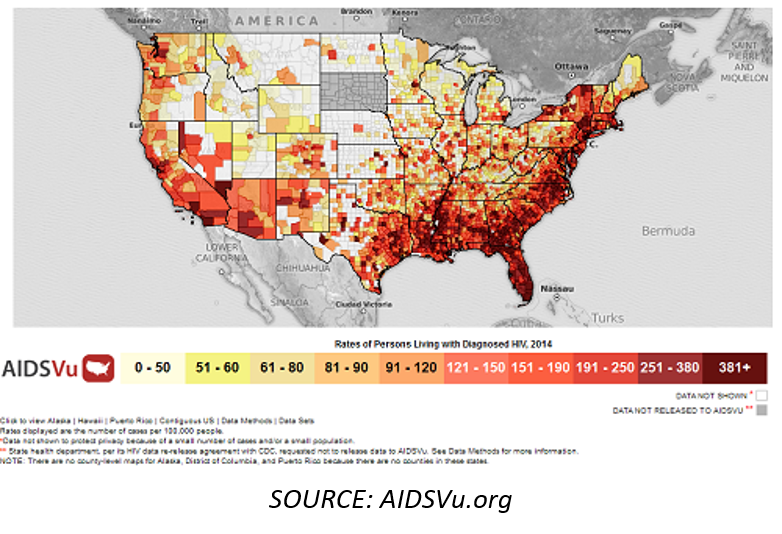