Health system continues to lead the way in stewardship; hopefully more will follow.

Investigators recently discovered genes linked with antibiotic resistance in a remote region of the Arctic, highlighting the truly global scope of the threat of infections unsusceptible to currently available drugs.

And yet, recent data suggest that nearly 1 in 4 health care institutions in the United States have yet to implement an antibiotic stewardship program as called on to do by the US Centers for Disease Control and Prevention (CDC) by 2020, Contagion® reported last November.

But is it more complicated than that?

“One of the greatest struggles for most hospital systems is lack of resources, in terms of personnel,” Lisa Davidson, MD, medical director of the Antimicrobial Support Network at Atrium Health, told Contagion®. “A lot of the hospital systems that reach out to us seeking advice are loathe to allocate resources, including physician and pharmacy time, to stewardship programs, because they won’t see immediate returns on the investment.”

Dr. Davidson and her colleagues at Atrium Health have always been ahead of the curve when it comes to stewardship. The system, which includes 45 hospitals and employs more than 60,000 people, was among the early adopters of the CDC’s Core Elements initiative (initially released in 2014) and, as a result, has seen a 25% decrease in overall antibiotic prescribing among its providers over the past 5 years alone. By the end of this year, the largest hospitals in the system will all be reporting into the CDC’s National Health Safety Network surveillance program for antimicrobial use and resistance, according to Dr. Davidson. More than half of Atrium’s facilities hope to be reporting into the program within 2 years. 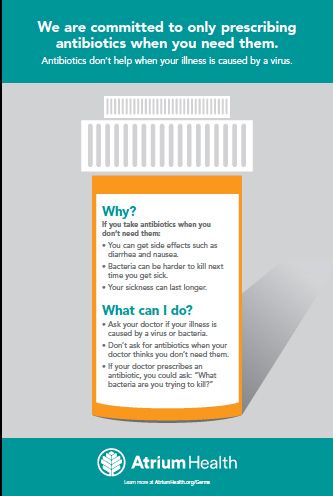 Underpinning the system’s efforts to address inappropriate antimicrobial prescribing within its ranks has been education—of both providers and patients. Patient education initiatives have included straightforward explanations of Atrium’s policy on antimicrobial prescribing (see poster pictured), through displays in lobbies and waiting rooms in all facilities, and these have echoed provider-targeted messaging as delivered via seminars, as well as “handshake stewardship,” as Dr. Davidson called it, in which “stewards spend time working with providers on floor and [communicating via] texts and phone calls” multiple times per week.

Last year, Atrium launched its Outpatient Antibiotic Stewardship initiative, which allows clinicians in the outpatient setting to track antimicrobial prescribing. Dr. Davidson’s team has also partnered with the system’s largest service lines to ensure that all immunocompromised patients—including those undergoing solid organ transplant and those with HIV/AIDS&mdash;are prescribed appropriate treatments for any infections.

“When providers are on-boarded into the system, they all attend an orientation that describes what our standards are and what our recommendations are with regard to antimicrobial use,” Dr. Davidson said. “They know our ‘best practices’ before they start treating patients.”

And, following up on a study assessing how effective education programs have been at the provider level, she and her colleagues hope to release findings of a patient survey on antimicrobial use later this year. The survey, which includes responses from more than 200 patients interviewed at 8 different Atrium care facilities, should provide some insight into what patients understand about resistance and what their expectations are for treatment when they see a clinician because they aren’t feeling well.

The lessons learned at systems such as Atrium Health come at a time when politicians are paying greater attention to issues related to resistance. Today, January 30, 2019, the Presidential Advisory Council on Combating Antibiotic-Resistant Bacteria is meeting in Washington, DC, to discuss new priority areas for the next iteration of the government’s 2020-2025 National Action Plan for Combating Antibiotic-Resistant Bacteria.

During the meeting, Tom Lowery, PhD, chief scientific officer of T2 Biosystems, will be presenting on the company’s T2 Magnetic Resonance technology, which is designed for use in the diagnosis of bloodstream infections. T2 also manufactures the T2Bacteria Panel and T2Candida Panel, the only US Food and Drug Administration-cleared assays for the detection of sepsis-causing pathogens and resistance genes that don’t require blood cultures.

“At Atrium, we’ve embraced a collaborative approach to patient care,” Dr. Davidson noted. “We’re really concerned about the overall, long-term health of our patients, and antibiotic stewardship and infection prevention is part of our long-term vision.”

As it should be, by now, at every health care facility in the United States and around the world.