This could be an important feature in potential vaccine development. 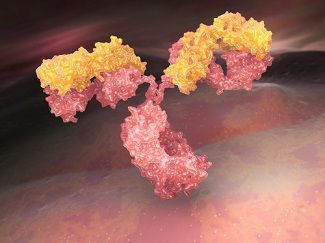 A new study by researchers at MassBiologics of UMass Medical School published in Nature Communications suggests that COVID specific IgA monoclonal antibodies may provide effective immunity in the respiratory system against the coronavirus 2019 (COVID-19).

This could be an important feature in potential vaccine development.

"We were excited to learn that antibodies to SARS-CoV-2 are more effective in binding to and neutralizing the virus when they are in the sIgA isotype of antibody, compared to the usual circulating IgG antibodies," Mark Klempner, MD, executive vice chancellor for MassBiologics and professor of medicine, said. "In nature, sIgA antibodies coat mucosal surfaces like the respiratory, GI and GU tracts, where they are stabilized by the mucous layer on these surfaces. There, they perform the important function of preventing binding of a pathogen to host cells, thus preventing infection."

This all began several years ago when MassBiologics developed an IgG monoclonal antibody that was effective against a similar virus, SARS-CoV. That first SARS virus caused alarming illness, but then disappeared. While they were ready to initiate a clinical trial at that time, they decided to save the research materials associated with that work.

When SARS-CoV-2 began to spread, MassBiologics researchers realized that that first monoclonal antibody (MAB) might help with this new infection. They launched the process of resurrecting the old SARS program, retrieving frozen hybridoma cells that had been developed.

Although there was 90% similarity between the two coronaviruses, the monoclonal antibody exhibited no binding to the current coronavirus. MassBiologics then evaluated another MAB from that earlier work, which was also only weakly effective.

Still Wang and colleagues thought about their experience with a separate research program to develop "secretory IgAs (sIgA)," antibodies that play a crucial role in immunity on mucosal surfaces.

MassBiologics has been investigating sIgA in the GI tract as a possible therapeutic to prevent gastrointestinal infections. Would similar anti-SARS-CoV-2 sIgA produce passive mucosal immunity in the respiratory tract, where COVID-19 disease is incredibly damaging?

The approach worked, producing an antibody with binding affinity and neutralization activity. This antibody was designated MAb362.

"So our search which started during a coffee break conversation has resulted in a unique IgA antibody that could potentially be applied through mucosal administration, in combination with other systemically administrated therapeutics for direct mucosal protection," Klempner said.