Can a Pouch the Size of a Ketchup Packet Prevent Mother-to-Child Transmission of HIV?

A team from Duke University’s Developing World Healthcare Technologies Lab have discovered a way to extend the lifespan of antiretroviral drugs in order to prevent mother-to-child HIV transmission in developing countries.

Although the Centers for Disease Control and Prevention (CDC) recommends that all pregnant women get tested for HIV as early as possible, some are unable to do so. Often, particularly in underdeveloped countries, access to testing and antiretroviral drugs, such as Nevirapine and Zidovudine, is very limited—this puts unborn children at risk of acquiring the infection from their pregnant mothers who are positive for the virus. However, this mother-to-child transmission can be prevented. Students from Duke University’s Developing World Healthcare Tech nologies Lab have developed a medical device to aid in this effort.

According to the CDC, close to 8,500 HIV-positive women give birth each year, and each day, 1,000 children acquire the virus, the majority as newborns. In total, the United Nations says that mother-to-child transmission in the developing world leads to a 260,000 newly ac&shy;quired infections in children annually.

Although preventing transmission is possible with the assistance of antiretroviral drugs, these drugs need to be administered within 24 hours of birth—at most, 72 hours&mdash;in order to ensure effectiveness. Many clinics in developing areas that have been hit especially hard by the virus&mdash;such as sub-Saharan Africa&mdash;have these drugs available, but the majority of pregnant women tend to deliver their babies at home. Therefore, their babies face an especially high risk of acquiring the virus during the birthing process or through breastfeeding. Additionally, according to a press release, “Previous attempts to give the medication to newborns using syringes, cups, and spoons were failing because the [antiretroviral] was degrading before it could be administered.” Therefore, it became obvious that the problem was related to drug storage and delivery. 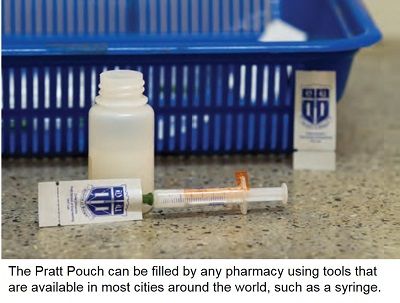 In an effort to remedy the issue, Robert Malkin, PhD, a biomedical engineering professor at Duke University, and his team—comprising graduates, undergraduates, and postdoctoral students&mdash;invented a packaging de&shy;vice dubbed the “Pratt Pouch,” a “foilized polyethylene pouch,” that would extend the lifespan of the antiretrovi&shy;ral drugs to up to one year. The pouch, which resembles a ketchup packet, is designed to be filled and closed with an electric heat sealer by local pharmacists and then dis&shy;tributed “during antenatal care visits at district hospitals, clinics, and on outreach trips to more rural communities by nurses and healthcare workers,” according to the press release. After distribution, mothers can simply squeeze the contents of the pouch in their newborn’s mouth.

According to Dr. Malkin, it was designed for easy trans&shy;port and delivery, meaning it is “easy to open without spilling the contents.”

When speaking with Contagion™, Dr. Malkin explained the inspiration behind the design of the pouch: “The pouch was designed after another organization tried to solve the problem for about 7 years. I met the head of that project at the coffee pot of a conference and was intrigued by the problems they had found with their various solu&shy;tions. I asked an undergraduate to investigate the leading hypotheses for why standard methods don’t work. (Your mom almost certainly gave you liquid medications in a spoon, cup, syringe, or eye dropper—all of those destroy the medication before it can be used.) After many months designing experiments (mostly failed), we were able to determine that leading hypotheses were wrong. Further&shy;more, once we knew what the problem really was, it was very straightforward to design a solution.” 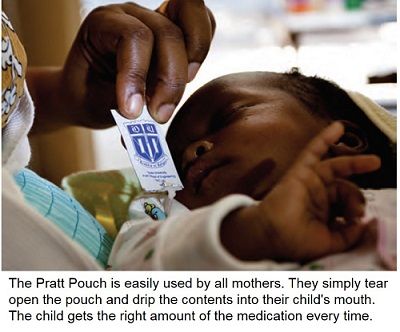 According to the press release, after the Pratt Pouch was introduced to Zambia, medicinal access to antiretro&shy;viral drugs increased from 35% to 92%, which “equate[d] to an almost 10-fold drop in the number of children becoming HIV positive.” The pouch has also proved so successful in Ecuador that Dr. Malkin estimates it will be available throughout the country by 2018.

In comparison with Ecuador, Uganda has been hit harder with the virus. To address this, the Elizabeth Glaser Pediatric AIDS Foundation is administering the pouch in the country and Dr. Malkin hopes they reach at least 40% of mothers living with the virus there.

When speaking of the implications of the pouch, Dr. Malkin told Contagion™, “If the project in Uganda is suc&shy;cessful, I feel that many neighboring countries can imme&shy;diately adopt the solution on a country-wide scale. This is because Uganda is developing the capacity to make suffi&shy;cient pouches for their own country and beyond.”

The Pratt Pouch is now commercially available through Maternova.