Investigators surmise a natural bat exposure within certain areas of the world may correspond with lower COVID-19 incidence rates.

In a paper written this year, researchers reported that antigens close to SARS CoV-2 proteins which would confer a potential natural immunity were found in greater frequency in tropical areas of Asia and Africa, compared to areas of high incidence rates, like North America and Europe.

In the paper, Jean-Paul Gonzalez, MD, PhD, Department of Microbiology & Immunology, Georgetown University and colleagues hypothesize that tropical areas of Asia and Africa have a natural exposure to coronaviruses and thus have lower transmission rates of COVID-19.

Gonzalez et al looked at bats and exposure to them as related to coronaviruses. Specifically, they tested the presence of SARS-CoV-2 antibodies in human samples collected in the Central African region prior to the emergence of SARS-CoV-2.

“Coronaviruses genome encodes four major structural proteins: spike (S); envelope (E); membrane (M); nucleocapsid (N). The spike-shaped transmembrane S plays an essential role for the host immune response. The S structure comprises two functional subunits: the S1, comprising an N-terminal domain (NTD) and a receptor binding domain (RBD), directed to bind to the host cell receptor (Angiotensin-converting enzyme 2, ACE2); and the S2 that allows the fusion of the virus through the cellular membrane. There is a strong correlation between RBD antibodies and the neutralizing antibodies to SARS-CoV-2 in humans,” the authors wrote.

“Among the 1655 tested samples from Central African populations tested 38.1% and 12.4%, [and] of them presented respectively reacting antibodies against 1 or 2 as compared to 9.5% and 0% for the controls. The S1 antigen shows the highest percentage of positives: 19.64% for African samples versus 2.11% for the controls. Globally, all antigens considered, there is a high significant difference (p- value<10-6) with control samples.”

When in Harms Way
The ongoing challenge is what can be done to mitigate the emergence of zoonotic viruses? Developing countries are where many of the zoonotic viruses emerge, and in these locations people have much more contact with the natural world. As someone who has spent time internationally studying viruses and involved in trying to control and prevent highly pathogenic infectious disease, Gonzalez sees an interconnection between humans, animals and the environment. He has spent a good portion of his career working in low- and middle-income countries (LMIC) performing research projects in life sciences and medicine and focusing on studying diverse and complex pathologies. He has also taught the One Health concept in these areas.

For example, Gonzalez studied Rift Valley Fever (RVF) in sub-Saharan Africa, where the viral disease is most prevalent. In that region, RVF is found in livestock including cattle buffalo, sheep, goats, and camels. People can get RVF through infected mosquito bites or blood, body fluids, or tissues of infected animals.1

Typically, RVF is more severe in animals than humans. People will often be asymptomatic or may experience a milder case that might include a fever, weakness, back pain, and dizziness.1 Although in an estimated 8-10% of people with RVF they can suffer a severe form of the disease that can include symptoms such as eye disease, hemorrhage with excessive bleeding, and encephalitis.

While in Africa, Gonzalez and colleagues did animal biosurveillance on cattle and other livestock. When they found animals were infected with RVF they took steps to ensure the livestock were isolated from the herd and looked to stop the spread of the virus.

In terms of solutions, Gonzalez believes improved technologies for biosurveillance, a better understanding of how humans, animals, environment interact, and new vaccines and therapies can help mitigate zoonotic spread. The foundational biosurveillance work Gonzalez was doing back in the 1980s is still applicable today.

Contagion spoke to Gonzalez about climate change and how it might be exacerbating emerging infectious diseases and human health as well as his work in biosurveillance. 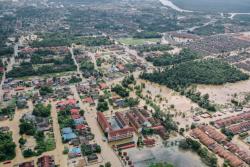