A team of investigators present a new solution to an old problem. 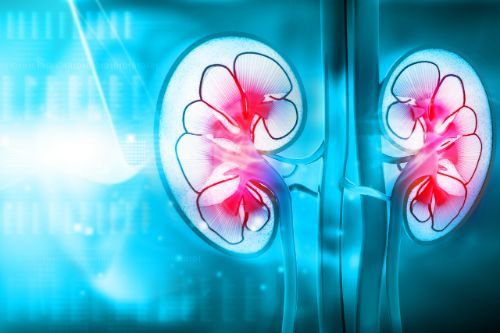 Acute kidney inflammation caused by a bacterial infection, pyelonephritis, can be deadly. Often a result of a urinary tract infection that is ascending from the bladder into the kidneys, this infection can cause symptoms like fever, nausea, vomiting, painful urinary, frequency, and urgency. For most, pyelonephritis causes fever and flank pain.

It is estimated that in the US, acute pyelonephritis occurs at a rate of 15-17 cases per 10,000 females, and 3-4 cases per 10,000 males. The prevalence of this can drastically change depending on several factors, like fluctuating hormones, and women who are sexually active tend to be disproportionately impacts.

For pregnant women with changing hormones, 20-30% will develop acute pyelonephritis. E. coli tends to be the most common bacterial culprit as it often colonizes in the urinary tract and kidneys. In severe cases, it can lead to complete pyelonephritis that can cause septic shock.

Since acute pyelonephritis makes up a pretty considerable medical ailment in the United States and can pose a risk, especially for women, there has been considerable efforts to try and combat it with more effective treatments.

A new study sought to evaluate aminoglycosides instead of antimicrobials as an empirical treatment of those patients hospitalized with acute pyelonephritis.

Published in the Journal of Antimicrobial Chemotherapy, the researchers utilized medical records from January 2017 to April 2019 to study the effects of a new, institutional program that aimed at using aminoglycosides as the empirical treatment for pyelonephritis hospitalized patients.

“Treatment with aminoglycosides was associated with a higher likelihood of in vitro activity against clinical isolates (OR,&thinsp;2.0; P <&thinsp;.001). Death at 30&thinsp;days occurred in 55 (7.6%) versus 145 (11%) patients treated with aminoglycosides and non-aminoglycoside drugs, respectively (adjusted HR,&thinsp;0.78; P&thinsp;=&thinsp; .013)," investigators wrote. "Aminoglycosides were either superior or similar to comparator drugs in all patient subgroups, stratified according to age, glomerular filtration rate, bacteraemia, haemodynamic shock and infection with third-generation cephalosporin-resistant Enterobacteriaceae.”

Furthermore, this analysis found that there was little difference between the incidence of acute kidney injury between either group. While this study emphasizes that these higher rates of in vitro activity and lower overall mortality with aminoglycosides as a treatment protocol for pyelonephritis, investigators noted that there is still more research that is needed.

Another beneficial finding was that these positive outcomes were also met with less excess nephrotoxicity. As acute pyelonephritis is a common cause for hospitalizations, reducing this burden could make a dent in the $2 billion dollars spent annually in the United States.

Efforts to reduce over morbidity, mortality, and be better stewards of antimicrobials, should consider this new study and the pursuit of alternative, more specific treatments for bacterial infections like acute pyelonephritis.