Paradigm Shift in the Management of Clostridium Difficile Infections - Episode 6

Frequency of CDI Recurrence and Impact on Quality of Life

Paul Feuerstadt, MD, FACG, AGAF: The question of recurrence in C difficile [Clostridioides difficile] infection is important because it occurs frequently. It’s estimated that approximately 25% of all individuals who receive either metronidazole or vancomycin will recur. And of those who recur, 40% will go on to recur after that, and 50% to 60% will go on to recur again, and patients get caught in this cycle of recurrence. It is debilitating for the patients and also challenging for providers to handle.

In 2017, Gene K. Ma [MD], et al published a manuscript looking at the OptumRx database at the years from 2001 to 2012. They looked at the incidence of C difficile during that timeframe, and it turns out that the incidence increased 42.7%. However, the incidence of multiply recurrent C difficile, that increased 188.8%, a truly remarkable change, speaking to the increased prevalence in our society, but more importantly, the refractory nature of this infection and the challenges that come with treating it.

In 2020, an epidemiologic study published in The New England Journal of Medicine looked at the Emerging Infections Program through the Centers for Disease Control and Prevention. Within that program they look at 10 counties throughout the United States and then projected data from those 10 counties on a national scale. Overall, in 2017 they estimated that there were 365,200 individuals who were diagnosed with C difficile, a major burden. In fact, they differentiated community-associated C difficile from health care-associated infection. Health care-associated infection was defined as the onset of symptoms greater than 72 hours after admission to the hospital, or within 90 days of discharge.

The impact of C difficile infection on our patients isn’t limited to the gut. This is an all-encompassing infection that also has an impact on patient’s lives and on them psychologically. This is something that I’ve seen through many years of treating and caring for these patients, and something that I know each of you who’s listening to this also has seen, even if it’s not in your conscious element.

C difficile impacts our patients on multiple levels, and as a result, my study group did a retrospective survey of patients with either active C difficile, meaning they’re being treated for C difficile, or a distant history of C difficile infection, asking them about their experience with the infection at present. We asked them about a number of elements, including their symptoms, whether they had abdominal pain, diarrhea, whether they were having fevers and sweats; the psychological element, whether they had stress, anxiety; the adaptational element, whether they were still wearing diapers or they had to change their eating habits; relational elements, including fear of incontinence. When they go to a public place, do they locate the bathroom and make a beeline so that they have a plan in the event that they had fecal urgency? And finally, productivity; do patients feel like they’re productive both in their home life and their professional life? And overall, across the board, patients both with active C difficile infection and with a history, sometimes distant, several years in the past, more than 50% reported that they had a symptom effect still, as well as psychological, adaptational, and relational.

It’s important for us to approach patients with this infection, to treat the infection and minimize the active symptoms, but also treat the entire patient. Listen to our patients, hear what they’re saying. There is a post-traumatic stress disorder that comes with C difficile that we need to acknowledge and allow the patients to express themselves about, and boost their confidence. Explain to them that we’re going to do our best to minimize the rates of C difficile and rates of recurrence from coming back. That will alleviate their fears, treat their anxiety, and treat the patient as a whole. Our goal is to treat the patient as a whole, not just their infection. And we can do that by acknowledging some of the other elements that come with this infection. 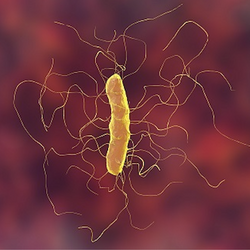