Gastrointestinal Infections Can Be Transmitted to Humans Through Viral Clusters

NIH researchers discovered that norovirus and rotavirus can be transmitted through cloaked viral clusters which exacerbate the spread and severity of disease.

Norovirus and rotavirus are dangerous, hard-to-treat viruses that affect millions of individuals each year. These viruses are known to cause widespread outbreaks in various settings due to how contagious they are. While there is a vaccine available against the rotavirus, there is still a need to determine more about how the viruses are spread.

It was previously accepted that viruses only spread through individual virus particles, but in 2015, a team of investigators led by the National Institute of Health (NIH) found that enteroviruses such as poliovirus can travel collectively in clusters and invade cells.

In a new study published in Cell Host & Microbe, a team of investigators found that a similar mechanism can exacerbate the spread and severity of stomach illnesses; transmission of norovirus and rotavirus can occur through membrane-cloaked virus clusters.

Rotavirus and noroviruses can be transmitted in clusters inside vesicles in stool. The vesicles can be transmitted through the fecal-oral route and have the ability to remain intact as they pass through the gastrointestinal tract. This transmission was found to result in higher levels of infection and more clinical signs. This discovery, according to the investigators, “marks a turning point” in current understanding of how these viruses spread and why they are so infectious which can lead to the development of more effective antivirals.

For their study, investigators obtained fecal samples from humans and animals (pigs and mice) and found that the viruses are shed in the stool as viral clusters inside membrane-bound packets. Furthermore, the clusters were determined to be more infectious than individual viruses in the sample.

Investigators also determined that the increased level of multiplicity of infection (MOI) was likely attributed to vesicles delivering multiple undiluted viruses to the cell at once. The clusters protect the virus from being destroyed by prolonged exposure to enzymes and possibly by making the virus invisible to the antibodies that are in the stool or gut of the host.

“This is a really exciting finding in the field of virology because it reveals a mode of virus spread that has not been observed among humans and animals,” said study leader Nihal Altan-Bonnet, PhD, senior investigator and head of the Laboratory of Host-Pathogen Dynamics at the NHLBI in a recent statement. “We hope that it will provide new clues to fighting a wide range of diseases involving many types of viruses, including those that cause gastrointestinal illnesses, heart inflammation, certain respiratory illnesses, and even the common cold.”

Some remaining areas of interest include determining how the virus escapes the vesicle and how the vesicle latches onto the cell surface. More studies are needed, but the extreme potency of the virus packets has a clear consequence—it not only enhances the virus’ ability to spread more aggressively, it also increases the severity.

The investigators are hopeful that the findings can lead to the development of effective antiviral agents that can target virus clusters instead of individual particles. 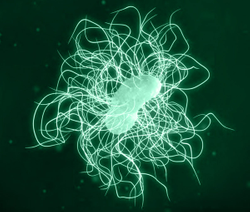 The Role of Antimicrobial Stewardship in the Treatment of C difficile 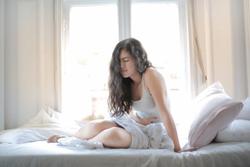 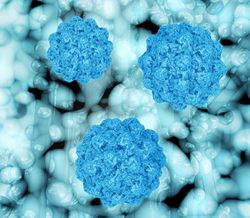