This orphan drug is for patients with limited antiretroviral treatment options.

In March 2018, the US Food and Drug Administration (FDA) approved ibalizumab (Trogarzo) for the treatment of multidrug-resistant HIV-1 infection in heavily treatment-experienced adults failing their current antiretroviral regimen.1 This humanized IgG4 monoclonal antibody is a postattachment inhibitor and represents a new class of antiretroviral therapy. The last time a novel class of medication for HIV treatment was approved by the FDA was over 10 years ago when the first integrase strand transfer inhibitor, raltegravir (Isentress), was introduced in October 2007.

Ibalizumab does not inhibit binding of HIV glycoprotein (gp) 120 to CD4 receptors. However, it binds to extracel&shy;lular domain 2 of the CD4 receptors to prevent postattach&shy;ment conformational changes in the CD4-HIV envelope gp-120 complex and block viral entry into the host CD4 cell.2 Ibalizumab does not interfere with the binding site of major histocompatibility complex class II molecules, suggesting that it does not affect CD4-dependent immu&shy;nity.2 It is active against both CCR5 and CXCR4 tropic strains. Reduced susceptibility is possible and associated with mutations affecting a gp-120 glycosylation site.2

Ibalizumab is administered as an intravenous infusion. It should be diluted in normal saline only and administered immediately. It is stable for 4 hours at room temperature or up to 24 hours when refrigerated. An initial loading dose of 2000 mg is administered over 30 minutes, with a postinfusion observation period of 1 hour. If no infusion-related reactions occur, patients then receive infusions every 2 weeks at a maintenance dose of 800 mg administered over 15 minutes, with a postinfusion observation period of 15 minutes. If a maintenance dose is missed by 3 or more days, a loading dose should be repeated as soon as possible, with maintenance dosing resuming every 2 weeks thereafter. Importantly, ibalizumab should be administered with an optimized background regimen that includes at least 1 antiretroviral to which the patient’s virus is fully susceptible.

Ibalizumab has no reported drug—drug interactions. The most common adverse effects are diarrhea, dizzi&shy;ness, nausea, and rash.2 Immune reconstitution inflamma&shy;tory syndrome has been reported. The annual whole sale acquisition cost of ibalizumab is $118,000, which does not include infusion services.3 A patient support program is available to help navigate insurance and coordinate care with in-network infusion centers. Patients without insurance are eligible for financial assistance. Those with commercial insurance but high copayments may be eligible for copay assistance.

Ibalizumab was given fast track, priority review, break&shy;through therapy, and orphan drug designations by the FDA.1 Approval was granted based on a clinical trial with a streamlined design tailored to the relevant patient popula&shy;tion: patients with multidrug-resistant HIV-1 infection lacking treatment options to suppress HIV-1 plasma RNA to undetect&shy;able levels. Key aspects included assessment of virologic response after 7 days of ibalizumab therapy and safety assessment at 24 weeks, instead of at week 48 for each parameter, which is standard in trials conducted in treat&shy;ment-naïve patients with HIV.4

TMB-301 was a phase 3, 24-week, open label, single-arm study in which ibalizumab was administered to adults with multidrug-resistant HIV-1 infection. Among the inclusion criteria, partici&shy;pants had to have failed multiple prior antiretroviral regimens, have an HIV-1 viral load more than 1000 copies/mL while on antiretroviral therapy for 8 weeks or more before screening, and have docu&shy;mented genotypic or phenotypic resistance to at least 1 drug in at least 3 antiretroviral classes.5 The study design consisted of a 7-day control period during which patients continued their failing regimen. The participants then received a loading dose of ibalizumab and then continued their failing regimen.

Virologic response was assessed after 7 days; this was the functional monotherapy period. After this point, an optimized background regimen including at least 1 fully active antiretroviral was initiated, and the patients began mainte&shy;nance dosing of ibalizumab. The primary endpoint was the proportion of patients with at least 0.5 log10 decline in HIV-1 plasma RNA levels after 1 week of ibalizumab func&shy;tional monotherapy. A 0.5 log10 decline in viral load is asso&shy;ciated with reduced clinical disease progression.4

Among the 40 study participants, the median age was 53 years, 85% were male, 55% were white, and 33% were black. The median number of years since HIV diagnosis was 23. The average baseline HIV-1 viral load was 4.5 log10 copies/mL, and the average CD4 count was 150 cells per microliter. A total of 48% of participants had documented resistance to all integrase inhibitors, 53% had exhausted 3 or more classes, 35% had exhausted 4 or more classes, and 15% had exhausted all classes of FDA-approved antiretrovirals.6 In order to fulfill criteria of having at least 1 fully active antiretroviral as part of their optimized background regimen, 43% of patients were treated with fostemsavir, another novel antiretroviral currently in development, which was accessed in partici&shy;pants through co-enrollment in another clinical trial.

In the intention-to-treat population, 83% had at least 0.5 log10 decline in HIV plasma RNA levels after 7 days of ibalizumab functional monotherapy (P<.001 compared with the control period).5 At week 25, 43% had HIV-1 viral load less than 50 copies/mL and 50% had HIV-1 viral load less than 200 copies/mL. The median reduction in HIV-1 viral load was 1.8 log10 copies/mL. The average increase in CD4 count was 62 cells per microliter. Ten patients experi&shy;enced virologic failure or rebound, 9 of whom had reduced susceptibility to ibalizumab compared with baseline. The most common adverse effects were diarrhea, nausea, fatigue, pyrexia, rash, and dizziness. There were no reported infusion-site reactions. One patient developed immune reconstitution inflammatory syndrome associated with progressive multifocal leukoencephalopathy. Four patients died during the course of the study due to causes considered unrelated to the study drug (eg, Kaposi’s sarcoma, hepatic failure, lymphoma, and end-stage AIDS).5

Additional data on ibalizumab safety and efficacy at week 48 (expanded access protocol; TMB-311) was presented at IDWeek 2017.7 Postmarketing surveillance will be important for gathering additional information on the safety and effectiveness of ibalizumab.8

In clinical settings, a few practical points should be considered when initiating ibali&shy;zumab treatment. Patients should understand that adherence to their background regimen of other, usually oral antiretrovirals is still important, and reduced susceptibility to ibalizumab is possible. The potential impact of the treatment schedule on the patient’s work or travel plans, among other incon&shy;veniences, should be discussed in advance. Ibalizumab treatment requires a significant commitment and may be lifelong, at least until new antiretrovirals become available that have activity against multidrug-resistant HIV-1 strains and can be admin&shy;istered more easily.

Pharmacies and infusion centers should be aware that this agent will need to be obtained through a specialty pharmacy. They should also be cognizant of the short stability of the drug after dilution. One approach may be to complete a brief assessment, prior to preparing the drug order, of the patient over the phone and have the patient confirm that he/she is en route. This not only facilitates drug preparation, but it may also help to reduce patient wait times.9,10 Reminder calls may also be useful to ensure that patients remember appointments and avoid missed doses. A coordinated, multidisciplinary approach is advisable to ensure successful treatment.

In summary, ibalizumab is a novel antiretroviral agent that inhibits viral entry into the host CD4 cell and an important addition to the armamentarium against multidrug-resistant HIV-1 infection.

Dr. Kuriakose is an HIV clinical pharmacist for the Clinical Research Directorate/ Clinical Monitoring Research Program at the Frederick National Laboratory for Cancer Research sponsored by the National Cancer Institute (NCI) and funded by NCI Contract No. HHSN261200800001E. She practices at the National Institutes of Health Clinical Center where she provides support to the National Institute of Allergy and Infectious Diseases and was an associate investigator on the TMB-311 study. 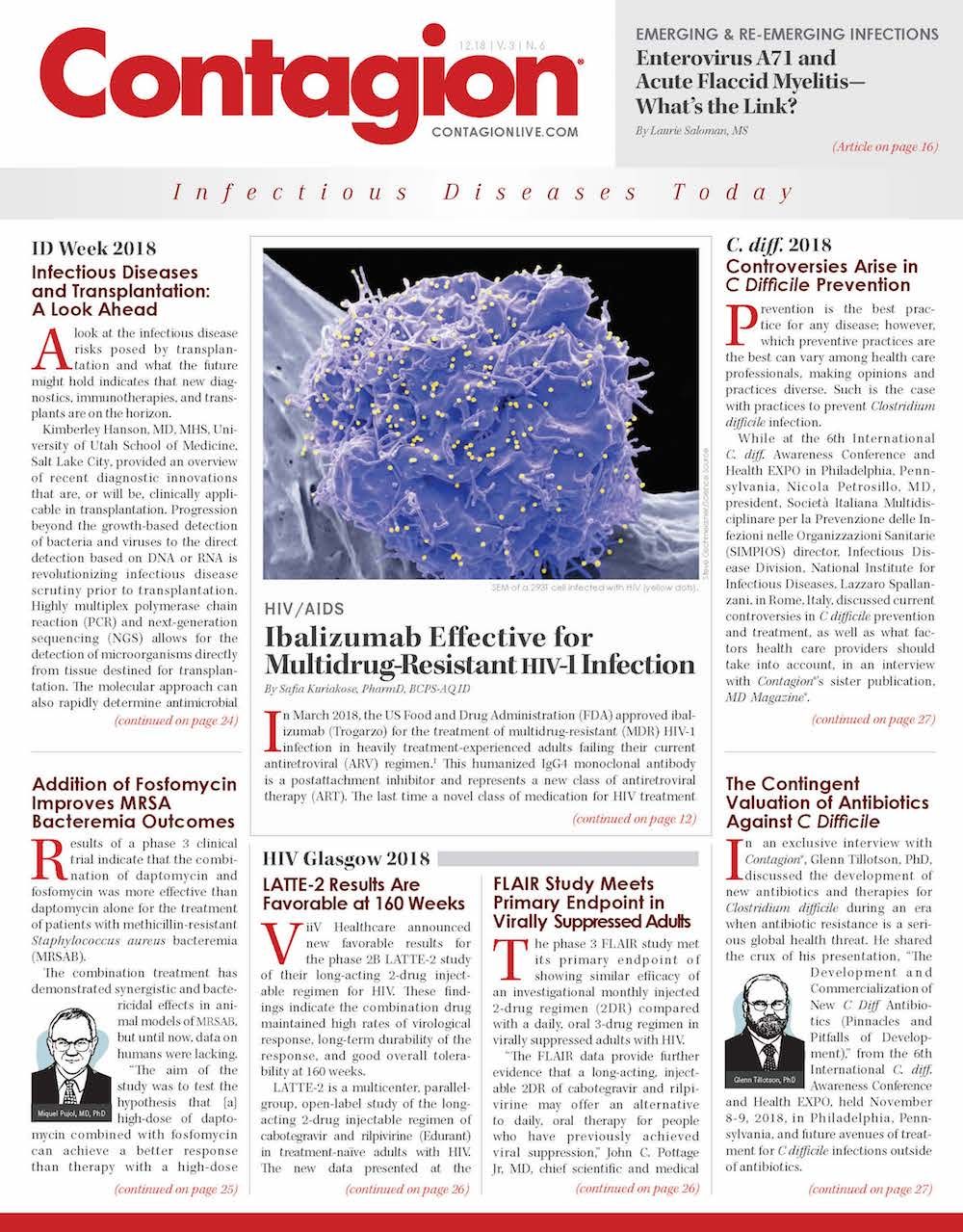 Lessons From a Year Full of Infectious Disease Firsts
Ibalizumab Effective for Multidrug-Resistant HIV-1 Infection
Cryptosporidium: A Potentially Fatal Cause of Diarrhea in a Heart Transplant Recipient
A Look Into the Antimicrobial Stewardship Collaborative of South Carolina
Controversies in C Difficile Prevention
The Impact of Social Media on Antimicrobial Stewardship Programs: Background on the Management of Drug-Resistant Bacterial Infections
The Multi-Drug Resistant Organism Network
Enterovirus A71 and Acute Flaccid Myelitis&mdash;What's the Link?
Exploring Primary Prophylaxis for Invasive Pulmonary Aspergillosis
Eravacycline: The IGNITE Growth of the Tetracyclines
Related Videos
Related Content