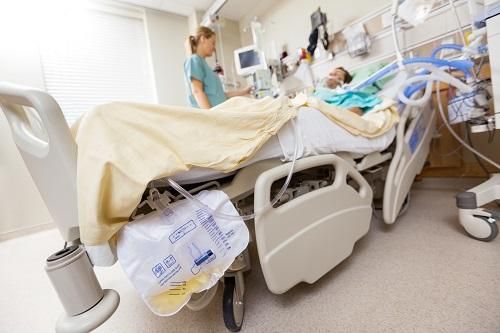 Selecting an initial antibiotic for ventilator-associated pneumonia (VAP) from Gram staining and the care unit's resistance records could reduce empiric, guideline-driven broad-spectrum antibiotics, according to a study conducted in the intensive care units (ICUs) of 12 hospitals in Japan.

"Gram staining should provide immediate information for detecting causative pathogens. However, the effect of Gram staining on restricting the initial antibiotic choice has not been investigated in intensive care units," Yoshimura and colleagues indicated.

The investigators randomized 206 adult participants from ICUs of 12 tertiary referral hospitals in Japan with diagnosed VAP who had undergone mechanical ventilation for at least 48 hours, to initial guideline-based antibiotic (n=103) or antibiotic treatment based on Gram staining of endotracheal aspirate (n=103). Selection based on Gram staining also took into account the patterns of antimicrobial resistance in each ICU. In both groups, initial treatment selection was escalated to cover all pathogens isolated from respiratory samples taken before the onset of VAP.

The combination of antipseudomonal and anti-MRSA agents were employed when staining showed both GPC and GNR. The investigators did employ the broadest spectrum agents in each microbial category when Gram staining showed 2 or more categories, and a combination of an antipseudomonal and anti-MRSA agent when there were no Gram stain results.

In addition, compared to the guideline-based group, the Gram stain based approach reduced use of antipseudomonal agents (30.1%, 21.5-39.9%) and of anti-MRSA agents (38.8%, 29.4-48.9%). There were no significant differences between groups in ICU-free days, ventilator-free days, or adverse events.

The investigators note that previous antibiotic therapy can affect the Gram staining results; and that Gram staining may not be suitable in the most critically ill patients or in units with high frequency of antimicrobial drug resistant GNR. Absent the availability of point-of-care molecular testing, however, the investigators advocate for increased use of the "time-honored" Gram staining approach.

"We believe that the trial results are acceptable and have the potential to change the strategy of antibiotic choice worldwide," Yoshimura and colleagues wrote.