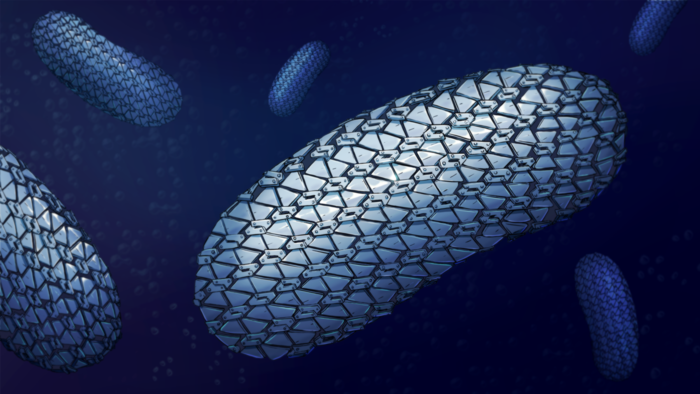 This image is credited to Dr. Lizah van der Aart of Newcastle University.

The superbug Clostridium difficile (C diff) is the leading cause of hospital-acquired, antibiotic-associated disease in the US and around the world.

C diff is notorious not only for its remarkable burden on the healthcare system, but also for its resilience. Now for the first time ever, investigators have proven this to be largely due to the chain mail-like, flexible yet resilient outer layer of the bacteria.

A team of scientists from Newcastle, Sheffield, and Glasgow Universities partnered with Imperial College and Diamond Light Source to outline the external structure of C diff.

The investigators used x-rays and electron crystallography to determine the protein structure. They found that the links of the chain mail primarily consist of the protein SlpA, which is arranged in a pattern to create the flexible armor.

Most bacteria and archaea are covered by a proteinaceous coat, called the surface or “S-layer.” While the S-layers of other pathogens have pores of approximately 30-100 Å in diameter, C diff’s array was approximately 10 Å.

Before this research, a complete, intact, atomic-level rendering of the assembly and anchoring domains had not been created for any major S-layer protein.

The investigators found SlpA is post-traditionally cleaved into 2 S-layer proteins, one of high molecular weight and one of low molecular weight, and these subunits unite to form the S-layer complex. Unlike other known S-layer structures, C diff’s anchoring domain, which ties the S-layer to the cell wall, and assembly domain, which forms the 2D paracrystalline array, are the same.

Study author Dr. Paula Salgado, a senior lecturer in Macromolecular Crystallography at Newcastle University, expounded on these results. “Surprisingly, we found that the protein forming the outer layer, SlpA, packs very tightly, with very narrow openings that allow very few molecules to enter the cells. S-layer from other bacteria studied so far tend to have wider gaps, allowing bigger molecules to penetrate. This may explain the success of C diff at defending itself against the antibiotics and immune system molecules sent to attack it.”

Treating C difficile can be difficult, as recurrent infections can be common and deadly, but antibiotics can make the problem worse. Antimicrobial resistance (AMR) allows C diff to evade antibiotics, and administering antibiotics can wipe out all the healthy bacteria in the gut and enable the C diff to flourish.

Determining the structure of C diff will enable researchers to create specific drugs capable of creating holes in the S-layer to enter and kill the bacterium cell.