Researchers identify a molecule found on human cells and some animal cells that could be a potential target for drugs against chikungunya virus and related diseases.

A team of scientists at Washington University School of Medicine in St. Louis has detected a molecule found on human cells as well as some animal cells that could serve as a potential drug target against chikungunya virus and other related diseases.

Chikungunya is a viral disease that is transmitted to humans via infected mosquitoes and is known to share clinical signs with dengue and Zika virus, and, as such, is often misdiagnosed in areas where those mosquito-borne diseases are common.

"There is NO specific treatment or vaccine approved for chikungunya virus," Michael Diamond, MD, PhD, the Herbert S. Gasser Professor in the departments of Medicine, Molecular Microbiology, Pathology, and Immunology, and associate director of the Andrew M. and Jane M. Bursky Center for Human Immunology and Immunotherapy Programs, at the Washington University School of Medicine, told Contagion®. "Thus, research is needed to identify new targets for drug development."

With the number of vector-borne diseases such as chikungunya having tripled in the United States from 2004 to 2016, with upwards of 640,000 cases reported, and several outbreaks springing up in Africa, Asia, and Europe, the need for a specific treatment for the virus is clear.

In an effort to do that, WUSTL scientists launched a study which sought to determine which traits make human susceptible to the virus; the research was funded in part by the National Institutes of Health’s National Institute of Allergy and Infectious Diseases (NIAID).

For the study, the scientists used a gene-editing tool called CRISPR-Cas9—which stands for clustered regularly interspaced short palindromic repeats and CRISPR-associated protein 9—to perform a genome-wide screen. The CRISPR-Cas9 tool has produced a lot of excitement in the scientific community, according to the NIH’s US National Library of Medicine, as the system is currently faster, cheaper and more effective and accurate than other genome editing methods currently available.

Their genome-wide screen helped them identify a molecule referred to as Mxra8 to be a key to the entry of viruses such as chikungunya into host cells. In fact, by editing the human and mouse genes that encode Mxra8, the scientists were able to inhibit the virus’ ability to infect cells.

"We have identified a new entry receptor for chikungunya virus that also appears to be used by related viruses (such as Mayaro, O’nyong-nyong, and Ross River viruses)," Dr. Diamond said. "A receptor is a key part of how a virus causes infection; it must enter cells to replicate. Mxra8 appears to be a key protein required by several alphaviruses for cell entry. In the future, it may be possible to target this gene or the virus interaction with this gene with small molecules to prevent or treat multiple alphavirus infections."

The scientists took the work a step further by administering anti-Mxra8 antibodies to mice and infecting the mice with either chikungunya virus or O’nyong-nyong virus. After doing this, they found that the mice who had been given the antibodies had significantly lower levels of virus infection and related foot swelling compared with the control group.

The researchers posit that these findings, along with more research dedicated to understanding how chikungunya interacts with Mxra8, could help inform drug development for diseases caused by alphaviruses. As for what this future research might look like, Dr. Diamond explained, "We are focusing on several things, such as high-resolution atomic structures of alphaviruses bound to Mxra8. This will allow us to potentially design and test inhibitors. He added, "We are trying to figure out exactly how Mxra8 impacts cell tropism in vivo—which cells express Mxra8 and are targeted by chikungunya and other alphaviruses." 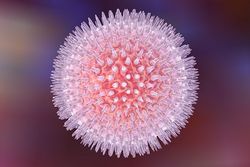 Looking Beyond C difficile: The Potential of the Gut Microbiome