Texas Could Be Site of Next Large Measles Outbreak, Study Predicts

Texas could be the site of the next large measles outbreak in the United States, according to a new study that highlights the low vaccination rates among schools there.

Texas could be the site of the next large measles outbreak in the United States, according to a new study that highlights the low vaccination rates among schools there.

Limiting vaccine exemptions, though, could decrease this risk, the study published in JAMA reports. Vaccine exemptions, which allow unvaccinated children to attend school, have increased by a factor of 28 since 2003 in Texas.

Measles, which can result in severe outcomes, such as pneumonia, brain damage, and death, can be avoided with vaccination. The US Centers for Disease Control and Prevention (CDC) recommends that children receive their first measles vaccination between ages 12 months and 15 months, and a second dose between ages 4 years and 6 years (before entering school).

Two doses of the vaccine is about 97% effective, while a single dose is about 93% effective. It is extremely contagious: if 1 person has the virus, the CDC says up to 90% of people around him or her will also become infected if they are not vaccinated.

Texas, the second largest US state by population, encompasses 24 metropolitan statistical areas (MSAs). MSAs are defined as a geographic area containing at least 1 urban area of at least 50,000 people and the surrounding counties from which people commute to those urban areas. Texas MSAs can be considered representative of many US population centers, based on population size.

The study found that 1 in 20 measles introductions was forecasted to be associated with outbreaks of more than 400 cases in the Austin and Dallas metropolitan areas, according to 1000 simulated outbreaks in each metropolitan area. Furthermore, 64% of cases were forecasted to occur in children for whom a vaccine has been refused and 36% in others. Approximately 0.2% of students in Texas are ineligible for the vaccination because of contraindications.

The study found that a 5% decrease in vaccination rate was associated with a 40% to 4000% increase in potential outbreak size, depending on the MSA.

Although it varies by local demographic conditions, approximately 92% to 96% of a homogeneously mixed population requires immunity in order to maintain herd immunity.

As vaccination rates have decreased in Texas, however, the study found that large measles outbreaks of more than 400 cases could occur in the MSAs Austin-Round Rock and Dallas-Fort Worth-Arlington, based on their 2018 distribution of vaccination rates. In those areas, there are 35 and 13 schools, respectively, with vaccination rates less than 92%—the lower band of the estimated herd immunity threshold.

The study found that among the susceptible population (those who are unvaccinated), 30% of all transmissions occur in households, 33% occur in the neighborhood, and 37% occur in schools or workplaces

This decrease in vaccinations not only affects those who have not received the vaccine, but could also affect bystanders in the population as the herd immunity is weakened.

Outbreaks have increased across the United States in the past decade, although the potential for outbreaks in Austin and Dallas is higher when compared with other areas in the country. In 2019, there have been 1215 individual cases of measles reported across 30 states. Outbreaks remain ongoing in Rockland County, New York; New York City; Washington state; LA County, California; El Paso, Texas; and Wyoming County, New York, according to CDC data. 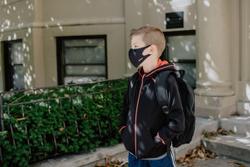