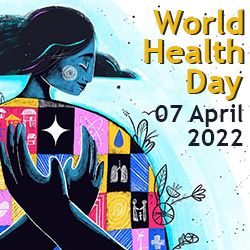 Today marks World Health Day, which is a global health awareness day celebrated every year on April 7 under the sponsorship of the World Health Organization, as well as other related organizations. WHO, which has been a leading health advocate for developing countries, was founded on this day, April 7, 1948. WHO is celebrating its 74th anniversary. The WHO Constitution states its main objective as "the attainment by all peoples of the highest possible level of health."

In marking this year’s day, WHO has decided to highlight climate change with its our planet, our health theme.

“The climate crisis is a health crisis: the same unsustainable choices that are killing our planet are killing people,” WHO Director-General Tedros Adhanom Ghebreyesus, PhD, said in a statement.

On its website, WHO said this about climate change: “WHO estimates that more than 13 million deaths around the world each year are due to avoidable environmental causes. This includes the climate crisis which is the single biggest health threat facing humanity. The climate crisis is also a health crisis. Our political, social and commercial decisions are driving the climate and health crisis. Over 90% of people breathe unhealthy air resulting from burning of fossil fuels…Extreme weather events, land degradation and water scarcity are displacing people and affecting their health. Pollution and plastics are found at the bottom of our deepest oceans, the highest mountains, and have made their way into our food chain. Systems that produce highly processed, unhealthy foods and beverages are driving a wave of obesity, increasing cancer and heart disease while generating a third of global greenhouse gas emissions.”

This year, WHO is introducing a database which measures ground measurements of annual mean concentrations of nitrogen dioxide (NO2), This pollutant is a precursor of particulate matter and ozone. It also includes measurements of particulate matter with diameters equal or smaller than 10 μm (PM10) or 2.5 μm (PM2.5). Both groups of pollutants originate mainly from human activities related to fossil fuel combustion.

This air quality database is recording 2000 more cities/human settlements for particulate matter, PM10 and/or PM2.5, than the last update. This marks an almost 6-fold rise in reporting since the database was launched in 2011.

Particulate matter, especially PM2.5, is capable of penetrating deep into the lungs and entering the bloodstream, causing cardiovascular, cerebrovascular (stroke) and respiratory impacts, the WHO explains. There is emerging evidence that particulate matter impacts other organs and causes other diseases as well.

NO2 is associated with respiratory diseases, particularly asthma, leading to respiratory symptoms (such as coughing, wheezing or difficulty breathing), hospital admissions and visits to emergency rooms

WHO last year revised its Air Quality Guidelines, making them more stringent in an effort to help countries better evaluate the healthiness of their own air.

“Current energy concerns highlight the importance of speeding up the transition to cleaner, healthier energy systems,” Adhanom Ghebreyesus said in a statement. “High fossil fuel prices, energy security, and the urgency of addressing the twin health challenges of air pollution and climate change, underscore the pressing need to move faster towards a world that is much less dependent on fossil fuels.”

The time has come to stop thinking about climate change and health in different silos. Climate change and infectious disease, for example, are interconnected. The gases being emitted today can lead to warmer temperatures throughout the world that can affect climates creating new areas where mosquitos can live and transmit malaria. “A heating world is seeing mosquitos spread diseases farther and faster than ever before,” the WHO stated on its site.

The days of thinking it is an “over there” problem should be over. COVID-19 hopefully taught a very important lesson in taking note and the seriousness of how diseases, viruses, and infections can spread.

On its founding day, the organization is seeking a re-imagining and re-prioritization of resources to usher in sustainable, well-being societies. With World Health Day, WHO is trying to raise awareness to create actions that protect the planet and human health.

“We need transformative solutions to wean the world off its addiction to fossil fuels, to reimagine economies and societies focused on well-being, and to safeguard the health of the planet on which human health depends,” Adhanom Ghebreyesus stated.

For information on what WHO is doing specifically to address air quality, check out this website.