Another Tick-Borne Disease Growing in the United States: Powassan Virus

Up to 90% of some mammal populations in the Northeast are infected with the virus.

What is Powassan virus?

Powassan virus is a tick-borne flavivirus that was first discovered in Ontario in 1956. Powassan virus is known to be carried by the Ixodes scapularis, or the black-leg tick, which is also known as the deer tick. That’s the same vector that carries Lyme disease, Anaplasma, and Babesia.

It’s a relatively newly discovered virus, and so we don’t know exactly how prevalent it is in humans in the United States, but we do know that about 7% of ticks in endemic areas for Lyme disease also carry Powassan virus, and that in some mammal populations in the Northeast, up to 90% of the population can have Powassan virus.

What is the Prevalence of Powassan virus in Humans in the United States?

We also looked at patients who were presenting just for routine chemistry screening, and we found that about 4% of those patients had serologic evidence of a past Powassan virus infection. We know that the prevalence in humans is likely to be higher than what we had previously estimated, because the [virus’s] prevalence in ticks is growing; so, about 7% of Ixodes scapularis ticks in some endemic regions now carry Powassan virus, and up to 90% of mammals in some endemic regions of New England have serologic evidence of Powassan virus.

Why Should Healthcare Providers Be Aware of Powassan virus?

Powassan virus can cause severe neurologic symptoms, including encephalitis in some patients. The majority of the patients likely present with an asymptomatic infection, or just a mild febrile illness. We don’t really know which patients are likely to develop encephalitis or neuro-invasive diseases, and so, if you live in an area that’s endemic for Lyme disease, it’s important to consider [Powassan virus] if you have a patient who is critically ill.

Can You Explain the Differential Diagnosis for Powassan virus?

For all patients who live in areas where the Ixodes scapularis tick is present, it’s important to consider things like Lyme, Anaplasma, Babesia, Ehrlichia, as well as some of the other Borrelia species.

In a patient who is presenting with neurologic symptoms or encephalitis, that differential diagnosis can be a lot broader. So, that can include things like West Nile virus, which is commonly found in areas that are endemic for Powassan [virus] and for Lyme disease.

What Can You Tell Us About the Treatment Options Available for Powassan virus?

Currently, the treatment [for Powassan virus] is largely supportive. Very little is known about the virus because we don’t have a lot of data in humans, so there’s no specific treatment that we can recommend.

In general, for supportive care, we recommend fluids, if needed, [and] providing basic care for encephalitis, [which] can include ICU care, neuro-rehabilitation after the infection. We recommend treating this like you would any other patient with encephalitis, or possibly as you would a patient who has West Nile encephalitis, because we don’t know what the best course of treatment is.

Should There Be Routine Testing for Powassan virus?

At this point we wouldn’t recommend testing patients routinely for Powassan virus because we don’t know what clinical benefit that would have or how it would alter treatment. If you do have a patient [who’s] critically ill or a patient [who] has encephalitis and you live in an area endemic for Lyme, those patients should be tested for Powassan virus.

Is the Prevalence of Powassan Virus Increasing in Humans?

Powassan [virus] is an emerging infection, and so, we know that the amount of Powassan that we’re been seeing in ticks has been increasing, and the seroprevalence in mammals has been increasing. [As a result], it’s likely that we’re going to see more of this as time progresses. I think we need to do further studies looking at what the true clinical presentation of Powassan virus is. We know very little aside from patients who have neurologic disease, because that’s the population we’ve really tested before. We also need to learn more about how patients [who] have coinfection with other tick-borne diseases, such as patients [who] have both Lyme disease and Powassan at the same time present, and if they have a higher severity of illness, or if their illness lasts for a longer period of time. 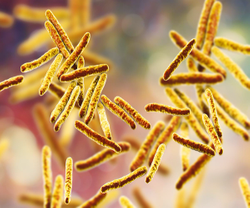 Mycobacterium abscessus in a Patient With Recent COVID-19 Pneumonia

Lessons Learned from the COVID-19 Coalition