As Cholera Outbreak in Yemen Spreads at An Alarming Rate, Officials Race to Respond

Yemen has been hit by a resurgent cholera outbreak and health officials are focusing all of their efforts into infection control.

Yemen, the second largest country in the Arabian Peninsula, seems to be getting hit from all directions. Ongoing conflict has resulted in the death of countless individuals and has obliterated much of the country’s infrastructure; their health system, which had already been weak in the first place, is collapsing. On top of everything else, a resurgence of cholera is spreading at “unprecedented” speed, taking health officials by surprise.

Just yesterday, about 3,000 suspected cholera cases had been reported in Yemen. In addition, over the course of just 25 days, a staggering 32,300 cases and 332 deaths have been recorded, according to a tweet posted today on the World Health Organization (WHO), Yemen office’s official Twitter account.

Around 3000 suspected #cholera cases were reported yesterday in #Yemen. In 25 days, more than 32,300 cases & 332 deaths have been recorded. pic.twitter.com/x89bYDEGEn

A recent press release issued by Doctors Without Borders (MSF) reports that in just 5 days—from May 14, 2017 to May 19, 2017&mdash;suspected cases have “more than doubled” in number.

Furthermore, it appears that the capital city, Sana’a, which was just declared to be in a state of emergency by the Houthi government last week, is being hit especially hard—they are thought to have the highest number of suspected cases, coming in around 6,000.

“The fast spread of the current outbreak is extremely alarming,” said Ghassan Abou Chaar, MSF’s head of mission in Yemen. “Before the outbreak, the health system was already overstretched and people’s health needs were already huge.”

This outbreak is thought to be a resurgence of “an original episode” that had been announced on October 6, 2016 by Yemen’s Ministry of Public Health and Population, and had peaked in December 2016. WHO estimates that around 7.6 million individuals currently live in high-risk areas.

Due to the ongoing conflict ravaging the country, there is only a limited number of functioning healthcare facilities left to provide treatment. In addition, the country’s water and sanitation system has suffered immense damage that has resulted in contaminated water, which is a contributing factor in disease transmission. In fact, the United Nations (UN) reports that a majority of the population, about two-thirds, does not have access to safe, clean drinking water. WHO cites that the weather is also contributing to the issue in that “pathogens that cause cholera are more likely to spread in warmer weather and recent heavy rains have washed piles of uncollected waste into water sources.”

Of the country’s 26 million residents, 17 million do not have access to sufficient food resources, leaving “at least three million malnourished children…in ‘grave peril,’” according to Reuters. All of this, coupled with medicinal as well as staff shortages, has allowed for cholera to spread at an alarming rate throughout the population.

“To bring the outbreak under control, it won’t be enough simply to treat those people who reach medical facilities. We also need to address the source of the disease, by improving water and sanitation and working in communities to prevent new cases,” said Abou Chaar.

When dealing with a disease that can kill within just a matter of a few hours if left untreated, quick response is imperative. To address the medicinal shortages, WHO is working with partners to distribute medicine as well as supplies, which include “cholera kits, oral rehydration solutions, and intravenous fluids.” They are also working in distributing “medical furniture and equipment for diarrhea treatment centers.” In fact, 10 such centers are being established in “affected areas.” In addition to these centers, WHO is working on creating “oral rehydration therapy corners” which will provide treatment for diarrhea-associated dehydration, ranging from mild to moderate in severity; 10 of these corners will be established in Sana’a. 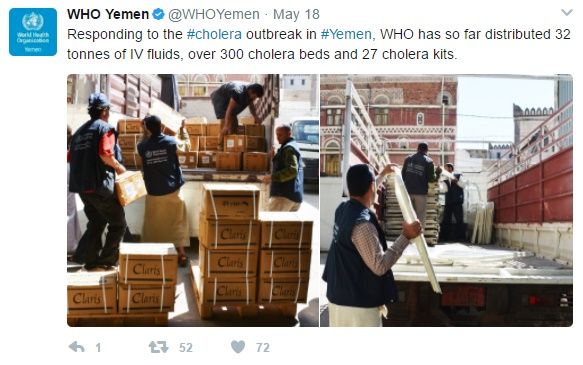 MSF has also been committed to helping control infection—the organization has already treated 3,092 patients in 4 cholera treatment centers as well as 9 treatment units in “the governorates of Amran, Houdaydah, Hajja, Al Dhale, Taiz, and Ibb.”

“We are very concerned with the re-emergence of cholera across several areas of Yemen in the past couple of weeks. Efforts must be scaled-up now to contain the outbreak and avoid a dramatic increase in cases of diarrhoeal disease,” said Dr. Nevio Zagaria, WHO representative in Yemen.