Fear of Ebola Drives Liberian Women Away from Healthcare Facilities

The first household survey was conducted in Liberia to examine the collateral harm to maternal healthcare delivery services in areas impacted by the Ebola epidemic. It showed that since the Ebola epidemic began, facility-based deliveries have declined mostly due to fear of acquiring infection, keeping women away from using the healthcare services available to them.

In March and April 2015, the first community-based household survey was conducted in Rivercess County, Liberia, and it examined the collateral harm to maternal healthcare delivery services in areas impacted by the West African Ebola epidemic. The results showed that since the Ebola epidemic began, there has been a decline in facility-based deliveries (FBD) which might be linked to a fear of acquiring infection in healthcare facilities, keeping women away from using health services available to them.

Previously known as Ebola hemorrhagic fever, Ebola is a rare, deadly disease that is caused by infection with one of the Ebola virus strains, according to the CDC. First discovered in 1976 near what is now the Democratic Republic of the Congo, the viruses can be found in several African countries. Ebola can be spread through direct contact between broken skin or mucous membranes (such as the eyes, mouth, and nose) and contact with blood or bodily fluids from an infected individual as well as contact with objects that have been contaminated by said individuals. The largest outbreak in Ebola history started in March 2014.

Senior study author, John Kraemer, JD, MPH, assistant professor of health systems administration at Georgetown University School of Nursing & Health Studies, stated, “Prior to the Ebola epidemic, Liberia made big gains in the rate of babies being delivered at health facilities, which translates to healthier moms and babies.”

According to Georgetown University Medical Center’s press release, the Ebola epidemic that occurred between 2014 and 2015 accounted for 11,300 deaths in Sierra Leone, Guinea, and Liberia. In addition, at least 500 healthcare workers died from the disease in the three most affected countries, leaving long-term effects on the region’s health system, a system that had already been experiencing a shortage of healthcare workers prior to the epidemic. In addition to these deaths, a number of healthcare facilities were either closed to the public or were temporarily unavailable for non-Ebola services and treatment.

Kraemer partnered up with Last Mile Health, an organization dedicated to providing access to quality health services for those living in remote areas such as Liberia, to conduct the survey study. The central aim of the survey was to measure the effects that the Ebola epidemic had on health and healthcare in areas that were impacted by the disease and to use that data to advance efforts to restore adequate healthcare to those regions. According to the study, the researchers hypothesized that fear of Ebola transmission in healthcare facilities decreased the demand for healthcare services, particularly facility-based delivery.

The researchers composed a cluster-sample survey that included questions regarding the birth history of women in Rivercess County, Liberia, as well as the location for all of their deliveries. Prior to the Ebola epidemic, maternal health had become a national priority in Liberia with FBD rates having increased from 38% to 56% between 2007 and 2013, according to the study, which was published in PLOS Medicine. However, researchers noticed a 30% reduction in facility-based delivery in the current survey, with only 212 births reported during the epidemic compared to the 686 births reported prior to the epidemic. Unlike most areas, the healthcare facilities remained open in the district that they surveyed, which means that their results might actually underestimate the impact of the epidemic on FDBs in other highly impacted areas where the facilities had closed, said Kraemer.

Commenting on Liberian women's fear of transmission, Kraemer noted, “We…know that the stigma associated with Ebola interfered with people seeking healthcare services in addition to the perception that people can contract Ebola if they go to health facilities. It appears these perceptions are a major factor in the decrease of the number of people utilizing health facilities.”

The results of the survey suggest that the West African Ebola epidemic caused collateral harm to healthcare services. Through understanding how the epidemic affected people and how it still influences their perception of health facilities, researchers stress the need for long-term health system reconstruction.

According to the study authors, “These are the first population-based survey data to show collateral disruptions to facility-based delivery caused by the West African EVD epidemic, and they reinforce the need to consider the full spectrum of implications caused by public health emergencies.” 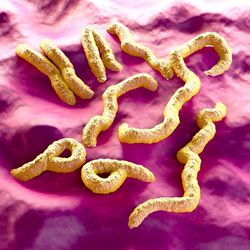