Novel Antibiotic Could Be Game-Changer for CDI

A new type of antibiotic is showing promise in the fight against Clostridioides difficile infection (CDI) by leveraging a novel mechanism of action.

Ibezapolstat, currently under development by the biopharmaceutical company Acurx Pharmaceuticals has shown early promise at not only eliminating CDI, but also potentially stopping recurrence.

The drug works by blocking the enzyme DNA polymerase IIIC (pol IIIC). Pol IIIC is an enzyme required for the replication of aerobic, low guanine-cytosine (G-C) Gram-positive bacteria. Ibezapolstat has been shown to inhibit pol IIC from C difficile, making CDI an attractive therapeutic target for the antibiotic.

So far, ibezapolstat has shown promise in early research. The company in early November released data from its phase 2a study showing the drug wiped out CDI in all 10 patients studied, and also prevented recurrence for the 28-day follow-up period.

Beyond curing the infection, the study suggested patients experienced an increased concentration of secondary bile acids during and after treatment, which the company said is consistent with colonization resistance against C difficile. The resulting increase in the ratio of secondary to primary bile acids could reduce the risk of recurrence better than vancomycin, the company said.

“We are particularly excited by these results in our phase 2a CDI patients, which are consistent with the favorable microbiome profile when compared with vancomycin in our earlier phase 1 healthy volunteer trial,” said Robert J. DeLuccia, MBA, the executive chairman of Acurx, in the press release, “particularly this newest information on the beneficial effect on bile acids.

The potential benefits of a potent new CDI therapy led the Food and Drug Administration (FDA) in 2019 to grant fast-track status to the drug, then known as ACX-362E. The therapy was also granted Qualified Infectious Disease Product status, which means the Acurx is eligible for certain federal incentives, including an expedited review by the FDA and additional market exclusivity if the therapy is approved.

The next segment of the trial, the 2b phase, will add approximately 64 patients with CDI to the study. These patients will be randomized to receive either ibezapolstat or vancomycin for 10 days, with a 28-day follow-up. The 2b will be blinded, with pill appearance, dosing times, and capsule numbers matched to prevent identification. The trial will also look at the pharmacokinetics and microbiome changes in patients in order to find out if changes in microbiome properties might affect recurrence risk.

If the phase 2b trial goes as expected, Acurx has said it will meet with officials from the FDA to determine the size and scope of their phase 3 trial. The company anticipates they will need 2 phase 3 trials in order to gain approval.

In the meantime, the company’s research and the novel mechanism of action are gaining significant attention in the scientific community. Back in August, the company was awarded a $500,000 grant in partnership with a Dutch medical center to study pol IIIC and multidrug resistant organisms.

DeLuccia said the research project could lead to insights beyond C difficile. 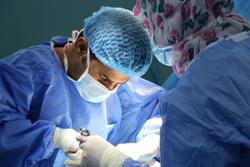