A clinical trial is underway evaluating whether the vaccine candidate ID93 + GLA-SE can induce immune responses to prevent against reinfection and reactivation of TB.

A phase 1 clinical trial is underway to assess a temperature-stable formulation of an experimental tuberculosis (TB) vaccine candidate and investigators have now started vaccinating participants.

The trial, which is being conducted at the Saint Louis University School of Medicine Center for Vaccine Development, is evaluating ID93, a recombinant candidate made up of 4 proteins of Mycobacterium tuberculosis in combination with GLA-SE, an immune-response stimulating protein.

Many vaccines require a temperature-controlled system during transport, something that can be costly and logistically challenging. 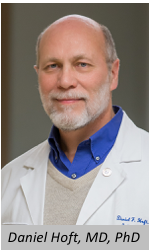 “The importance of a temperature-stable TB vaccine is that it will not require the ‘cold chain’ (refrigeration/freezing until use),” Daniel Hoft, MD, PhD, director of the Division of Infectious Diseases, Allergy and Immunology at the Saint Louis University School of Medicine and primary investigator of the trial, told Contagion®. “Avoiding the need for the ‘cold chain’ will allow the vaccine to be used much more effectively throughout the world, especially in places not yet well-developed where refrigerators/freezers are not available. These vaccines are more stable in general as well, so there will likely be beneficial effects everywhere in optimizing vaccine effectiveness.”

Currently, there is only one US Food and Drug Administration-approved TB vaccine—Bacillus-Calmette-Guerin (BCG). The vaccine is commonly administered to babies in TB-endemic regions to protect against meningitis and disseminated disease in children, but it has been found not to provide adequate TB prevention in adolescents and adults.

ID93 + GLA-SE is being developed as a vaccine candidate for individuals who have already received the BCG vaccine or who have had exposure to TB, with the goal of preventing reactivation or reinfection.

For this trial, the investigators will examine whether a powder formulation combining ID93 and the GLA-SE in a single vial, reconstituted with sterile water, is as effective at inducing an immune response as a 2-vial combination of powdered ID93 and liquid GLA-SE, which has been tested previously.

“This vaccine is unique in being a subunit vaccine including multiple different antigens that are thought to be expressed in different stages of TB infection in humans (differential expressions during initial infection, actively replicating organisms in vivo during disease and latent organisms),” Dr. Hoft explained further. “Targeting these antigens expressed at different stage of TB infection should lead to better overall control of organism and reductions in initial infection, successful persistence of latent organisms and transmission.”

Participants will be asked to provide blood samples at specified time points over a 7-month period, which the investigators will examine to determine immune responses. Additionally, participants will be monitored for any possible reactions to the vaccine.

A safety monitoring committee composed of an independent group of experts will review safety data continuously throughout the trial, which is expected to end in November 2020.

The 2-vial presentation of powdered ID93 and liquid GLA-SE was found to be safe and immunogenic in a phase 2a clinical trial in adults who had recently been cured of TB with standard therapy in South Africa. Additionally, it is reported that other early-stage trials showed ID93+ GLA-SE is safe and immunogenic in healthy adults in the United States and in BCG-vaccinated adults in South Africa.