The polio vaccine (mOPV2) has arrived in Deir Ez-Zor governate, as health officials are working on the implementation of immunization campaigns to stop transmission.

It’s been a little more than a month since the World Health Organization (WHO) first confirmed a circulating vaccine-derived poliovirus type 2 (cVDPV2) outbreak in war-torn Syria. Since then, health officials have been vigorously working towards the implementation of vaccine campaigns in affected areas to stop transmission.

The latest Situation Report from WHO and the United Nations Children’s Fund (UNICEF) confirms that as of July 18, 2017, the case count has reached 27—with 26 cases in the Mayadeen district, Deir Ez-Zor governate, and 1 case from the Tell Abyad district, Raqqa governate. The organizations also note that the number of cases is up by 4 since the previous report, which had been released about a week earlier.

Polio is a disease that is characterized by paralysis.The fight to end polio is a long-running goal on a global scale, but the evasive disease remains a challenge, especially in countries such as Syria, a region that has been ravaged by war. Polio is highly transmissible from individual-to-individual through the fecal-oral route, and the disease thrives in areas with poor sanitation and contaminated water. According to the Centers for Disease Control and Prevention (CDC), “the primary means of detecting polio virus transmission is surveillance for acute flaccid paralysis,” which is then supplemented by environmental surveillance, which takes water and sewage samples to detect polio. The disease has a tendency “to break out in war zones because poor vaccine coverage leaves gaps in the immunity of the local population, leaving children susceptible,” Reuters reports.

Since there is no cure for the disease, the CDC stresses that vaccination is the strongest way to protect individuals and prevent further spread of infection. To this end, officials have planned 2 rounds immunizations directed at children under 5 in in Deir Ez-Zor and Raqqa. (They note that the southern part of Shadadi district, Hasakah governate, will also be included in these rounds.) The first round will be in July and the second will be in August. 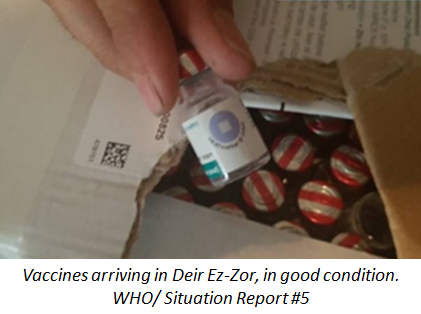 The monovalent type-2 oral polio vaccine (mOPV2) that was shipped to the Deir Ez-Zor governate on July 11, 2017, reached the governate on the following day in "good condition," which means that officials now have the means to launch their vaccine campaign as planned.

The vaccines for Raqqa are “scheduled to transport this week, by air to Qamishli, then by road to Tell Abyad and Tabqa (Thawra).”

For the first immunization round in Deir Ez-Zor, 355 vaccination teams along with 61 supervisors will be going house-to-house in affected villages, fixed posts, as well as other areas, to administer the mOPV2 vaccine. They will aim to vaccinated an estimated 328,000 children: 196,000 resident children, 110,000 refugee and internally displaced children (IDP) children within Deir Ez-Zor, and 22,000 children in Shadadi.

After the mOPV2 vaccine arrives in Raqqa governate, officials hope to vaccinate 120,000 children: 109,500 resident children as well as 10,500 IDP children. There will be 100 vaccination teams led by 21 supervisors set to implement the campaign. In addition to these teams, there are also 2 vaccine distribution centers, also with “adequate cold chain,” located in Tell Abyad hospital and Tabqa health center, report authors write. 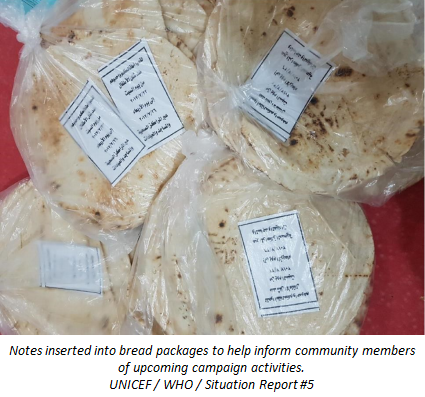 According to the report, the United Nations Office for the Coordination of Humanitarian Affairs (OCHA) “is in communication with all parties in Deir Ez-Zor and Raqqa regarding ceasefire days during campaign implementation.”

“Generally what tends to happen in such circumstances is that any and all parties are engaged in one form or another,” Oliver Rosenbauer, WHO spokesman said in the news release. “This may be through formal negotiations via a government of directly with one of the UN partners such as WHO or UNICEF, or through third parties, health providers, NGOs, networks, local communities, etc., who are already on the ground, and who can help secure a safer environment for the operations.”

WHO has also orchestrated several social mobilization activities dedicated to raising awareness of the vaccination campaign. For Deir Ez-Zor, they report that “250 mobilizers,” the majority of which were university students, have been distributing campaign posters “at markets, village entrances, and main roads.” Furthermore, “campaign date announcements have been made” at 10 bakeries—6 in Boukamal and 4 in Mayadeen. In fact, the mobilizers went so far as to put notes inside bread packages to inform community members of campaign activities. Other efforts include “door-to-door sensitization visits and community meetings,” as well as “radio public service announcements on campaign dates.” A radio Q&A regarding the vaccine is also in the works.

For Raqqa, social mobilization activities have been planned to start 1 week before the immunization round. Report authors note that print materials regarding the campaign have already been delivered to Hasakah; campaign-related t-shirts for those administering the vaccine are being made; and 25 megaphones will be sent to Raqqa to be used in the second round of immunization. They are also working on a radio public service announcement regarding the campaign.

With these efforts, health officials are making their way towards their end goal: quelling the outbreak and preventing infection in several children.