US Immunity Not High Enough to Contain COVID-19

Only about 60% of Americans have immunity, a number too low to protect the country through “herd immunity,” according to a new report.

Though a vaccine against the SARS-CoV-2 virus has been widely available for months and millions of Americans have natural immunity, a new report suggests that overall population-level immunity in the United States may still be too low to contain the virus.

The new report, published in the Annals of Internal Medicine, is based on publicly reported statistics and epidemiological simulation modeling. It warns that, at least as of this summer, the US was in no position to let its guard down.

Corresponding author Alison P. Galvani, PhD, of the Yale School of Public Health, and colleagues, noted that as of the end of July, the country had reported 34 million cases of COVID-19, and about 6 in 10 adult Americans had been fully vaccinated.1 At the same time, they noted the Delta variant of SARS-CoV-2 was spreading rapidly, and many Americans were ignoring public health recommendations like masking and social distancing.

“The lack of adherence to nonpharmaceutical interventions before attainment of sufficient population immunity carries a significant risk for another wave of COVID-19 cases and deaths,” they wrote.

Yet, Galvani and colleagues also suggested that the official count of people who were immune due to previous infection might not be accurate, in part because of the presence of asymptomatic cases, in which individuals may not have been tested for the virus because they never experienced symptoms.

Given the uncertainty about the actual level of population immunity, the investigators embarked to use statistical and simulation modeling, as well as publicly reported COVID-19 death data to extrapolate age-stratified estimates of actual immunity. The study’s primary outcome was population immunity, a metric that accounts for the impact of vaccination as well as those who would have immunity based on previous infections.

That analysis suggested that, as of July 15, 2021, about 114.9 million Americans had been infected with SARS-CoV-2, leading to a mean overall population immunity of 62.0%. On an age-cohort basis, the estimates ranged from 77.2% among Americans 65 and older down to just 17.9% of children under the age of 12.

Galvani and colleagues said those immunity rates may not be good enough to fight off new variants of the disease.

“Variants of SARS-CoV-2 with higher transmissibility, such as the Delta variant, will inevitably increase levels of naturally acquired immunity, but at the cost of potentially increased severe health outcomes,” they noted.

Boosting vaccination rates would help accelerate population immunity, they noted, even if the vaccine is not equally effective against all variants of the virus.

“Our study highlights the need to accelerate vaccination to prevent additional waves of COVID-19 and the evolution of novel variants and to shorten timelines for pandemic control in the United States,” the authors concluded.

Galvani and colleagues also reported on the significant regional variance in population-level immunity.

With such wide variation in immunity status, and with the potential for newer, more contagious variants, the authors said non-pharmaceutical interventions like masking and proactive testing ought to continue “at least until population immunity is sufficiently high to contain the pandemic.” 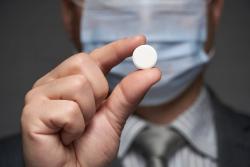