Vaccination for VZV and HPV requires special consideration in immunocompromised patients. They are at risk for more severe viral illnesses if not immune, but they may also have decreased response to, and increased adverse effects from, vaccines.

Immunocompromised patients are at elevated risk of complications from primary and reactivation infections with herpesviruses, including varicella zoster virus (VZV) and human papillomavirus (HPV). In the past several decades, vaccines have been become available to prevent primary VZV infection (chickenpox), reactivation VZV infection (herpes zoster, or shingles), and primary HPV infection, and all are routinely recommended for distinct age groups in the general population.

The presence of immunocompromise requires special attention to several aspects of vaccination. The first is safety: Live attenuated vaccines are “weakened” but potentially have viable virus. This may cause disseminated infection in severely immunocompromised patients, and live vaccines are therefore generally avoided. Inactivated vaccines do not contain live virus and cannot cause disseminated infection; therefore, they are safer. However, many inactivated vaccines contain adjuvants, which might theoretically increase the risk of rejection and/or graft-versus-host disease (GVHD) in solid organ transplant (SOT)1 and allogeneic hematopoietic stem cell transplant (HSCT) recipients, respectively.2 The second consideration is efficacy: Immunocompromised patients may not mount the expected immune response to a vaccine and may therefore derive less benefit.

In this article, we will discuss the specifics of VZV and HPV in immunocompromised patients, with a specific focus on vaccine safety and efficacy in this population. The Table gives a summary of recommendations by type of immunosuppression. 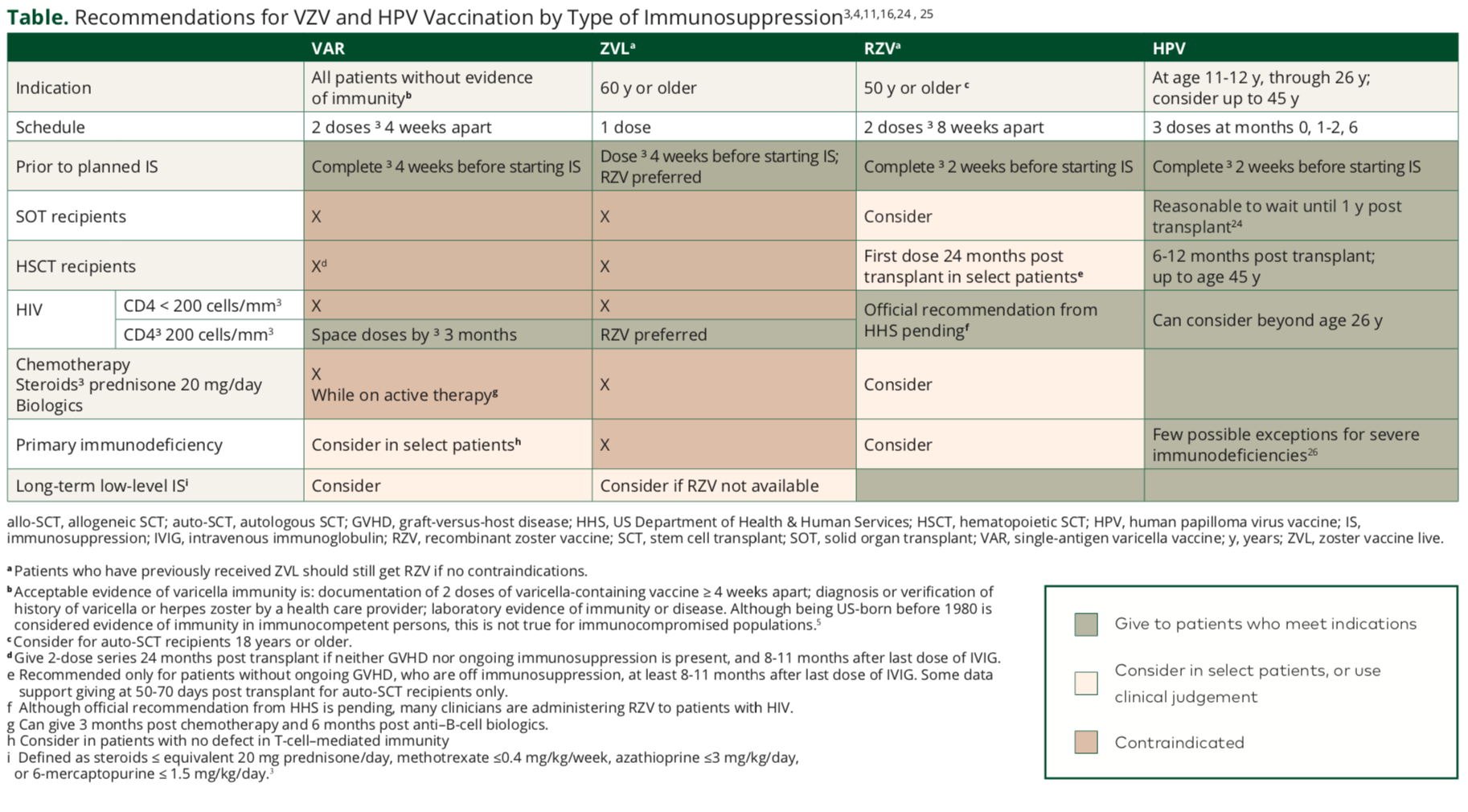 Immunocompromised patients who contract primary varicella infection are at risk for disseminated disease, and they have a several-fold increased risk of death compared with their immunocompetent counterparts.4 The first varicella vaccine was approved in 1995 for the prevention of primary VZV infection in susceptible children and adults. It is available in 2 formulations, both of which are live attenuated: a single-antigen formulation (VAR; Varivax), licensed for use in patients 12 months or older, and a combination formulation with measles, mumps, and rubella (MMRV; ProQuad), licensed only for use in patients aged 12 months to 12 years. MMRV contains a 7-fold higher dose of varicella antigen than the single-antigen formulation,5 and it is not recommended for use in any immunocompromised population. VAR is given as 2 doses at at ages 12-15 months and age 4-6 years for children, and 2 doses at least 4 weeks apart for patients 13 years and older.

VAR has been shown to be safe, effective, and immunogenic in children with HIV and CD4 percentages of at least 15%.6,7 Data on the immunogenicity of the vaccine in the other immunocompromised populations who can safely receive it are lacking.

Immunosuppressed patients are similarly at increased risk of disseminated infection and complications of herpes zoster. Two zoster vaccines exist but only 1 remains available in the United States.8 No longer available is the older of these, known as zoster vaccine live (ZVL; Zostavax), which was approved in 2006. A live attenuated vaccine, ZVL contains 13 to 44 times as much VZV antigen as VAR. The newer zoster vaccine, available since 2017, is called recombinant zoster vaccine (RZV; Shingrix) and is a recombinant glycoprotein E vaccine. Systematic reviews suggested that RZV is more effective than ZVL in reducing the incidence of herpes zoster,9,10 and RZV is now preferred in most clinical contexts.11

Zoster vaccination is indicated for immunocompetent patients 50 years and older. There is no evidence for earlier vaccination in immunocompromised populations, with the exception of patients who have undergone autologous HSCT; autologous HSCT recipients 18 years and older may receive the RZV series starting 50 to 70 days post transplant, on the strength of a 2019 randomized controlled trial (RCT) showing RZV vaccination to be both safe and effective in reducing the incidence of herpes zoster in this population.12 Like other live vaccines, ZVL is contraindicated in many immunocompromised patients; it can be considered for patients with anticipated or low-level immunosuppression and for patients with HIV and CD4200 cells/mm3or greater. In the latter group, it has been shown to be safe and immunogenic.13

For patients with higher-level immunosuppression, RZV is generally considered relatively safe, although for SOT and allogeneic HSCT recipients, there is a theoretical risk that the immune activation generated by the vaccine adjuvant could increase the risk of organ rejection or GVHD. A recent RCT enrolling renal transplant recipients 4 to 18 months post transplant found that RZV induced an immunologic response without increasing the incidence of adverse events, including rejection14; a similar study in lung transplant recipients is ongoing.15 For now, the current recommendation of the American Society of Transplantation and Infectious Diseases Community of Practice is that RZV use for posttransplant patients be determined on an individual basis using clinical judgment.16 Data for RZV use in allogeneic HSCT recipients are lacking. RZV has been shown to be safe and immunogenic in patients with HIV,17 and it is the preferred zoster vaccine for this population (although an official recommendation from the US Department of Health & Human Services is pending).

The HPV vaccine has been available since 2006 for the prevention of HPV-related cancers (eg, cervical, anal, vulvar, vaginal, and oropharyngeal cancers) and genital warts. Previous iterations have included a quadrivalent and a bivalent formulation; the formulation currently available in the United States is a 9-valent vaccine (Gardasil 9) and is recommended for unvaccinated immunocompetent females and males starting when aged 11 to 12 years, through 26 years. The vaccine is FDA approved for use through 45 years, and the Advisory Committee on Immunization Practices recommends shared decision-making for patients aged 26 to 45 years.18 For immunocompetent patients 11 years or older, and for all immunocompromised patients, it is given as a 3-dose series, at 0, 1 to 2, and 6 months.

Immunocompromised patients are at significantly elevated risk of HPV-related cancers,19 and because the vaccine is considered safe, immunocompromised patients should be vaccinated according to the usual age guidelines. In patients with HIV, the quadrivalent vaccine is well tolerated and produces high rates of seroconversion in patients both on and off antiretroviral therapy.20,21 Although immunogenicity is lower in patients with CD4 less than 200 cells/mm3, seroconversion rates are still in the 70% to 90% range, depending on the serotype.22 Data for immunogenicity in patients with immunocompromising conditions other than HIV are more limited. A study of the quadrivalent HPV vaccine in 50 SOT recipients found that the vaccine series produced seroconversion in 53% to 68% of subjects, in contrast to 97% to 99% of immunocompetent patients in prior studies.23

Immunocompromised patients have a higher burden of VZV- and HPV-associated disease. As such, immunization becomes a key strategy to prevent the occurrence of disease. Guiding principles for the administration of vaccines include as follows:

Catherine DeVoe, MD, is a second-year fellow in Infectious Diseases at the University of California, San Francisco. Her research and clinical interests focus on immunocompromised hosts, with a particular emphasis on patients with hematologic malignancies.

Peter Chin-Hong, MD, is Professor of Medicine and director of the immunocompromised host infectious diseases program at the University of California, San Francisco. His primary research interests include donor derived infections in solid organ transplant recipients and molecular diagnostics for infectious diseases in immunosuppressed patients.