New CDC report warns of the growing burden of vector-borne diseases in the United States.

A new Vital Signs Report published by the Centers for Disease Control and Prevention (CDC) has found that vector-borne disease cases have tripled in the United States, with upwards of 640,000 cases reported between 2004 and 2016, underscoring the need for stronger prevention and control efforts.

The report, published in the most recent Morbidity and Mortality Weekly Report (MMWR), assessed data trends pertaining to all diseases that are nationally notifiable and transmitted via the bite of an infected mosquito, tick, or flea.

Authors of the report stressed that out of 16 reportable vector-borne diseases, only 1 of them—yellow fever&mdash;has a vaccine that individuals can use to protect themselves against infection, which is particularly troublesome as the burden of these diseases continues to grow.

“Why the increase? Mosquitoes and ticks are moving into new areas nationwide,” Robert Redfield, MD, director of the CDC said in a media telebriefing. “Oversea travel and commerce are more common than ever before. Travelers can get infected in one country and unknowingly transport it home.” He added that “a number of new germs spread through these bites have been introduced [in the report]—nine since 2004.” 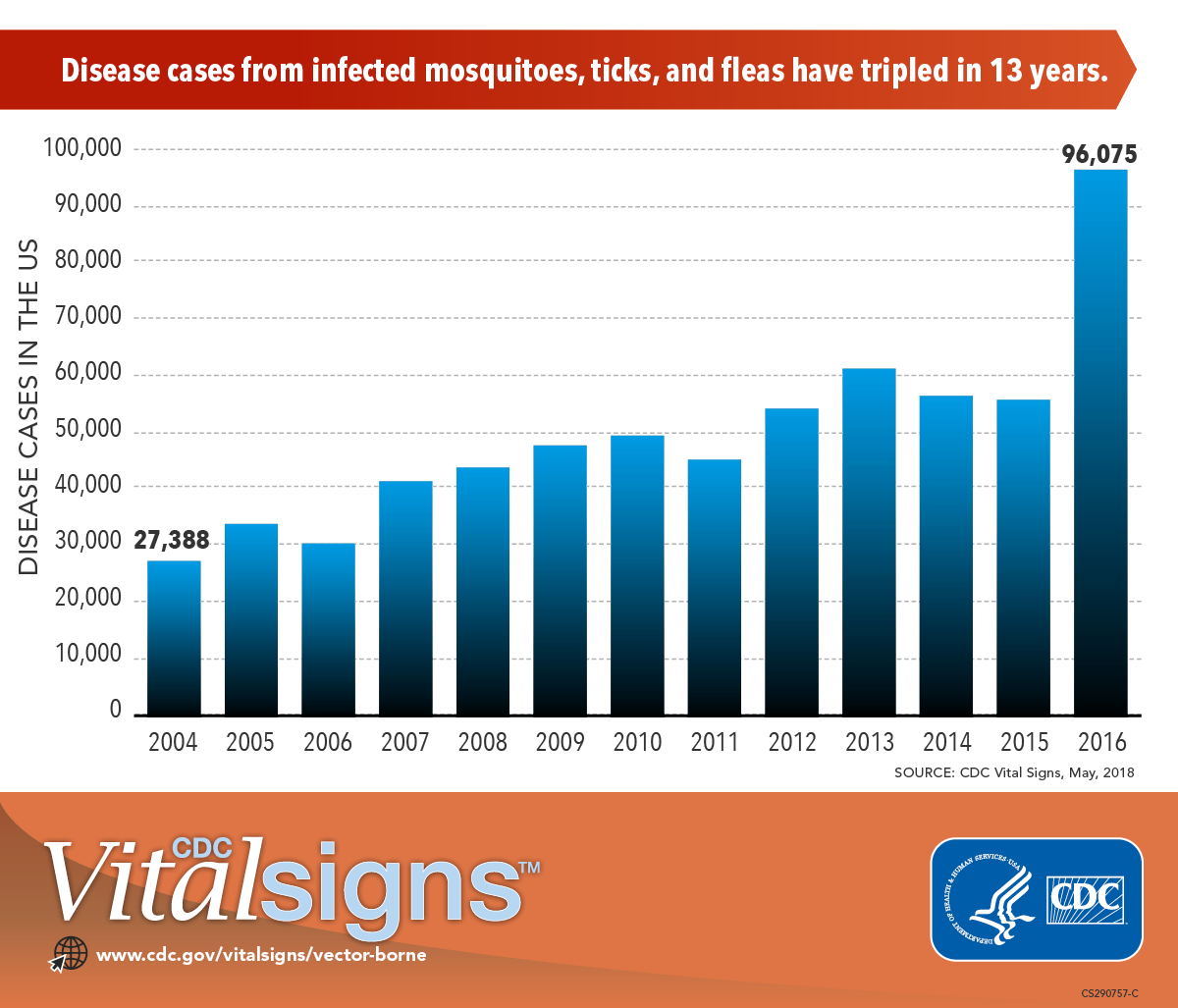 According to the report, the new vector-borne pathogens include the following:

After looking at data reported to the National Notifiable Diseases Surveillance System (NNDSS), the researchers found that tick-borne diseases made up over 75% of reports. In fact, tick-borne diseases actually doubled over the course of the 13-year time period, with Lyme disease accounting for the majority of those infections. The report notes an increasing trend in these diseases each year, whereas the burden of mosquito-borne diseases appears to be more episodic, with numbers fluctuating as epidemics occur. West Nile virus (WNV) was the most commonly transmitted mosquito-borne disease in the continental United States, according to the report, followed by dengue and Zika virus. Plague, albeit rare, was noted as the most common flea-borne disease.

“These diseases are very complicated in nature,” Lyle Peterson, MD, MPH, director of the division of Vector-borne Diseases at the CDC, said on a media telebriefing. “There are many factors which affect where they occur and how frequent they are.” The longevity, distribution, biting habits, and proliferation of the vectors all affect disease transmission, and, according to the report, they’re all dependent on environmental factors such as rainfall, temperature, and shelter.

“Many of these diseases are sensitive to temperatures,” Dr. Peterson said. “Mosquito-borne diseases tend to get worse during heatwaves. Major outbreaks of West Nile virus in the United States have all happened during heatwaves; it tends to make mosquitoes more infectious.” He added that increasing temperatures can expand the range of ticks further north.

As the number of vector-borne cases continues to increase, the burden on local and state health departments has grown as well. In order to effectively prevent and control these infections, improved surveillance is needed, which includes quick, accurate diagnoses and stronger, sensitive tests that can be used on a local scale; furthermore, safe and effective vaccines need to be developed.

“It will take all of us to prevent this,” Dr. Redfield stressed. CDC is working on “rebuilding comprehensive vector control programs that have eroded over time,” according to the report authors, in addition to working with health departments and organizations on improving surveillance, developing guidance, and increasing public awareness regarding these diseases.

“The bottom line is this: illnesses from tick, mosquito, and flea bites continue to impact our nation. The threat of disease spread by these vectors are increasing,” Dr. Redfield warned. “With summer approaching, we know that we are vulnerable to disease spread by [these vectors]. Protection is possible…It sounds ambitious, but I would encourage everyone to never underestimate the power of the possible. It can be done, we just have to work together.”