An Unusual Case of Testicular Swelling in a Patient With HIV

A 42-year-old man presented to the hospital with approximately 2 weeks of right testicular pain and swelling. He received a diagnosis of epididymo-orchitis and was treated with ceftriaxone 250 mg intramuscularly and doxycycline 100 mg twice daily for 14 days. During a follow-up visit at his primary HIV provider’s office, the patient noted that he had less pain, but his swelling had not resolved. He denied any history of fever, weight loss, night sweats, cough, or hemoptysis.

The patient had a history of HIV, which was diagnosed in 2014 and had been treated with abacavir/dolutegravir/ lamivudine (Triumeq). One month prior to admission, his CD4 count was 304 (22%), and his HIV RNA by polymerase chain reaction (PCR) was undetectable. Early in his diagnosis, he had frequent episodes of syphilis, now with a nonreactive rapid plasma regain after adequate treatment.

The patient was born in the United States and lived on the East Coast. He denied any national or international travel. He denied smoking, alcohol, and illicit drug use. He had a pet dog. He had a history of incarceration for approximately 6 months many years ago.

The patient appeared well. His temperature was 98.6°F; heart rate, 75 beats per minute; blood pressure, 110/70 mm Hg; and respirations, 14 per minute. His lungs were clear to auscultation bilaterally. A cardiac exam showed normal S1 and S2 with no murmurs. An abdominal examination showed normoactive bowel sounds with no tenderness and no hepatosplenomegaly. On a genital exam, the patient’s right testicle was swollen and nontender; the left was normal. The inguinal lymph nodes were not palpable.

The patient was referred to urology to rule out malignancy. After a long discussion, a decision was made to pursue a right inguinal exploration. Despite negative malignancy markers and due to the appearance of the testicle, the patient underwent a right orchiectomy. On gross examination, the testicle was 8 cm, with a smooth-walled cyst and 2 ill-defined masses/thickened areas in the testis and epididymis with purulent material.

The operating room specimen was sent to pathology, and the right testicle and epididymis showed large areas of destruction by multiple caseating and noncaseating epithelioid granulomas with scattered foreign body giant cells and surrounding fibrosis (Figure 1). The auramine-rhodamine stain showed a few rodlike bacteria, highly suspicious for Mycobacterium species (Figures 2 and 3). There was not enough of the sample to be sent for an acid-fast bacilli (AFB) culture. The testicular specimen was sent to the US Centers for Disease Control and Prevention for PCR testing, and tuberculosis (TB) was confirmed. Because this was PCR, susceptibilities could not be performed. Three early-morning urine specimens were sent to the lab for AFB stain and culture. All urine specimens grew Mycobacterium tuberculosis (Mtb). 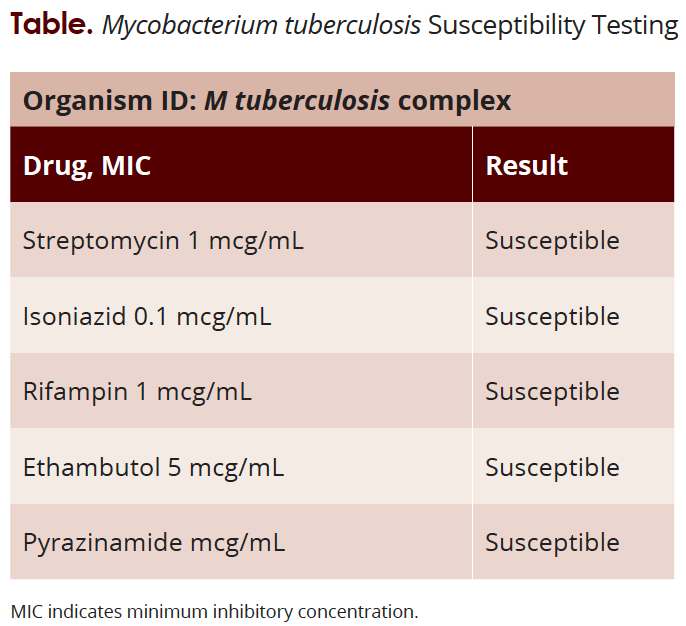 Tuberculosis, a disease affecting one-fourth of the world’s population, is primarily caused by Mtb, an acid-fast aerobic bacillus.1 Infection occurs when bacilli are inhaled from a patient with active pulmonary infection. These bacilli reach the alveoli, where they are phagocytized by alveolar macrophages and then replicate before diffusing to nearby endothelial and epithelial cells.2 At this early stage of disease, bacilli can spread lymphatically or hematogenously to other organs before the development of an effective immune response. This stage, known as primary infection, is usually clinically and radiographically silent. In patients with a normal immune system, T cells and macrophages surround the organism in granulomas that limit their multiplication and spread. At this point, the infection is contained but not eradicated, which is known as latent tuberculosis infection (LTB). Active infection will develop in approximately 5% of individuals with LTB, with half of these cases occurring within 2 years after primary infection.3 Although TB is a known multisystem disease, it exclusively affects the lungs in 75% to 80% of cases, with the majority of extrapulmonary disease manifesting in the pleura and lymph nodes.4

Urogenital TB is rare, thought to make up just 30% to 40% of these extrapulmonary cases.5 Involvement of just the genital organs is described in 5% to 30% of these urogenital cases, with higher rates observed where TB is more prevalent.6 The mechanism of dissemination of disease into the scrotal sac is debated. In most cases, TB epididymo-orchitis occurs via retrograde spread from the urinary tract, but it also may gain entry via the early hematogenous and lymphatic spread of primary pulmonary disease.7 Sexual transmission with primary penile TB is also thought to be possible. Of note, half of patients with urogenital disease have renal involvement.8

Presentation of this disease is variable and can occur at any age, although it most commonly presents in the fourth and fifth decade. History of prior TB infection, close contact with TB infected individuals, travel to endemic areas, or immune system compromise may be helpful diagnostically, but these data points are not always present.9 Eighty percent of hosts infected with genital TB may develop a scrotal swelling, which is painful in approximately 44% of cases.10 It is often accompanied by ulceration or a draining sinus tract and may present with lower urinary tract symptoms such as dysuria and hematuria.9 Genital TB without evidence of pulmonary disease can occur, and systemic symptoms such as fever, chills, and night sweats are not reliably present.5 Presentation may mimic multiple conditions including testicular tumor, testicular torsion, hydrocele, acute infections, or testicular sarcoidosis.11

Because of the disease’s nonspecific symptoms, it is recommended that TB always be considered in the differential diagnosis of cases with prolonged, unresolved urinary symptoms.12 Early diagnosis is critical to preventing destruction and fibrosis, which can lead to infertility, contracted bladder, bilateral kidney injury, and end-stage renal disease.13 Microscopic analysis of the urine may yield nonspecific findings such as sterile pyuria, microscopic or macroscopic hematuria, or acidic urine. Definitive diagnosis can be made by urine acid-fast culture cultures, a method that is time intensive, with relatively low sensitivity due to sporadic shedding of bacilli.9 Due to these constraints, PCR testing can be performed on urine, expressed prostatic secretions, or ejaculate. PCR is less sensitive and similarly specific compared with culture, but it is advantageous due to its rapidity. PCR cannot, however, differentiate between live and dead organisms.14 In this case, histopathological examination should be attempted with inguinal exploration, yielding caseous necrosis or stained AFB testing for definitive diagnosis. Necrotizing granulomatous inflammation without evidence of AFB suggests TB but can also represent another infectious agent, such as species of Brucella or Blastomyces, Treponema pallidum, and nontuberculous mycobacteria, as well as others.10 For this reason, tissue PCR for TB is still useful in optimizing diagnostic precision.

Of the 10 million incident cases of TB in 2017, 9% were coinfected with HIV.1 Patients with HIV are more susceptible to all manifestations of TB infection, including epididymo-orchitis, due partly to the critical role of CD4-positive T lymphocytes in the control of the disease.15,16 First-line treatment for drug-susceptible strains in both immunocompetent and immunocompromised hosts is antimycobacterial chemotherapy including a course of isoniazid, rifampin, ethambutol, and pyrazinamide with pyridoxine. A 6-month course is likely as effective in urogenital TB as it is in pulmonary TB because pulmonary TB is the more standard presentation.17 No randomized control trial has been performed to identify the ideal treatment duration. Despite the effectiveness of treatment with this regimen, regular annual follow-ups are recommended to evaluate for relapse.