Infections transmitted by these bloodsucking species are on the rise worldwide.

Pathogens transmitted by ticks cause the vast majority of vector-borne diseases in temperate North America, Europe, and Asia. In the continental United States, more than 95% of reported human cases of vector-borne diseases are caused by tick bites.1 Lyme disease may exceed 300,000 cases annually, about 10-fold higher than the number of reported cases,2 ranking it among the most common infections in the United States, second only to sexually transmitted diseases.

In addition, other tick-borne infections account for more than 10,000 reported cases annually,1 but the number of actual cases is likely much higher.3,4

There are 2 main families of tick species, Argasidae and Ixodidae, which differ considerably in their ecology, behavior, geographic distribution, and public health importance. The Argasidae, or soft ticks, are found mostly in the tropics and deserts, feed quickly (from minutes to an hour), and take several blood meals per stage, similar to what bedbugs do. Because of their short feeding time, soft ticks transmit few pathogens. The Ixodidae, or hard ticks, are found in a variety of habitats, including suburban areas and city parks in temperate climates, and feed on a host for several days. Because of this prolonged contact with their hosts, they transmit a variety of pathogens that cause many common tick-borne infections worldwide, including Lyme disease and tick-borne encephalitis.

Hard ticks have 3 active feeding stages: larva, nymph, and adult. Larvae typically feed on smaller mammals such as rodents, where they acquire the pathogens. Nymphs usually feed on a wider variety of hosts, including humans. Small, inconspicuous nymphs often go undetected and thus can transmit pathogens to humans. Adult ticks are much bigger than nymphs, feed on larger animals, and are capable of transmitting pathogens to humans. Females are larger than males. Accurate identification of ticks and their stages is essential for health care practitioners for diagnosis, treatment, and prophylaxis.5

Ticks transmit a variety of infectious agents including viruses, bacteria, and protozoan parasites (Table). Tick-borne diseases are usually characterized by short incubation times and rapid onset of acute systemic symptoms such as chills, sweating, headache, myalgia, arthralgia, malaise, nausea, and vomiting.6 Many diseases are biphasic, with several days of illness followed by remission and then more severe acute symptoms. Tick-borne diseases range from brief and self-limited to protracted, relapsing, and life-threatening illnesses, depending on the pathogen implicated, as well as the immune status of the patient.

Treatment of tick-borne diseases is a complex and sometimes controversial subject covered in numerous publications and guidelines.5,7 Generally, treatments vary based on the type of pathogen but are similar within each group. For viral tick-borne pathogens, avoiding tick bites is the best and often only available course of action.8 The most notable exception is tick-borne encephalitis virus, for which several safe and effective vaccines are used in Europe, Russia, and China.9 All require several doses followed by booster vaccinations every 3 to 5 years to maintain immunity. Tick-borne bacterial diseases are typically treated with tetracyclines.10 Doxycycline is commonly recommended as the treatment of choice for Lyme disease, human granulocytic anaplasmosis, human monocytotropic ehrlichiosis, and Rocky Mountain spotted fever.5,7,10 The recommended therapy for babesiosis, a tick-borne disease caused by a protozoan parasite, consists of atovaquone and azithromycin or clindamycin and clindamycin combinations.5

Tick-borne encephalitis (TBE) complex (Flavivirus) is arguably the most significant viral infection transmitted by ticks, with more than 10,000 hospitalized cases per year, mainly in Europe, Russia, China, and Japan.10 Members of this group, such as TBE virus, louping-ill virus, and Powassan virus (POW), cause encephalitis.11 Omsk hemorrhagic fever is febrile with hemorrhagic symptoms,12 whereas Kyasanur Forest disease (KFD) causes both encephalitis and hemorrhages.13 TBE virus is emerging in parts of Europe due to climate and land use changes.14 However, the most significant recent trends represent the rise of TBE group viruses outside the typical temperate Eurasian range.15 In North America, POW virus is now considered an emerging disease,16 and on the Indian subcontinent, KFD is on the rise.14

Bunyavirales (formerly Bunyaviridae) is another important group and perhaps the most daunting among the emerging tick-borne viruses. Crimean-Congo hemorrhagic fever virus (CCHFV), associated with more than a dozen tick species and multiple wildlife hosts, is the most geographically widespread of all tick-borne viruses in Eurasia and Africa.17,18 CCHFV and its transmission cycles are well characterized and understood; nonetheless, it remains an important emerging pathogen over much of its range.14,15 CCHFV is a disease of the nervous system, with neurological symptoms preceding more dramatic hemorrhagic symptoms.18 The incubation period is short, with rapid onset of a severe headache, dizziness, neck pain, and vomiting.17,18 After a few days, hemorrhagic symptoms on mucous membranes and skin, as well as external and internal bleeding, are common. Mortality can be very high (at least 30%), especially when nosocomial transmission occurs.17,18

Unlike the long epidemiological record of CCHFV, closely related viruses from a different Bunyavirales genus, Phlebovirus, are among the most recent but noteworthy emerging pathogens. A new Phlebovirus transmitted by ticks, first described in 2009, causes severe fever with thrombocytopenia syndrome (SFTS) characterized by fever, thrombocytopenia, leukocytopenia, and gastrointestinal symptoms.19-21 There are approximately 1000 cases per year of SFTS virus (SFTSV), with 6% to 30% mortality in China, as well as sporadic cases in Japan and South Korea.19,20 The Asian longhorned tick (Haemaphysalis longicornis) is the main vector.21 Until recently, this species was present only within its native range in East Asia (China, Korea, Japan), as well as in Australia, New Zealand, and some Pacific Islands, where it was previously introduced.22 In 2017, an established Asian longhorned tick population was found in New Jersey,23 quickly followed by several other states. Based on climatic factors, H longicornis has the potential to spread to the eastern United States and parts of the West Coast.24 Particularly suitable for this species are areas of the Midwestern United States, where another novel Phlebovirus, the Heartland virus, which is closely related to SFTSV, was isolated in 2009 from 2 patients, and several more confirmed cases presented over the following years.25 Symptoms are similar to those of other tick-borne diseases, including fever, leukopenia, and thrombocytopenia. However, this virus can also cause rapidly fatal, widely disseminated infection, with severe shock and multisystem organ failure.26,27

Lyme borreliosis, the most important vector-borne disease in the northern hemisphere, is caused by various strains or genospecies of Borrelia burgdorferi.1,15,28 A new member of this group, Borrelia mayonii, was recently described in patients and ticks from the upper Midwest.29 Interestingly, B mayonii was found in high numbers in patients’ blood, which is atypical in individuals infected with other genospecies of B burgdorferi. Some Borrelia species cause tick-borne relapsing fever, which is usually transmitted by soft ticks.30 One exception is Borrelia miyamotoi, which is vectored by the same Ixodes species that transmit Lyme borreliosis. The number of diagnosed human cases is low, in part because the disease generally runs its course like a limited febrile illness.31 Usually, patients experience an influenza-like illness, with high fever, leukopenia, and thrombocytopenia, followed by a relapse about a week later in about 10% of patients.31,32

Another important group, tick-borne rickettsial diseases such as spotted fevers and tick typhus, have a worldwide distribution with many emerging pathogens.13,33,34 In the United States, Rocky Mountain spotted fever is the most common (several thousand cases) and lethal (~20% mortality) rickettsiosis, causing frequent hospitalizations and even death in untreated patients.4,35 Two less severe rickettsial diseases are now recognized in the United States. Rickettsia parkeri is found in the southeastern part of the country and vectored by the Gulf Coast tick (Amblyomma maculatum). The disease’s onset is characterized by the presence of an eschar or a vesicular or pustular rash and the relative absence of nausea, vomiting, and diarrhea.35 It is also an emerging disease in South America.36 Similarly, on the West Coast, Rickettsia philipii is transmitted by the Pacific Coast tick (Dermacentor occidentalis) and can be differentially diagnosed by presence of eschar.37

Other representatives of the order Rickettsiales, Anaplasma and Ehrlichia species, are emerging human pathogens. Anaplasma phagocytophilum is the most prevalent pathogen within this group, causing close to 6000 cases of human granulocytic anaplasmosis (HGA) per year in the United States.38 The disease is transmitted by Ixodes scapularis ticks in the northeastern United States and Ixodes pacificus in California. HGA generally presents with nonspecific symptoms including fever, chills, malaise, headache, and myalgia; if not treated appropriately and on time, some patients can develop life-threatening complications.38,39

Although rare, Ehrlichia muris eauclairensisis has been detected in patients with thrombocytopenia and lymphopenia in Minnesota and Wisconsin.40,41 Unlike other Ehrlichia species that are vectored by lone star ticks (Amblyomma americanum), E muris eauclairensisis is transmitted by the black-legged tick (I scapularis). Another yet to be cultured Ehrlichia bacterium, Candidatus Neoehrlichia mikurensis, has been detected in the blood of patients who developed prolonged fever, erysipelaslike rashes, thromboembolic complications, or septicemia in Europe and parts of Asia, where it is vectored by Ixodes ricinus and Ixodes persulcatus ticks.42-44

Human babesiosis is caused by intraerythrocytic Babesia species, an emerging tick-borne disease in the temperate northern hemisphere.15,28,45 In North America, Babesia microti is common in the northeastern United States, whereas Babesia duncani is an emerging pathogen along the Pacific Coast.45,46 Patients experience flulike symptoms and hemolytic anemia; however, elderly and splenectomy patients are at higher risk of serious or fatal disease, especially from Babesia divergens infections in Europe.45,46

Red meat allergy meditated by IgE antibody directed against a mammalian oligosaccharide epitope, galactose-α-1, 3-galactose, is an emerging condition in many parts of the world and attributed to tick bites.47,48 Urticarial or anaphylactic reactions occur several hours after eating red meat such as pork, lamb, beef, or kangaroo. In the United States, the lone star tick has been implicated as the main culprit in case reports of delayed angioedema, a painful and pruritic urticarial rash, and also causes abdominal pain, diarrhea, and sore throat.49,50 With its recent introduction in the United States, the Asian longhorned tick was identified as the most probable cause of red meat allergy in Japan.51

Expanding vector tick populations are driving resurgence of tick-borne diseases worldwide, especially in temperate America, Europe, and Asia. Much of North America is endemic for a confounding variety of tick-borne diseases. However, tick-borne pathogens are easily categorized into viral, bacterial, and protozoan infections, with similar clinical picture and treatments within each group. In high-risk areas, public health practitioners should become familiar with tick species of medical importance, their stages, and established or emerging tick-borne pathogens.

Rochlin has worked as a medical entomologist, research scientist, and laboratory director for state and local public health agencies. He has been affiliated with Center for Vector Biology at Rutgers University in New Jersey since 2013. Toledo is an assistant professor at Rutgers University in New Jersey and a faculty member at the Center for Vector Biology. 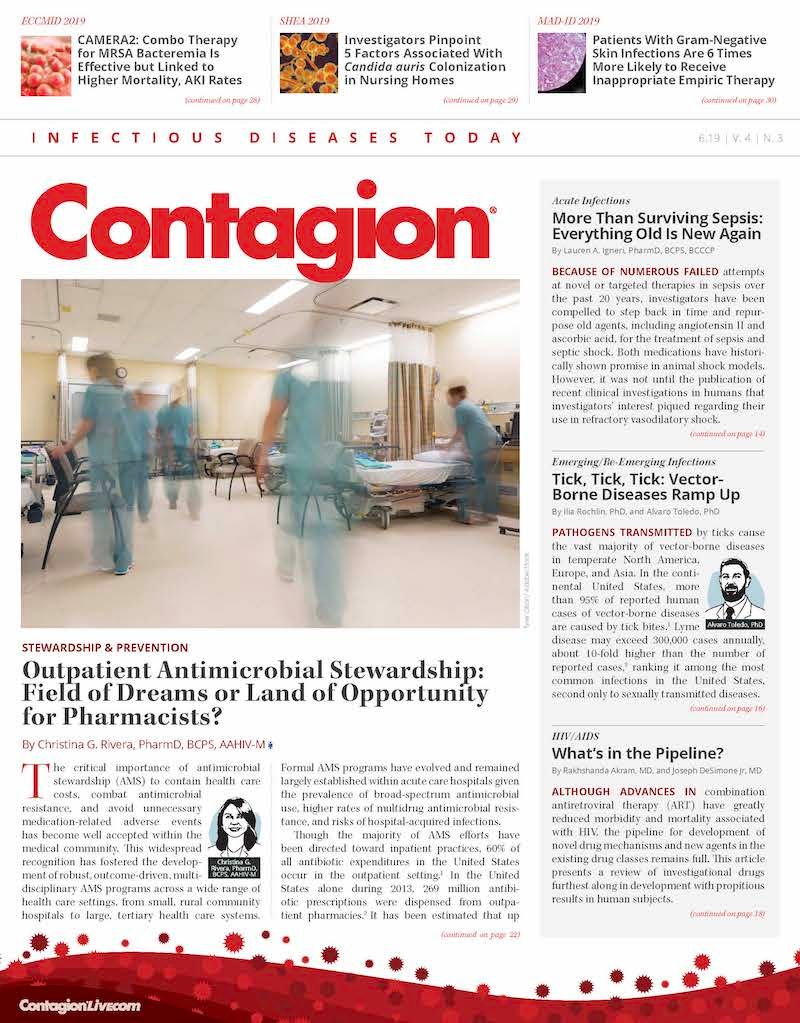