Experts continue to recommend that people get the seasonal flu vaccine as the scientific community works toward a universal vaccine offering lifelong protection against multiple strains.

The 2017-2018 influenza season in the United States was one of the most severe in recent memory. High rates of flu occurred all over the country simultaneously, in contrast to most seasons of the past decade, when certain states would peak with flu activity while others remained relatively quiet (see Chart). This sustained and widespread high level of flu activity resulted in a jump in hospitalizations. Death rates were highest in the over-65 age group, which is typical, but the second most affected group comprised those aged 50 to 64 years old; normally, the second highest death rates occur in children, from birth through age 4 years.1 The ferociousness of the flu season overall, combined with above-average impacts on younger baby boomers, made 2017-2018 one for the record books.

“It was certainly a severe season,” Anthony Fauci, MD, director of the National Institute of Allergy and Infectious Diseases, told Contagion®. “Within the past 10 years, not counting the H1N1 (swine flu) pandemic of 2009, and just looking at seasonal influenzas, there’s no doubt that this has been the worst season we’ve had in the last decade.” According to data from the US Centers for Disease Control and Prevention (CDC), flu seasons that are considered serious typically occur when influenza A (H3N2) is especially prevalent, as it was this year. During a serious season, there can be up to 35 million cases of flu, with 700,000 hospitalizations and 56,000 fatalities.

Part of the problem is that receiving the seasonal flu vaccine is far from a guarantee of avoiding the flu. Unlike with vaccines against diseases such as measles and polio, which offer 100% protection, getting a seasonal flu shot gives you a better chance of not contracting the flu or of having a less severe case if you do contract it. 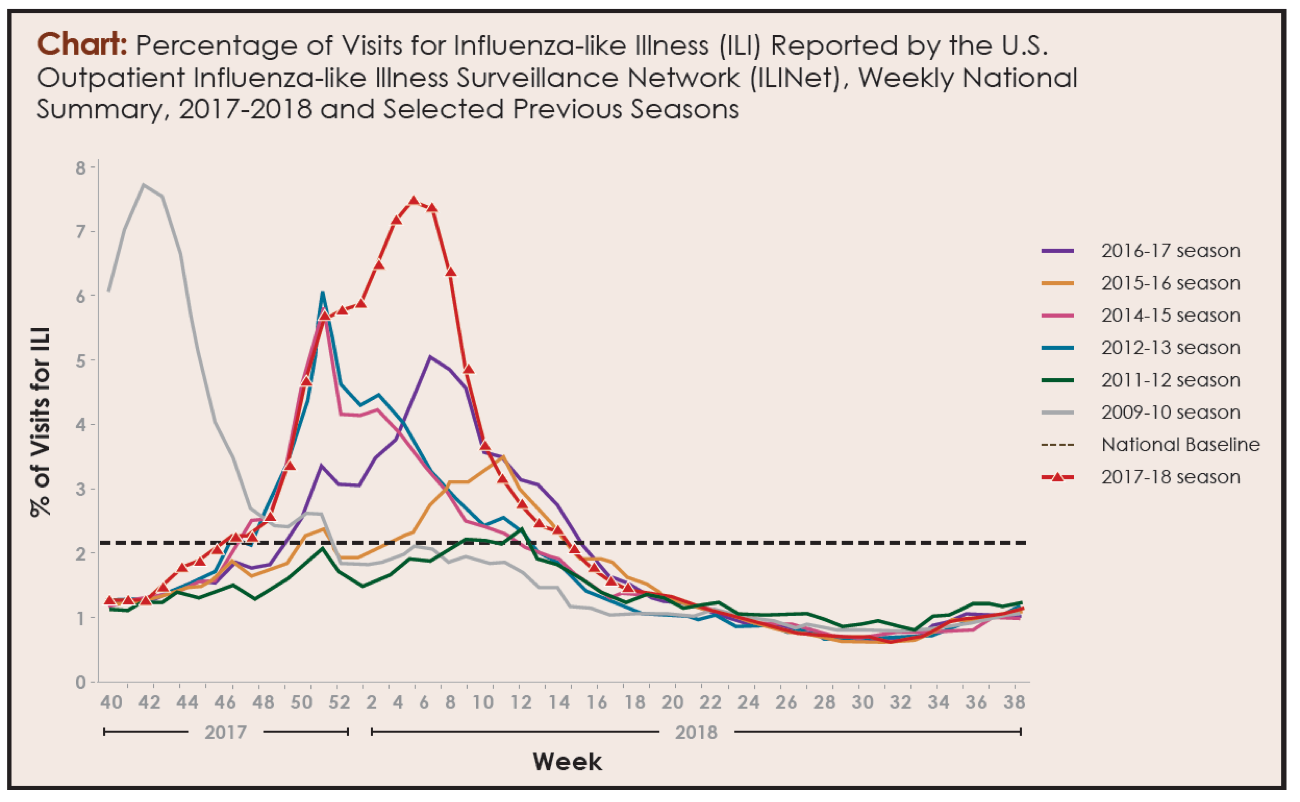 Although those aged 65 and older bore the brunt of hospitalizations and deaths from flu this past season, as they do every year—estimates are that 71% to 85% of all flu deaths every year occur in people in this age group&mdash; the group at next highest risk was those aged 50 to 64, the younger baby boomer cohort. This represented a deviation from the norm, in which the youngest children are the most vulnerable, after the elderly.

Why did middle-aged individuals find themselves felled by the flu in higher numbers than in other years? Dr. Fauci suggested it had to do with imprinting, or the very first flu virus to which people in this age group were exposed as young children. “Your first exposure will influence how you respond for the rest of your life,” he said. “You have a better response to what you were initially exposed to.” In other words, there’s a good possibility that from the mid-1950s to the mid-1960s, when individuals in this age group were born, the viruses floating around were not H3 viruses different strains, such as H2. This could have resulted in individuals in this age group having a comparatively poor response to the strains circulating this past season.

Compounding the problem is that each seasonal flu vaccine is created using data from past flu outbreaks, data that is more than a year old by the time the next flu season is underway. This lag time often results in a mismatch between the strains of the virus that are in the vaccine and the strains that are actually prevalent.

“The virus protection would be 80% or 90% if we would be infected by the strains that are in the vaccine,” said Peter Palese, PhD, chair of the Microbiology Department at the Icahn School of Medicine at Mt. Sinai in New York.

UNIVERSAL VACCINE ON THE HORIZON?

Given the incompleteness of the protection afforded by the seasonal flu vaccine, researchers are eager to provide people with a universal flu vaccine, one that would offer comprehensive protection against many strains of influenza for far longer than a year. “It’s really important that we understand that this flu vaccine that we’re using today is largely based on World War II technology,” Michael Osterholm, PhD, MPH, director of the Center for Infectious Disease Research and Policy at the University of Minnesota and co-author of Deadliest Enemy: Our War Against Killer Germs (Little, Brown and Company, 2017), told Contagion®. “We just really have an outdated vaccine. That’s a real challenge that we have. The good news is that we do believe that the technology is there and that we can get better vaccines.”

The majority of current seasonal vaccines are made using chicken eggs. The virus is injected into the eggs, allowed to replicate, then harvested and rendered inactive for use in vaccines. One challenge of using this technology is the availability of enough eggs.2 Another is the fact that being grown inside of an egg can alter a virus enough that the immune system is spurred to create antibodies, rendering the vaccine less effective. An alternative is cell-based flu vaccines, which involve growing the viruses inside the cells of live animals (mammals). This technology means more vaccines can be created in less time and the viruses are not at risk of mutating in the way they are with eggs. However, availability of cell-based flu vaccines is still quite limited.3

The big hope, of course, is a universal vaccine that will erase the need for the yearly shot. Dr. Palese is one of the researchers at the forefront of universal flu vaccine development. “My lab initiated the technology, which is referred to as reverse genetics,” he said, describing the process of creating influenza virus in the lab. “One of the things we succeeded [in] was to reconstruct the extinct 1918 virus in the laboratory.” This reconstruction, he explained, is used to create more effective vaccine strains in the future. His team is 1 of 3 at Mt. Sinai that’s working on a universal vaccine designed to offer lifetime immunity to the flu—or at least for a couple of decades.

Although different strains of influenza emerge from year to year, compromising the effectiveness of the seasonal vaccine, certain parts of the virus remain identical from strain to strain. Palese and colleagues are focusing on these unchanging components of the virus and designing a universal vaccine that will target them. The goal is to make the universal vaccine “like a stealth bomber,” he said. “We are trying to fool the immune system.” So far, the vaccine has worked well when tested on ferrets, but large-scale availability for humans is a long way off. Two phase 1 trials that began this past fall and are expected to last more than a year have generated a lot of buzz in the scientific community. “We have good reason to believe….that it should work in humans,” Dr. Palese said. But when might such a universal vaccine be on offer to every consumer? “Ask me something easier,” he was quick to reply.

Despite the imperfection of the current egg-based seasonal flu vaccine, doctors and public health officials continue to stress the importance of receiving it in the absence of anything better. “It is noteworthy that the overall vaccine effectiveness for children 6 months through 8 years old was 59%,” said the CDC’s Nordlund. “To put this more simply, that means a vaccinated child’s risk of having to go to the doctor because of an influenza illness was reduced by half. The vaccine effectiveness against H3N2, specifically, was also greatest among children 6 months through 8 years: 51%. Even with vaccine effectiveness in the range of 30% to 60%, flu vaccination prevents millions of illnesses and tens of thousands of flu-related hospitalizations each year.”

Those numbers will have to suffice for now, according to Dr. Osterholm, who says he doesn’t see any major advances happening in the next few years. “It’s very possible we may be able to have a very highly effective universal flu vaccine, but we’re a long ways off,” he said, citing a lack of funding. Senator Edward Markey (D-MA) recently introduced the Flu Vaccine Act, with the goal of a $1-billion investment over a 5-year period toward a universal vaccine, or $200 million per year. Congress instead allocated $100 million for fiscal year 2018.4 It’s an improvement over the $64 million spent in fiscal year 2017, but not enough, in Dr. Osterholm’s opinion: “Right now we’re still really nibbling at the edges, at best, in terms of our seriousness [about putting money toward the development of a vaccine].”

Ms. Saloman is a health writer with more than 20 years of experience working for both consumer-and physician-focused publications. She is a graduate of Brandeis University and the Medill School of Journalism at Northwestern University. She lives in New Jersey with her family.