Preliminary studies provide convincing evidence for the synergistic use of sulfonamide agents with azole antifungals.

Invasive fungal infections caused by Candida species are a leading cause of bloodstream infections in the United States and have a mortality rate approaching 50%.1 Further complicating this matter is the development of high-level azole resistance in normally suscep&shy;tible species such as C albicans.2 The current first-line treatment of candidemia recommended by the Infectious Diseases Society of America is an echinocandin antifungal agent, with fluconazole as an alternative agent after confirmation of the absence of azole resistance.3 Azole drugs have advantages over echinocandins, including cost and oral options.

Synergistic strategies that could overcome azole resistance may play an important clinical role in the treatment of candidemia. Previous reports demonstrated the ability of some drugs to reverse azole resistance in vitro.4 However, the drug concentrations required to achieve the effect were not achiev&shy;able in vivo and some of the drugs are known to possess significant adverse effects. Preliminary reports showed a synergistic activity of sulfonamide agents in combination with azole antifungal agents for C albicans infection and in combination with caspofungin for Aspergillus infection.5-7 Eldesouky and colleagues confirmed this effect for sulfon&shy;amides in combination with azole drugs against C albicans, with prom&shy;ising activity in vivo. The concentrations of the sulfonamide drugs achieving the minimum inhibitory concentration (MIC)—lowering effect in azole drugs were at or below their clinically achievable plasma ther&shy;apeutic concentrations.

Additional studies investigated the ability of the drug combina&shy;tions to inhibit C albicans biofilm formation. Several sulfonamide/ fluconazole combinations were tested against 12 C albicans strains. Several of the combinations showed increased inhibition of biofilm formation compared to fluconazole alone (up to 40% vs 15%). The sulfonamide/fluconazole combination was also effective in reducing fungal burden in the C elegans worm infection model, with results approaching a 50% mean fungal burden reduction in worms infected with an azole-resistant C albicans strain compared with those treated with fluconazole alone. The researchers attempted to identify a poten&shy;tial mechanism for the drug synergy observed. Although most azole re-sensitizing drugs appear to work by inhibiting the overexpression of drug efflux pumps, this did not hold true for the sulfonamide drugs. The synergistic activity of the sulfonamide drugs was shown to be related to their antibacterial mechanism of inhibiting folate produc&shy;tion. The investigators hypothesized that inhibition of the fungal folate pathway by the sulfonamide drugs led to a restriction of the Candida ergosterol biosynthesis pathway.

Additional in vivo and mechanistic studies will be required to further explore the clinical utility of this drug combination; however, these preliminary studies provide convincing evidence for the synergistic use of sulfonamide agents with azole antifungals. 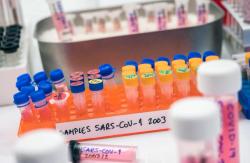 Who Doesn’t Love a Prequel? SARS Before CoV-2
Advertisement

Looking Beyond C difficile: The Potential of the Gut Microbiome