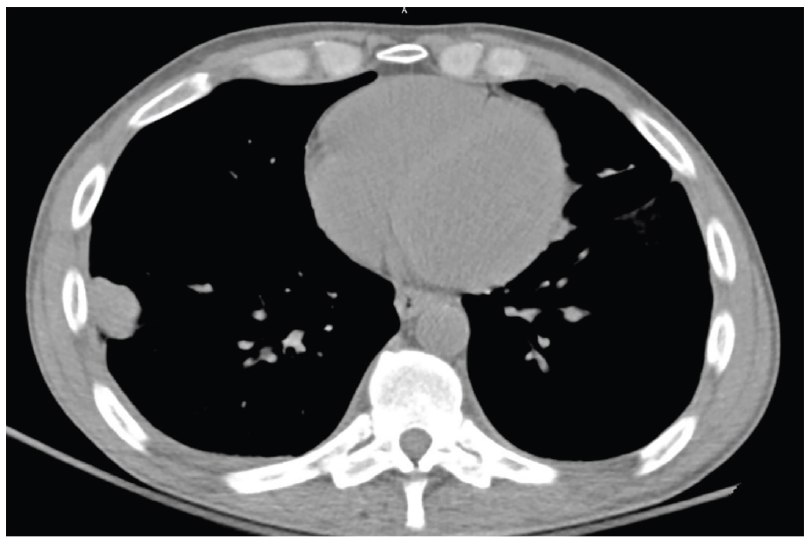 A 47-year-old man was brought to the emergency department by police due to erratic behavior and suspected intoxication. He had been found shouting in the street and had lost control of his bowels. He was initially unable to provide additional pertinent history due to his altered mental status.

The patient later reported a history of uncontrolled HIV and a history of polysubstance use, including inhaled methamphetamine and intravenous heroin.

The patient was not taking any prescription medications. He previously was prescribed antiretroviral therapy but had not taken it for more than 1 year.

The patient had been vacationing in Florida for the past 2 weeks. He was from California, where he lived alone in a single-family home. He denied any known sick contacts.

The patient was hemodynamically stable on presentation. Physical examination was notable for slurred speech, confusion with the patient oriented only to self, agitation, and choreoathetoid movements including lip smacking and repetitive jerking of the upper and lower extremities. He had no focal neurological deficits. His reflexes and muscle strength were equal across the extremities.

Initial studies revealed leukocytosis of 14.1 cells/µL, mixed cell lines without neutrophil predominance, and elevated creatinine of 3.4 mg/dL. His HIV viral load was 323,000 copies/mL and CD4+ count was 278 cells/mm3. His urine drug screen was positive for methamphetamine. The other results of his complete blood cell count, comprehensive metabolic panel, and toxicology panel were unremarkable. Based on his neurologic symptoms, a central nervous system infection was suspected, and a lumbar puncture was immediately performed. Opening pressure was within normal limits. Cell count, Gram stain, and cerebral spinal fluid protein levels all were within normal limits. Aerobic, anaerobic, and fungal cultures were negative. A brain CT showed global cerebral atrophy. An MRI revealed global and caudate atrophy consistent with possible Huntington disease.

On hospital day 2, he was febrile (102.7 °F) with associated nonproductive cough. He was started on broad-spectrum antibiotics vancomycin, piperacillin-tazobactam, and azithromycin. Chest x-ray revealed a pneumonic consolidation in the left lower lobe and a well-defined right lower lobe nodule. Chest CT confirmed a pleural based mass measuring 2.4 cm × 2.2 cm (Figures 1A, 1B).

Throughout the hospitalization, the patient’s chorea and speech improved. Underlying Huntington disease exacerbated by amphetamine use was suspected, although the patient refused genetic testing. He was started on oral fluconazole at a dose of 400 mg daily, which was to be continued for a minimum of 3 months. Additionally, antiretroviral therapy was initiated. The patient wished to return home to California to continue medical treatment.

C neoformans and C immitis are independently rare opportunistic mycoses, with coinfection representing an exceptionally uncommon entity. As our literature review returned no prior reports of such a coinfection, we report the first case of coinfection with these specific organisms. We hypothesize that such a coinfection occurred in this patient due to severely impaired host immune function coupled with geographic prevalence of these fungal species.

Pulmonary coinfection with other fungal species has rarely been documented in isolated case-reports; these fungal coinfections include Histoplasma and Cryptococcus, as well as Cryptococcus and Aspergillus.1-3 In those cases, the majority of patients had evidence of significant immune compromise. It also has been postulated that existing pulmonary cavitary lesions may provide optimal breeding grounds for fungi, resulting in coinfection.1

C neoformans is an encapsulated yeast found in soil and bird droppings worldwide. Despite its wide distribution, it accounts for only approximately 20% of pulmonary fungal infections.4 Pulmonary cryptococcosis may have an indolent presentation or may cause cough, increased sputum production, and chest pain.5 In individuals with altered immune function, it may establish latent infection through persistence within granulomas or may cause disseminated disease such as meningitis.5 Radiographically, C neoformans may present as a pulmonary consolidation, reticulonodular opacity, or lung mass that mimics malignancy.6

In contrast, C immitis grows as a mold below the soil surface and is endemic to the southwestern United States. The mold releases spores that remain airborne for long periods of time. These spores may enter the lungs where they further divide into endospores that propagate infection.7 The risk of infection for those living in endemic areas is approximately 3% per year.8 C immitis typically causes severe pneumonia with cough and fever but may present as disseminated disease in immunocompromised hosts.7 Radiographic findings may include nodules, cavitary lesions, or peribronchial thickening with intrathoracic adenopathy.9

Treatment for C neoformans infection requires 200 mg/day to 400 mg/day of oral fluconazole for a minimum of 3 to 6 months in an immunocompetent host as well as in an immunocompromised host without central nervous system involvement.5 Treatment for C immitis is required in patients with disseminated disease such as meningitis or diffuse pulmonary disease, or those who are immunocompromised with CD4 cell counts of less than 250/mL.10 Fluconazole is the agent of choice for C immitis treatment although amphotericin may be considered if respiratory compromise is present. Treatment duration varies, but a minimum of 3 months is typically recommended.7

Fungal infections represent an important differential diagnosis for pulmonary nodules that may initially be suspected to represent malignancy. Furthermore, both C neoformans and C immitis may be positive on 18F-fluorodeoxyglucose-PET imaging due to increased metabolic activity and therefore be further mischaracterized as malignancy. A comprehensive patient history should be undertaken to rule out risk factors for pulmonary fungal infections, including immunocompromised state, area of residence, and lifestyle risk factors.

As fungal coinfections are exceedingly rare, identification of 1 organism may result in failure to fully investigate superimposed pathogens. In patients with more than 1 fungal pathogen, identification of each organism is essential for optimal management as eradication of multiple fungal species may necessitate changes to routine treatment regimens. With a trend toward high levels of steroid and antibiotic use in clinical practice, fungal coinfections may becomemore prevalent.