HCV can lead to cirrhosis, hepatocellular carcinoma, and end-stage liver disease if left untreated. In patients with HIV, the progression to cirrhosis is more rapid than in mono-infected patients.

In the United States, about one-quarter of HIV infected patients are also coinfected with HCV.

Across the world, patients with HIV are 6 times more likely to be infected with HCV than the general population. People who inject drugs are most likely to have coinfection, and in the United States, 50% to 90% of HIV-infected injection drug users are also coinfected with HCV.

All patients with HIV infection should be screened at least once for HCV. In patients with continued risk factors, such as intravenous (IV) drug use or men who have sex with men, HCV screening should be repeated.

Consequently, there are several treatment sensitivities that need to be taken into account when treating coinfected individuals.

The overall treatment response to interferon and ribavirin has been found to be low in HCV-mono-infected patients, and HIV coinfected patients have been shown to have an even lower response.

Well-tolerated and efficacious oral drug regimens now exist for the treatment of the general patient population with HCV, which now includes patients coinfected with HIV. With one exception, there is no difference in the efficacy of direct-acting antivirals (DAAs) in an HIV-coinfected or mono-infected patient, and the current guidelines recommend that HIV-infected patients be treated the same as noninfected patients.

When the decision is made to treat HCV, consideration must be given to drug interactions with HIV therapy. None of the currently available DAAs are free from drug interactions with HIV antiviral agents. Although some clinicians may choose to defer antiretroviral therapy (ART) until HCV therapy is completed, the US Department of Health and Human Services HIV guidelines recommend ART should be initiated in all HIV/HCV coinfected patients regardless of their CD4 cell count.

HIV therapy should not be withheld to facilitate easier treatment with DAAs; rather, the patient should be referred to an HIV specialist who can select an HIV regimen to accommodate HCV therapy by avoiding drug—drug interactions and toxicities. In general, most pharmacy benefit managers require patients to be on a stable HIV regimen prior to beginning HCV therapy.

Prior to August 2017, shortened regimens were not recommended for HCV treatment in coinfected patients. Ledipasvir/ sofosbuvir was not recommended to be shortened to 8 weeks, even if the patient was treatment-naïve and noncirrhotic and had a low-baseline HCV viral load.

Now, the recommendations include glecaprevir/pibrentasvir (GLE/PIB), a newly approved pangenotypic combination of an NS3/4A protease inhibitor and an NS5A inhibitor. It is administered as 3 tablets of GLE 100 mg/ PIB 40 mg once daily with food, and can be used for 8 weeks in select populations. In addition to having pangenotypic properties, GLE/PIB does not undergo renal excretion, allowing it to be used without dose adjustment in patients with chronic kidney disease and on dialysis.

In the EXPEDITION-2 trial to study GLE/ PIB, a total of 137 coinfected patients without cirrhosis received 8 weeks of GLE/PIB, while 16 patients with cirrhosis received 12 weeks of GLE/PIB. All the patients were treatment- naïve or previously treated with pegylated interferon/ribavirin with or without sofosbuvir. The treatment duration in the study is identical to current US Food and Drug Administration (FDA)—approved treatment durations and is the same for mono-infected patients.

The study results showed 99.3% sustained viral response for 12 or more weeks (SVR12) in patients receiving GLE/PIB for 8 weeks. This includes 1 patient who withdrew from the study due to an unrelated adverse effect. In patients with cirrhosis, all but 1 patient attained SVR12, although this was a small group of patients. None of the patients had HIV breakthrough. The combination of GLE/PIB was well tolerated, with none of the patients reporting an adverse effect related to the study drug. Efficacy was similar to other clinical trials that did not include the HIV-infected population. All ART agents used in the trial were free of drug interactions with GLE/ PIB. None of the patients were on protease inhibitor—boosted antivirals, in whom coadministration with GLE/PIB is not recommended.

Efavirenz should also be avoided with GLE/PIB due to the risk of decreased GLE/PIB levels. Of note, when using GLE/PIB with elvitegravir/cobicistat-based regimens, a dose adjustment is not required.

The current guidelines do not yet address the use of GLE/PIB; however, it is likely that this agent will be recommended for use in the HIV population.

Because 4 out of 5 of the first-line—recommended HIV regimens contain tenofovir, this interaction could affect a number of coinfected patients.

Through P-glycoprotein inhibition, levels of TDF could increase, potentially causing increased (stronger or more) adverse effects. This is more concerning in patients with preexisting renal impairment, even with a glomerular filtration rate of 60 mL/min.

No dose adjustment is required; however, it is necessary to monitor for TDF toxicity. In April 2016, the FDA approved the new formulation of tenofovir, tenofovir alafenamide (TAF), as part of the combination drug Descovy (emtricitabine/tenofovir alafenamide). TAF is a new oral prodrug of TDF, a nucleotide analogue that inhibits HIV-1 transcription. Unlike TDF, TAF is a more stable prodrug of tenofovir (TFV) in the plasma, which allows for high concentrations of TFV inside target cells. This reduces the plasma TFV exposures at approximately one-tenth the clinically approved dose of TDF.

Intracellular activation of TAF allows for higher concentrations inside target cells and a lower concentration of TFV in the plasma, reducing off-target toxicities such as renal and bone complications. TAF is much safer to use in patients with renal impairment as part of their nucelos(t)ide reverse transcriptase inhibitor (NRTI) backbone. This makes tenofovir one of the safest NRTIs, with minimal hepatic toxicity and few to no drug interactions with HCV drug regimens.

Highly active agents against HCV are available for HIV-infected individuals coinfected with HCV, including a new option allowing for an 8-week treatment duration in treatment-naïve patients without cirrhosis. Although there is no difference in efficacy in coinfected patients, the HIV-infected patient will still need special considerations regarding drug interactions when considering treatment for HCV infection. Consultation with HIV and HCV specialists is crucial when drug interactions exist. Fortunately, most of the commonly used HIV therapies do not have many drug interactions with HCV therapy. Five out of the 6 recommended first-line antiretroviral therapies are integrase strand transfer inhibitor-based regimens, which do not have any drug interactions with HCV therapy, with the exception of elvitegravir boosted cobicistat (See Table). Because HIV-infected patients remain a less-studied population in the treatment of HCV, despite the high risk for coinfection, more research should be done on medications with less potential for cross-reactivity. 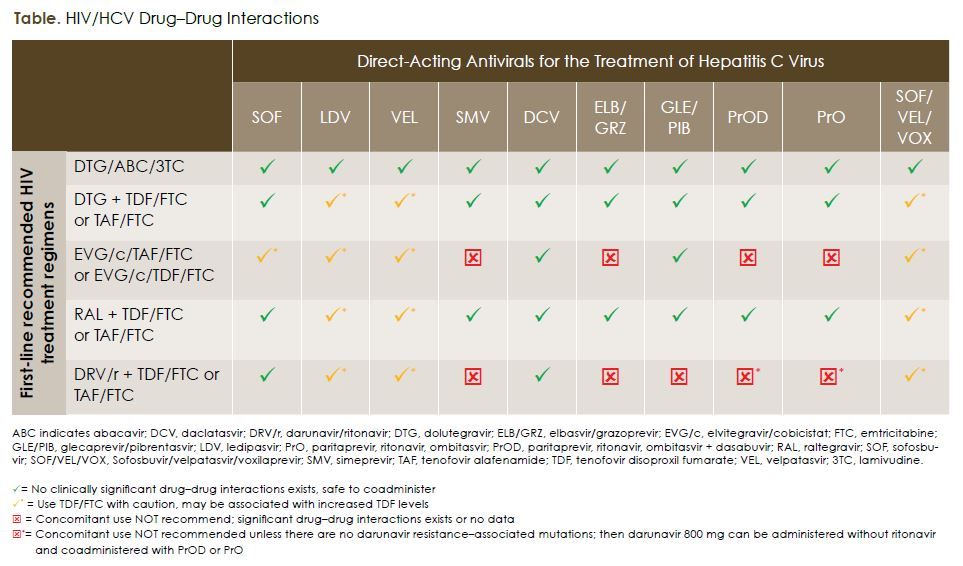 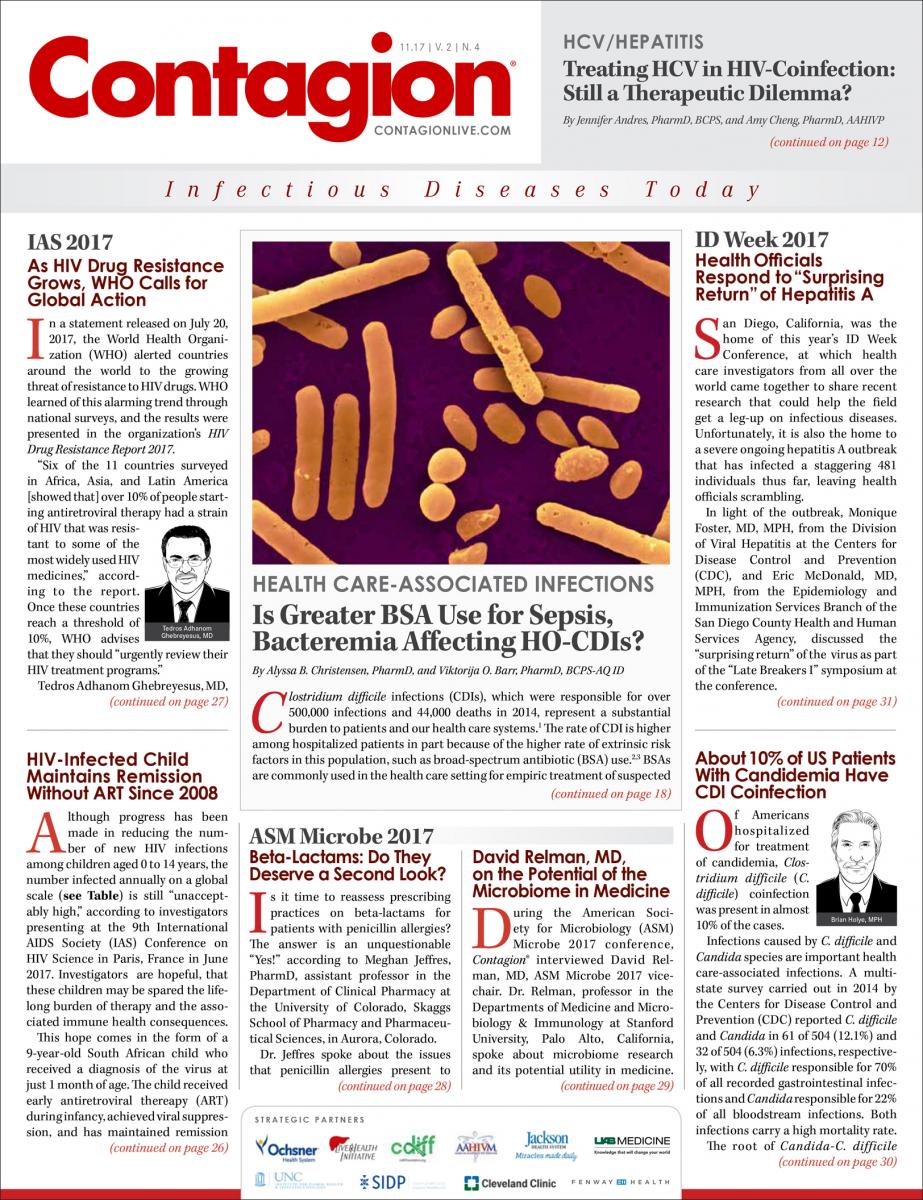 Improving Diagnosis of Lyme Disease: Laboratory and Clinical Approaches
The State of PrEP in 2017: Recent Data and Current Challenges
Is Greater BSA Use for Sepsis, Bacteremia Affecting HO-CDIs?
The Time for Antifungal Stewardship Programs Is Now
Keeping Up With Adult Vaccinations
Reassessing Practices Is Critical During an Infectious Disease Outbreak
Exploring the Threat of MDR-TB in the United States
Metabolic Syndrome's Link to Liver Fibrosis in Patients With HIV
Treating HCV in HIV-Coinfection: Still a Therapeutic Dilemma?
New Biosecurity Threats Appear in Less Familiar Forms
Related Videos
Related Content