Keeping Up With Adult Vaccinations

Adult vaccination updates have always been an annual occurrence, with many anxiously awaiting updates from the Centers for Disease Control and Prevention (CDC) and the Advisory Committee on Immunization Practices (ACIP). More frequently, however, as new vaccines become available, an increase in emerging data and more complex recommendations lead to provider confusion. Registration and follow-up studies of these new products or formulations have provided important insight into vaccine effectiveness and decision making based on high-risk populations. Additionally, local and national outbreaks have driven more awareness in health care professionals and the lay public about the importance of protection. Ultimately, many still depend on the specific guidance from the ACIP and/or the CDC for vaccine recommendations. In the interest of brevity, the focus here will be on updated adult immunization recommendations for meningococcal disease, influenza, and pneumococcal disease, including some details of the data as support.

The general adult vaccination schedule with a special population supplement is published each year in February (Table 1).1 (The special population and notable comorbidities are detailed in Table 2.) This past February, notable changes included the removal of live activated influenza vaccine as an influenza vaccine option for any population and removal of egg allergy as a contraindication for influenza vaccination. Meningococcal polysaccharide diphtheria toxoid conjugate vaccine subtype ACWY vaccination is now recommended for patients with HIV infection. One of the newer meningococcal subtype B vaccines is now recommended for either anatomical or functional asplenia or persistent complement component deficiencies, including those receiving eculizumab.

To update the annual table, meetings are convened in June and October of each year. A notable session was held this past June, focusing on meningococcal vaccination and highlighting more reportable disease in recent years, newer product availability, the withdrawal of a product, and new published data.

The CDC reported in 2015 that the rate of reported meningococcal disease in the United States was 370 (0.11/100,000), with 60 deaths (0.02/100,000).2 One concerning trend since that time has been the increase in meningococcal subtype B infections and associated mortality. Two new subtype B vaccines have become available in recent years, one a combination of Neisserial adhesin A (NadA), Neisserial heparin binding antigen, and factor H binding protein (fHBP) MenB-4C (Bexsero) and the other a combination of two lipidated fHBP variants, one subfamily A and one from subfamily B named MenB-FHbp (Trumenba) (Table 3). The quadrivalent serotype A, C, Y, W vaccines were available as conjugate or polysaccharide vaccines similar to pneumococcal formulations; however, the polysaccharide vaccine MPSV4 (Menomune) has been withdrawn from the market, given shorter immunogenicity and lesser vaccine effectiveness versus one of the conjugated meningococcal vaccines (groups A, C, Y and W-135), eg, Menactra.

Many providers remain confused because the label for Menomune states that it is the only vaccine with proven efficacy for prevention of disease in patients over 55. This issue was discussed at the June 2017 ACIP Advisory Board meeting, and thus the MenACWY conjugate vaccine is now recommended by the ACIP for all adult age groups.3 Additionally, the ACIP recommended booster doses of MenACWY every 5 years throughout life for high-risk persons. For the MenB vaccine, the ACIP noted the same recommendations for boosters every 5 years.

Quadrivalent meningococcal B vaccines are recommended for higher-risk individuals who work in microbiology labs, those with asplenia (functional or otherwise), those with complement deficiencies, and those undergoing therapy with Soliris, given its effect on the complement system. Newer data have emerged that suggest that the protection of the vaccine for both MenACWY and MenB currently in this population is not fully effective.4 This was based on reports to the US Food and Drug Administration (FDA) of 16 cases of meningococcal infection after vaccination from 2007-2014, including 1 fatal instance. The recent death was of a 16-year-old girl who had received both vaccines prior to therapy but developed nongroupable infection 6 months after the last vaccine and a week after her first dose of eculizumab. A discussion of possible antibiotic prophylaxis with penicillin has been ongoing at the CDC. For pneumococcal disease, the 2015 rate of reported invasive disease was 29,500 cases (9.2/100,000), with 3350 fatalities (1.04/100,000).5 Recommendations for the use of the pneumococcal conjugate 13-valent vaccine (PCV13) and the polysaccharide 23-valent vaccine (PPSV23) were last updated in 2015. The complex decision-making algorithm for vaccine administration and timing is noted in Table 4. A recent study6 examined longer-term immunogenicity in immunocompetent patients 65 and older by measuring serial PCV13 serotype-specific opsonophagocytic activity titers and immunoglobulin G concentrations at 1 month, 12 months, and 24 months post immunization. A placebo comparison was able to be designed because the study was conducted in the Netherlands, where there is no mandate for PCV13 vaccination. Geometric mean titers were sustainably higher in the treatment group. A post hoc subgroup analysis demonstrated that in patients over 80, the titer response waned, bringing into question the relative influenza vaccine effectiveness (VE) with advanced age. Until that is determined, only a single dose is recommended for those over 65 currently. 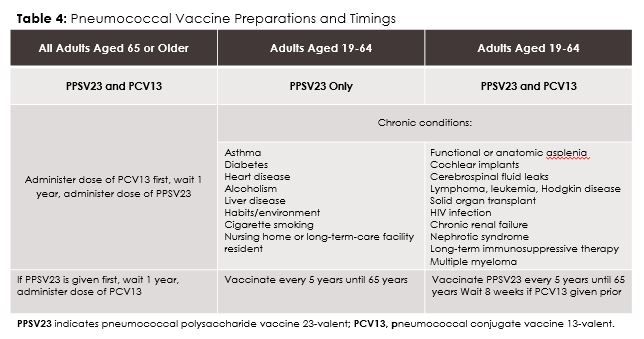 For influenza, the rate of reported positive influenza swabs for the 2016-2017 season was 130,500, with the number of visits for influenza-like illness at 278,706 and reported mortality at 9788 cases.7 The majority of 2016 isolates were classified as H3N2. The recommendations for the 2017-2018 influenza season were just released at the end of this past August.8 The recommendations for vaccination of the entire population over 6 months unless contraindicated remain in place.

Regarding the choice of vaccine, the live attenuated vaccine is again not recommended because of concerns regarding effectiveness. This was supported by follow-up studies identifying lowered hemagglutinin activity of the attenuated strain from 2013-2014, leading to a lower replicative capacity and a subsequently lower immunogenic response to produce antibodies. Investigators are actively studying newer formulation strains so that the live product may become a viable alternative again. Trivalent and quadrivalent vaccines remain in equipoise, while standard dose (SD) versus high dose (HD) in select elderly patients is still a matter of ongoing debate. The prevailing public health goal is to improve vaccination rates, particularly in younger adults at higher risk.

According to the annual review by the ACIP regarding these vaccines, the overall VE across all strains of influenza vaccine for all ages was 48%. This was largely driven by lower effectiveness of the egg-based vaccine for H3N2. Administration of the higher-dose recombinant vaccine (RIV4), however, was found to result in an improved relative efficacy (compared with active comparator vaccine) against influenza A of 36% (95% CI, 14%-53%) (hazard ratio [HR], 0.64; 95% CI, 0.48- 0.86; P = .003) but no difference with respect to influenza B. Recombinant vaccine also contains no egg by-products, reducing the likelihood of a reaction in patients with a history of a truly severe egg allergy.Relative to specific effectiveness in the population over 65 years, there continues to be potential evidence that a higher dose can overcome immunologic senescence. The results of the most recent study of nursing home residents—a comparative- effectiveness, cluster-randomized trial from 823 centers given either the HD or SD vaccine during the 2013-2014 predominantly A/H1N1 influenza season&mdash;showed a reduction of respiratory-related hospital admissions of 0.5%, with an adjusted relative risk of 0.87, (95% CI, 0.78-0.98, P = .023).9 There were no laboratory data to confirm influenza, however. As a result, patient and provider preferences are the only deciding factors between low and high dose in elderly individuals.

As stated previously, the adult vaccine landscape remains ever changing, with an annual schedule recommendation in February plus interim recommendations for influenza in August of each year in addition to individual product updates as needed. To remain the most updated, review the ACIP’s excellent website and listserv resources, as well as releases from Morbidity and Mortality Weekly Report and other major publications on vaccine effectiveness, as study results evolve.

Dr. McCoy is the associate director of the Antimicrobial Stewardship Program at Beth Israel Deaconess Medical Center in Boston, MA, as well as the PGY-2 program director for the Infectious Diseases Residency. He received a PharmD from Massachusetts College of Pharmacy in Boston. Dr. McCoy is board certified in pharmacotherapy (BCPS) with added qualifications in infectious diseases. He is an active member of SIDP.