Exploring the Threat of MDR-TB in the United States

The virulent pathogen has significant individual and public health implications.

Tuberculosis (TB) has been labeled as one of the deadliest infectious diseases to humankind. Advances in Mycobacterium tuberculosis (MTB) research, coupled with the discovery of the antituberculous medications isoniazid and the rifamycins, propelled multiple international efforts to control TB that drastically changed the disease landscape.1 Yet, per the World Health Organization (WHO), 10.4 million TB cases occurred in 2015, ranking the infection among the top 10 causes of death worldwide.2

A major threat to global TB control is drug-resistant disease. Treatment for drug-sensitive TB involves prolonged combination therapy—usually at least 6 months of multidrug treatment&mdash;because of MTB’s inherent ability to evade host defense mechanisms.3 Inadequate treatment (eg, from inappropriate drug administration or nonadherence) may lead to resistance. Additionally, resistant TB strains may infect and cause disease in individuals not previously exposed to antituberculous therapy. Accordingly, the WHO, with support from the International Union Against Tuberculosis and Lung Disease, established the Global Project on Anti-Tuberculosis Drug Resistance Surveillance, the oldest and largest initiative of antimicrobial resistance surveillance in the world.4

The most serious forms of drug-resistant TB include rifampin-resistant TB (RR-TB), multidrug-resistant TB (MDR-TB), and extensively drug-resistant TB (XDR-TB). MDR-TB is defined as TB with resistance to at least isoniazid and rifampin, the most effective anti-TB drugs.5 XDR-TB is defined as MDR-TB also resistant to any fluoroquinolone and at least 1 injectable agent.5 MDR- and RR-TB account for about 3.9% of new TB cases and 21% of previously treated cases, totaling 580,000 incident cases and 250,000 deaths per year.2 Areas of Eastern Europe and Central Asia, however, remain locations of MDR-TB epidemics, with incidence rates reaching 34%.4 Furthermore, the true global burden is likely underestimated, given underreporting, lack of universal resistance testing, and undiagnosed TB disease, especially in areas with geographic or financial barriers to care.2,6

DISEASE BURDEN IN THE UNITED STATES

In the United States, 9287 cases of TB were reported in 2016, contributing to an incidence rate of 2.9 cases per 100,000 persons.7 Seemingly reassuring, the small magnitude of incidence decline from the prior year predicts that national elimination of TB will not occur during this century.7

Demographically, roughly two-thirds of TB cases occurred in foreign-born individuals, with the highest incidence in Asians (26.9 cases per 100,000).7 California, Florida, New York, and Texas accounted for over 50% of cases.7 A source case study of national TB cases between 2011 and 2014 indicated that the vast majority were presumably due to reactivation of latent TB infection.8

Fortunately, MDR-TB remains relatively rare in the United States. The most recent MDR-TB data, from 2015, include 88 cases, representing about 1% of persons with TB disease.9,10 Eighty-five percent were foreign-born persons, and nearly 82% were individuals without a history of TB disease.7,9 These statistics emphasize how global control will undoubtedly affect progress toward national TB elimination.

MDR-TB requires extended courses of medications that are more expensive, less effective, and often more toxic than first-line treatment for drug-sensitive TB, thereby imposing a significant financial burden on patients and health care systems. Marks and colleagues analyzed costs of treatment for MDR and XDR-TB in high-risk areas of the United States from 2005 to 2007.11 Treatment duration ranged from 20 to 32.3 months, depending on resistance profiles, and 73% of patients were hospitalized at least once during their treatment. Average direct costs were $134,000 per MDR-TB patient and $430,000 per XDR-TB patient; direct-plus-productivity-loss costs averaged $260,000 to $554,000. The extrapolated total direct-plus-productivity- loss costs to the US health care system were approximately $100 million. A follow-up study indicated that 98 of 135 MDR-TB patients were hospitalized during treatment, averaging 1.5 hospitalization episodes per patient and an average duration of 94 days.12 The most common reasons for hospitalization were severe worsening of TB and the need to initiate or change treatment regimens. Risk factors for more frequent hospitalization included being age 65 years or older, having AIDS, and having private insurance. The average cost per hospitalization was $54,883 for MDR-TB and $191,374 for XDR-TB— among the highest for any disease in the United States.

Drug-resistant TB is diagnosed by identifying MTB and then performing drug-susceptibility testing (DST).13 DST is often limited to state or other specialized laboratories, and final test results may be delayed by up to several weeks. Recent data suggest that despite improvements, incomplete and/or delayed DST results persist in the United States.14

Also concerning is reduced disease suspicion due to unfamiliarity of US health care providers with TB, leading to delayed or missed diagnoses and health care worker exposure. A study of pulmonary TB in New York, New York, from 2010 to 2014 sought to capture and quantify this risk.15 The average time between admission and placement on airborne isolation was 3.3 days, and the average time between admission and diagnosis was 5.1 days. This led to an average of 41 staff members’ requiring exposure-related follow-up per patient and nearly 40 hours of infection control workload.

The WHO estimates a global treatment success rate (defined as the sum of cure and treatment completion) of 52% in MDR- and RR-TB patients, compared with 85% for drug-susceptible disease.2 Outcomes from an aforementioned study in the United States reported an MDR-TB treatment completion rate of 78% (n = 134), with no failures or recurrences within 1 year.11 Twelve (9%) deaths occurred during treatment, of which 75% were attributable to TB. Death was associated with an age range of 65 years and above, smoking, and HIV infection.

Medication accessibility and drug toxicity are other key safety outcomes. A 2010 survey indicated 81% of health departments reported difficulty obtaining second-line agents for MDR-TB.16 In a report from 5 international WHO sites, 30% of patients required cessation of a suspected drug(s) because of toxicity, and 2.1% stopped treatment entirely because of adverse effects.17 The Centers for Disease Control and Prevention reports that 19% of patients treated for drug-resistant TB in the United States experience depression or psychosis, 13% develop hearing impairment or hepatitis, and 11% experience kidney injury.18 Recently, shorter-course regimens have been introduced, with improved treatment success rates and associated safety profiles.19,20 Though a complete review of treatment exceeds the scope of this review, the WHO MDR-TB guidelines and common medication toxicities are summarized in Tables 1 and 2.

Prevention strategies are key to minimizing and eliminating the transmission of both drug-sensitive and drug-resistant TB. US public health departments are tasked with TB control, particularly to ensure prompt diagnosis and completion of appropriate treatment. Programs also provide transportation and childcare assistance, food and housing incentives, directly observed therapy, and alternative treatment delivery sites to optimize treatment success.21 In December 2015, the National Action Plan for Combating Multidrug-Resistant Tuberculosis was released to identify targeted interventions and address domestic and global challenges associated with resistant TB.22 The plan outlines 3 broad goals to combat MDR-TB, including (1) strengthening domestic capacity, (2) improving international capacity and collaboration, and (3) accelerating basic and applied research and development.22 This intervention solidified the investment and coordination of government resources for this important cause. 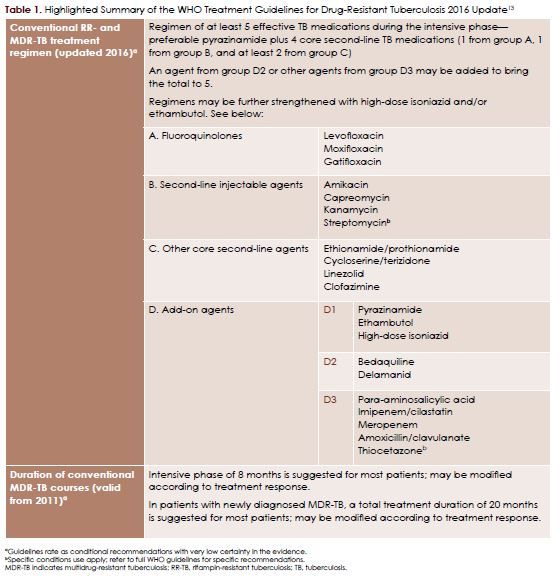 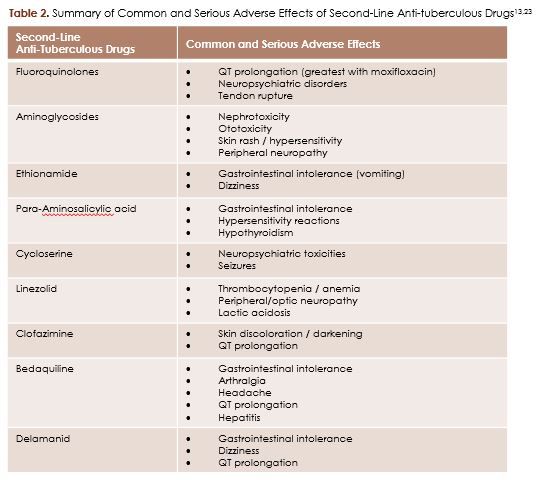