Finding the source of infectious disease transmission can be difficult. One tiny interaction can result in the spread of disease between 2 people or even 2 species. Finding that exact moment of transmission is often like looking for a needle in a haystack. These interactions can be brief, but they may hold the key to how diseases are transmitted, which can prevention and response efforts in the future.

A new study by investigators at the University of California—Santa Cruz set out to find out more about this moment by evaluating disease transmission in bats frequently impacted by the fungal infection, white-nose syndrome. This infection can devastate bat populations and the investigators were hoping to understand the under-the-radar (pun intended) connections between bats that might facilitate the spread of the disease.

For the study, the investigators dusted bats with a fluorescent powder that glowed under ultraviolet light to track “cryptic connections.” They evaluated 8 bat hibernation sites in the upper Midwest (fun fact: abandoned mine tunnels are prime bat spots!) in which they found up to 4 different bat species. Prior to “dusting” the bats with the powder, the team observed the bats’ social networks and measured direct physical contacts between bats that were hibernating together in groups, as well as contact between those bats that moved between groups. 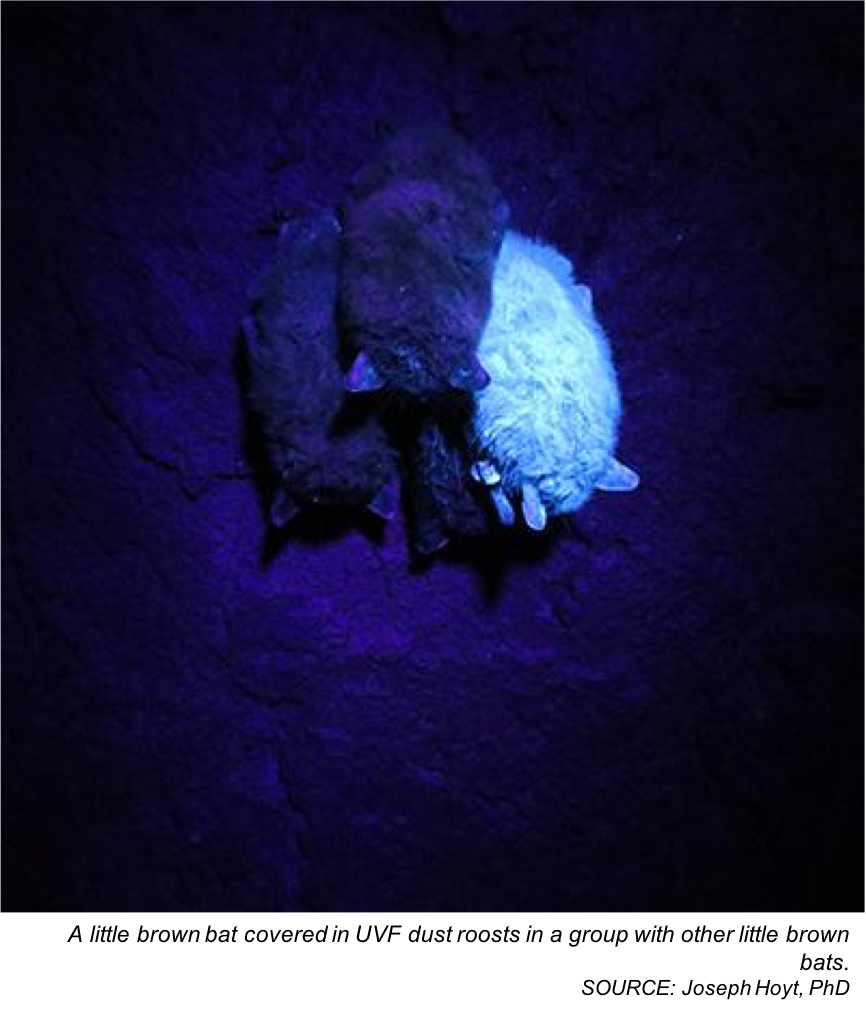 The fluorescent powder was applied in early winter (a different color for each individual) and then assessed in late winter to identify the places the dust was found. The dust was meant to represent the white-nose syndrome fungus to help the investigators understand how it is passed around bat groups.

The investigators found, “the actual transmission dynamics of the disease were better explained by the sum of all the connections revealed in the dust studies than by just using the social networks seen in hibernation groups." This means that the dust study allowed them to explain the movement of the white-nose syndrome fungus better once it arrived into the bat groups. This is especially helpful as the fungal infection is unique in its ability to be transmitted during the winter when the bats are hibernating.

Study lead investigator Joseph Hoyt, PhD, noted that, “these results uncovered connections both within and among species that we never knew about before.” Dr. Hoyt and colleagues described these interactions as similar to the brief interactions humans have on a daily basis, such as with the barista at a local coffee shop, between coworkers in the same office, with a doorknob touched by many people, etc. All these interactions, no matter how brief they may be, play a role in disease transmission.

As such, this study is not just relevant for disease transmission between animal species; it also has implications for spillover events in which pathogens spread from animals to humans. Spillover events are often cryptic connections that can have devastating consequences. For example, in this study, the investigators found that the northern long-eared bats—which tend to be loners and not roost in groups&mdash;were severely impacted when the white-nose syndrome fungus arrived in their population. One would think that bats that roost by themselves would be less likely to be infected; however, the dust study found that despite the observations on their solitary nature, this bat actually interacted with a lot of other bats. These hidden connections provide valuable lessons about the dynamics of disease transmission. Despite what we may observe in certain moments, there are many moments we miss that play critical roles in disease transmission. As an epidemiologist, this is an overdue reminder that we should always go beyond what we see and assess interactions that may seem obvious or well-established.