DEC 13, 2018 | MICHAELA FLEMING
Haemaphysalis longicornis, also called the Asian longhorned tick, is the first invasive tick to emerge in the United States in approximately 80 years. The tick has been classified as a new emerging disease threat by the US Centers for Disease Control and Prevention, and now a new study has found that the Asian longhorned tick could survive in the majority of the eastern United States and the coastal Pacific Northwest.

In the study, published today in the Journal of Medical Entomology, Ilia Rochlin, PhD, an entomologist associated with the Rutgers University Center for Vector Biology, analyzed variables such as average annual rainfall and temperature from 260 locations in Asia and Australia where the tick has been previously reported, and then developed a model that would combine this data with climate data from North America to determine suitable habitats for the tick.

“The Asian longhorned tick will most likely become established in many areas of temperate United States and southern Canada,” Dr. Rochlin told Contagion® in an interview, “[W]e know that this tick species readily feeds on humans, pets, and wildlife. All these aspects increase the likelihood that the Asian longhorned tick may become a vector species transmitting some of the numerous tick-borne pathogens already circulating over much of eastern North America.”

The study results indicated that suitable areas for habitation in North America include coastal areas from eastern Canada, such as New Brunswick and Nova Scotia; down south to Virginia and North Carolina; and from southern British Columbia to northern parts of California on the west coast. The report also notes that suitable habitats were detected through inland North America from northern Louisiana to Wisconsin and into southern Ontario and Quebec, as well as Kentucky, Tennessee, and Missouri (see image). 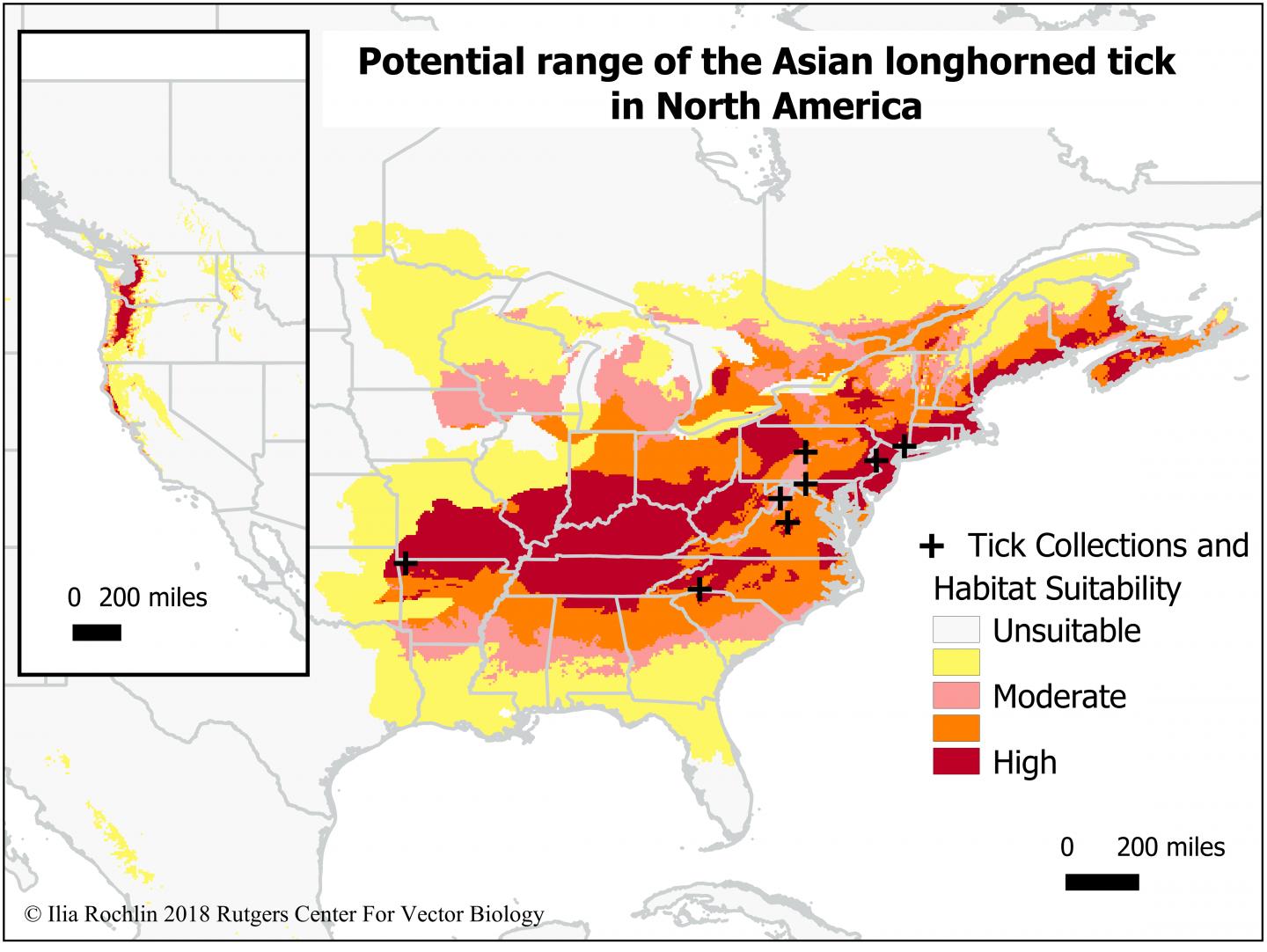 Other parts of North America were excluded due to warmer temperatures, cold winters, or dry terrain.

While little is currently known about the biology of the tick, the vector has been known to transmit a number of serious infections to both humans and animals in Asia and Australia.

Although there have been no reports of Asian longhorned tick-to-human transmission of disease in the United States so far, Dr. Rochlin said that it is critical to learn more about this tick and its capabilities.

“Clinicians across the potential range of the Asian longhorned tick should… be on a lookout for unusual patterns of existing tick-borne diseases, or the emergence of new tick-borne pathogen[s],” Dr. Rochlin advised.

Surveillance is imperative. One of the most important ways to stop the tick from transmitting dangerous infections to humans and animals is to practice tick surveillance.

“[W]e are in dire need of comprehensive tick control strategy and new tools to carry it out, from decision-making software to environmentally friendly acaricides to effective methods for host control,” Dr. Rochlin concluded.
To stay informed on the latest in infectious disease news and developments, please sign up for our weekly newsletter.