2019: Measles Outbreaks in the United States

AUG 08, 2019 | MATTHEW ZAHN, MD
The United States has seen numerous measles outbreaks since endemic disease was declared eliminated in North America in 2000. Still, this year feels different. More cases have been reported in the country so far this year than in any year since 1992.1 This is partially due to international epidemiology. Measles remains endemic in much of the world, and large international outbreaks, particularly in the Philippines, Israel, and Ukraine, have led to more travel-related disease.2

The virus also is being introduced frequently into communities around the country: As of June 13, 28 states have reported cases this year. These national case counts are invariably driven by large outbreaks in communi­ties with low immunization rates. Of 1044 cases reported through June 13, just under 90% are related to 3 outbreaks in New York City; Rockland County, New York; and Clark County, Washington.1

With more outbreaks and increased media interest in measles, medical providers are getting more ques­tions about the disease. Providers need to know when it is appropriate to consider and test for measles and be familiar with the basics of conducting health care contact investigations when a case is identified.

WHEN TO SUSPECT MEASLES
A patient’s exposure and travel history are vital to a measles assessment. In communities not experiencing an outbreak, testing should primarily be considered in patients with a known exposure risk, such as travel outside of North America, transit through US international airports, or interaction with foreign visitors, including at a US tourist attraction.

Measles symptoms begin after an incubation period of 7 to 21 (usually 8-12) days. A prodrome with some combination of fever, cough, nonpurulent conjunctivitis, and coryza is followed in 3 to 6 days by a descending maculopapular rash. Koplik spots, white macular 1-mm lesions on the buccal mucosa, appear 2 to 3 days into the prodrome. They generally are fading or are gone by the time rash develops. Testing is rarely indicated in patients with either no rash or a rash that does not begin on the scalp or face, as well as in patients who present just with rash and no prodrome.

DIAGNOSIS
Initial testing should include measles polymerase chain reaction (PCR) of a throat swab (Table 1).3 Other respira­tory specimens, including nasopharyngeal, may also be used. Urine PCR can be added to respiratory PCR testing to increase sensitivity. Most PCR testing is performed in public health laboratories. Community PCR testing capacity that is readily accessible is vital to initiating a prompt exposure response. 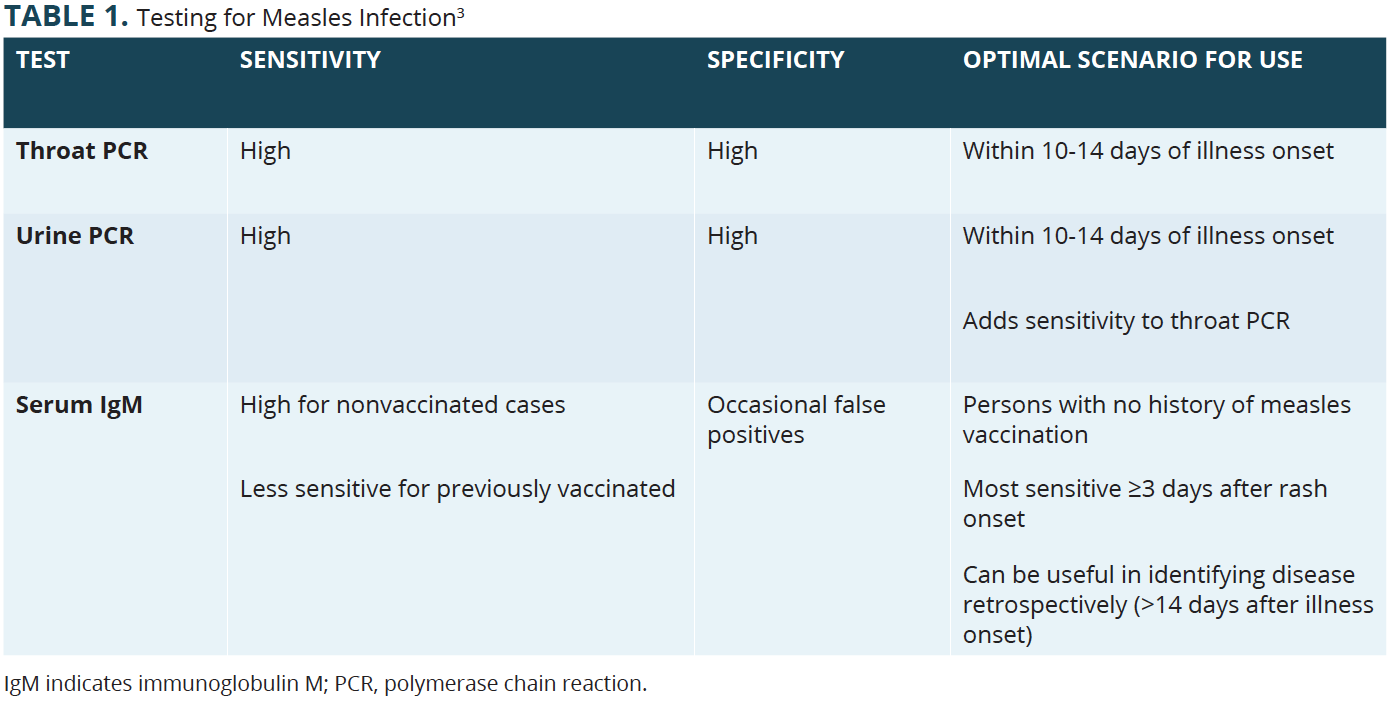 Measles serum immunoglobulin M testing is useful in suspected disease for persons who have not been vacci­nated, but it has relatively poor sensitivity in persons with a history of immunization.4

MEASLES VACCINATION
Measles, mumps, and rubella (MMR) vaccination is recom­mended for all children at 12 to 15 months and then again at 4 to 6 years. Two doses are about 97% effective at preventing measles. The second dose is not a booster; it provides coverage for the approximately 7% of persons who were not protected by the first dose. Although community epidemiology rarely mandates it, patients may receive the second dose anytime 4 weeks or more after the first dose, and there is no downside to series acceleration. Protection lasts for decades, and there is no recommendation for adult “booster dosing.”

Adults in the general population who are not at high risk for measles but who do not have documentation may be concerned they are not immune. There is minimal risk to receiving a third MMR dose. But in general, persons born before 1957 were likely exposed to wild-type measles and are thus immune. Most adults born in 1957 or later who grew up in the United States and believe that they received their routine pediatric immu­nizations probably did receive at least 1 measles-containing vaccine and do not need an additional dose. Adult populations who should have 2 documented doses of measles-containing vaccine or serologic proof of immunity include health care workers and international travelers.

As in past years, some cases have been identified in persons with a history of 2 MMR doses or serologic evidence of immu­nity. Such cases have the same constella­tion of prodromal symptoms, followed by a descending rash. The prodrome is frequently milder, the rash may be less impressive, and the patients tend to be less ill and less infec­tious. However, the postexposure recommen­dations remain the same for these cases, and the contact investigations are just as onerous.

PUBLIC HEALTH RESPONSE
Every measles case is a sentinel event for state and local public health depart­ments. With the increase in imported cases, health departments around the country are becoming experienced responding to these events. In most cases, an effective public health response will be time and labor intensive.

Patients are considered infectious from 4 days before until 4 days after the rash begins; those with cough are generally the most infectious. Because the virus is passed in an airborne fashion, any travel outside the home to enclosed spaces generates exposures, often leading to large contact investigations. The public health response has to balance the need to reach this large group with the most significant exposure are at highest risk. Community exposures in large public venues such as malls, movie theaters, or sporting events, tend to be low risk, unless known direct contact with the case occurs, and do not merit postexposure prophylaxis.

MEASLES INFECTION CONTROL IN HEALTH CARE SETTINGS
Patients with measles often have multiple medical visits before the disease is diagnosed, resulting in significant numbers of expo­sures in health care settings. Every person in a clinical setting is at risk once a measles case enters that setting until 2 hours after the case leaves or is placed in airborne isola­tion. Providers need to have a plan to safely see suspect cases in their clinic setting. Patients should be placed immediately in a negative pressure room if one is available. Other options include seeing the patient in a predetermined outdoor space outside the clinic building or at the end of the clinic day when other patients have left. Public health should be contacted immediately with any suspect case to begin a coordinated effort to identify potential contacts. Outreach in some form, either by phone or letter, is needed to reach exposed patients and their family and friends. The form of follow-up is often defined by response capacity and the number of persons exposed.

All exposed medical staff are also at risk, particularly those who have face-to-face contact with infected persons. Any health care staff who are exposed to measles must be proven to be immune (with a documented history of 2 MMR doses or serologic proof of immunity) or they should be excluded from work from the fifth day after their first expo­sure until 21 days after their last exposure. Breakthrough disease can occasionally occur in vaccinated persons, so medical staff who are known to be immune should still prac­tice airborne precautions (N95 masking) while seeing the patient. Even with docu­mented immunity, medical staff with known exposure should be made aware that they should stop working immediately and be tested for infection if prodromal-type symp­toms begin.

POSTEXPOSURE PROPHYLAXIS
Postexposure prophylaxis (PEP) for those without evidence of immunity can take the form of measles vaccine (within 72 hours of exposure) or immune globulin (IG) (within 6 days). Because IG is a limited resource, it is generally used to protect persons at partic­ular risk of serious disease, such as infants or immunocompromised persons, rather than to control outbreaks. Exposed infants younger than 12 months and severely immunocom­promised children who weigh less than 30 kg should receive 0.5 mL/kg of body weight of intramuscular IG.

Alternatively, infants aged 6 to 11 months may be given the MMR vaccine within 72 hours of exposure, although IG is preferred for this population. Exposed persons who are severely immunocompromised and weigh over 30 kg and pregnant women should receive intravenous IG at a dose of 400 mg/kg.5

VACCINE LEGISLATION
Recent outbreaks have spurred legislation regarding school exemptions in multiple states. New York, Maine, and Washington all passed bills in 2019 removing religious and/ or personal belief exemptions from public school immunization requirements. But the passage of such bills is not a simple matter. In most communities, a vocal antivacci­nation population oppose such measures. Success requires a legislative champion who recognizes the public health impor­tance of such measures and is willing to accept the potential political cost. Physician champions can often play an important role, acting as subject matter experts in a variety of community settings by speaking to the safety of vaccines and the impor­tance of protecting our loved ones from serious disease.

Zahn is a pediatric infectious disease physician. He serves as medical director for the Epidemiology and Assessment Program for the Orange County Health Care Agency in California. References:

MOST POPULAR ARTICLES
How Deadly Was the 2019-2020 Flu Season?
Why Comparing Flu and COVID-19 Severity Is Not Equivalent
The Sweden Question: Has Controversial Response Led to T-cell Mediated Immunity?
Looking at Asymptomatic Vs. Symptomatic COVID-19 Patients