HISTORY OF PRESENT ILLNESS
An 86-year old Caucasian female with a past medical history of gastroesophageal reflux disease (GERD) and recently treated Lyme disease was sent to the emergency department (ED) by her primary care physician for an acute presentation of partial-expressive aphasia, decreased grip strength, and diminished proprioception on the right side of her body that began 2 days earlier. Prior to the onset of symptoms, she was in a normal state of health and had been participating in regular activities, including yoga, without difficulty. She initially presented to an outside hospital ED with these acute neurologic changes. While she was being transferred to the accepting hospital, she suffered a seizure and was admitted to the neuro-intensive care unit for possible stroke evalua­tion. She was intubated and underwent initial brain imaging that revealed a left-sided frontal brain mass with vasogenic edema (Figure 1A-1D). She was started on prophylactic antiepileptics and steroids, and the neurosurgical team was consulted.

PAST MEDICAL HISTORY
Lyme disease was diagnosed 2 months prior to admission. At that time, the patient presented with diffuse myalgias that improved after treatment with a 28-day course of doxycy­cline. Titers at the time showed reactivity to more than 5 IgG borrelial proteins. She had a remote history of treated malaria and medical history of GERD and right foot surgery.

KEY MEDICATIONS
The patient was on no medications at the time of admission.

EPIDEMIOLOGICAL HISTORY
The patient has an extensive travel history. She has spent significant time in South America and lived over 20 years in Swaziland, Africa, with her late husband doing medical missionary work. She has no recent travel aside from spending time in Lancaster, Pennsylvania. She has no pets and lives with her 2 daughters.

PHYSICAL EXAM
On admission, the patient’s vital signs were within normal limits. She was alert and oriented. On neurological exam, she was found to have decreased speech fluency with paraphasic error as well as subtle compressive errors. She also had mildly decreased right-handed grip strength. Her reflexes were brisk, with an equivocal right plantar response. She was also found to have decreased joint position in her right toe and extinction to the right side.

CLINICAL COURSE
The patient underwent a left-sided frontal craniotomy with excision of the brain lesion. After surgery, her aphasia and right-sided grip strength greatly improved. She was discharged to rehab several days later awaiting biopsy results. Cultures were not sent at the time of biopsy; however, pathology from the lesion revealed gram-positive filamentous rods. A week later, the patient returned to the hospital with a fever of 101°F (38.3°C), white blood cell count of 21.4, diffuse weakness, and worsening aphasia. Repeat imagining noted fluid-filled cavity with a small amount of gas (Figures 2A-2B). She was taken by neuro­surgery to the operating room (OR). 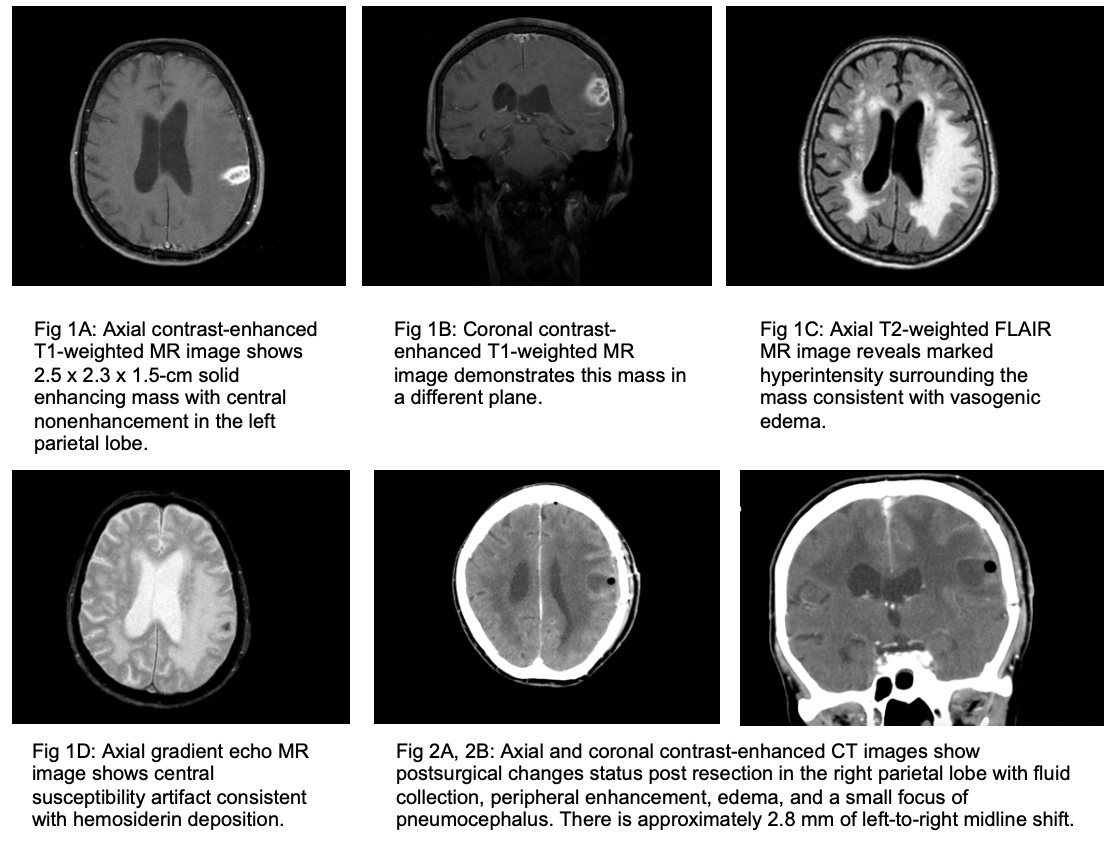 DIAGNOSTIC PROCEDURES AND RESULTS
In the OR, a purulent brain abscess was drained. The patient was started empirically on imipenem and intravenous (IV) trimethoprim-sulfamethox­azole (TMP-SMX), given the previous pathology note showing gram-positive filamentous rods, and additional cultures were obtained. The abscess wound cultures finalized as N farcinica.

TREATMENT AND FOLLOW-UP
Antibiotics were continued through a periph­erally inserted central catheter (PICC) line. Her hospital course was complicated by hypo­natremia, for which the D5W volume in the TMP-SMX was restricted to 150 mL. The patient was eventually discharged to rehab with near complete resolution of aphasia. She presented to the hospital a few days later with increased weakness, decreased appetite, and worsening aphasia. Repeat imaging at the time showed decreased size of the brain lesion and a resolu­tion of the previously noted left-to-right brain shift. Nocardia susceptibility testing took place at that time, and due to resistance, the imipenem was switched to linezolid (Table). 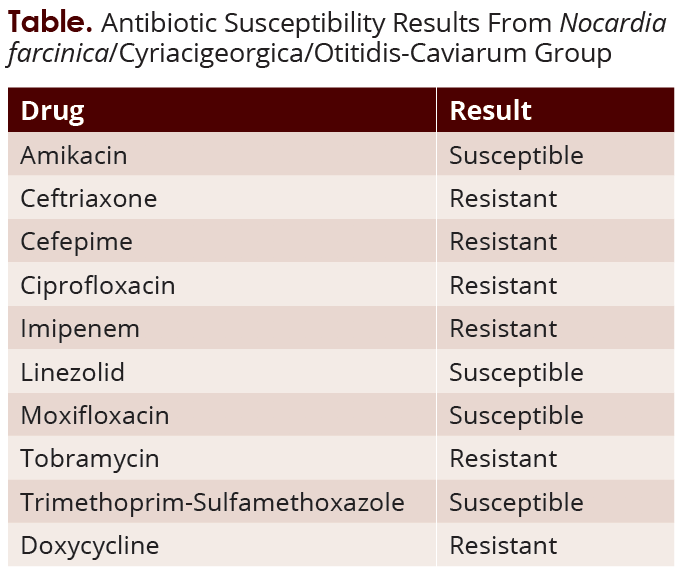 The patient was initially started on empiric imipenem and TMP-SMX and then switched to linezolid and TMP-SMX following susceptibility results. She had several readmissions for recur­rence of symptoms and for PICC line malfunc­tion. Throughout the course of treatment, she experienced hyponatremia, hyperkalemia, vague depressive features, acute kidney injury, and adrenal insufficiency. Linezolid was later discontinued due to thrombocytopenia, and IV TMP-SMX was transitioned to oral, with a plan to continue for 12 months.

DISCUSSION
Nocardiosis is caused by gram-positive, partially acid-fast, branching bacilli.1 There are several Nocardia species, with N asteroides and Nippo-strongylus brasiliensis most commonly causing pathology in humans. N asteroides is responsible for the majority of infections. Other Nocardia species are implicated in the remaining 9% to 19% of cases.2 N farcinica is one of the more rare causes of nocardiosis.3 Its prevalence varies geographically but is somewhat hard to classify given underre­porting.4 Additionally, N farcinica is more virulent, more likely to disseminate, and more resistant to antibiotics, making mortality rates high.3,4 In this case, we report on cerebral nocardiosis in a female immunocompetent elderly patient.

Infection with Nocardia occurs through direct contact with soil, causing cutaneous nocardiosis, or through inhalation of the bacterium, causing pulmonary infection.1 It is found throughout the world and has a male to female ratio of 3:1.5 There are 500 to 1000 new cases of Nocardia infection each year in the United States.5 Patients typically present with primary pulmonary mani­festations, including cough, chest pain, shortness of breath, and weakness. Those at higher risk for infection include individuals with primary underlying pulmonary disease and individuals who are immunocompromised (ie, malignancy, transplant recipients, HIV co-infection, gluco­corticoid usage). Disseminated infection occurs locally or hematogenously.1 The skin and brain are the most common sites of extrapulmonary disease.5 Untreated Nocardia infection can spread to the central nervous system (CNS), with a subse­quent mortality rate of 44% to 55%.5,6 A solitary CNS abscess accounts for the most common CNS presentation, and Nocardia accounts for 1% to 2% of all brain abscesses.7 Abscess formation typically occurs through hematogenous spread, trauma, neurosurgical instrumentation, or sinus infection.8 The mortality for Nocardia brain abscess is 3 times higher than for other bacte­rial causes of brain abscess.6 Given the relative rarity of Nocardia causing a brain abscess, it is not highly suspect, and lack of coverage with empiric antibiotics may delay treatment and worsen outcomes.

Because of the range of potential pathogens, treatment for brain abscesses covers broad-spec­trum pathogens. Treatment in immunocompro­mised patients should be extended to include voriconazole and TMP-SMX to cover fungi, yeasts, and toxoplasmosis.8 Antimicrobials used in the treatment of nocardiosis include combinations of imipenem, moxifloxacin, amikacin, linezolid, minocycline, ciprofloxacin, and TMP-SMX.3 TMP-SMX is the most common antimicrobial used for Nocardia infection, and treatment usually lasts 6 to 12 months. Treatment of N farcinica provides additional challenges as it can be more aggressive, especially in immunocompromised people, and is known to be more resistant to antimicrobials.3,9 Surgical excision and drainage for abscesses greater than 2.5 cm are recommended.10 Steroid usage is controversial because although it may help decrease edema around the mass and neuro­logical sequelae, it may also worsen healing and infection resolution.10 The treatment of choice for brain abscesses is surgical drainage followed by an extended course of antimicrobials.

Although CNS involvement is a relatively common presentation of nocardiosis, particularly in immunocompromised hosts, primary CNS infection in immunocompetent individuals is less common and may resemble primary neurologic pathology, including brain malignancy.11 As immune response decreases with age, this patient’s advanced age— despite her excellent health—likely made her more susceptible to disseminated infection. There have been case reports that have demonstrated the unique presentation of primary CNS Nocardia infec­tion in immunocompetent patients.9 In a survey of reported cases of nocardiosis, up to 15% of docu­mented cases were found in immunocompetent individuals.2 Examples have highlighted Nocardia brain abscesses presenting as presumptive CNS malignancy, stroke, and seizure.12,13 Although the prognosis for brain abscesses has improved over time, longtime neurologic sequelae, including focal deficits and seizure, are found in 20% to 79% of survivors.10 Factors that worsen prognosis include extremes of age, multiple lesions, deep lesions, fungal etiology, and how quickly diagnosis occurs and antimicrobials are started.10

Although Nocardia should be considered in patients with predisposing features and immu­nocompromised states who present with a brain lesion, its quick recognition in both immunocompro­mised and immunocompetent hosts is key to early initiation of treatment and long-term survival.

Schiff is a second-year resident in the Department of Internal Medicine at Drexel University College of Medicine/Hahnemann University Hospital in Philadelphia, Pennsylvania.

Zeineddine has just completed his Infectious Disease fellowship at Drexel University College of Medicine/ Hahnemann University Hospital, where he most recently served as chief fellow.

Rosenzweig is an infectious disease specialist at Abington Hospital, Jefferson Health in Philadelphia. She completed her fellowship at Temple University Hospital in Philadelphia. References:

MOST POPULAR ARTICLES
How Deadly Was the 2019-2020 Flu Season?
China Confirms Case of Bubonic Plague
Why Comparing Flu and COVID-19 Severity Is Not Equivalent
Study: Majority of Children with COVID-19 Have Mild Disease, Mortality is Rare
FEATURED