Enterovirus A71 and Acute Flaccid Myelitis&mdash;What's the Link?

Despite increased research and investigations, the cause of the spike in cases of AFM in the United States remains unknown.

A recent outbreak of acute flaccid myelitis among Colorado children may be due mainly to enterovirus A71, or the blame may lie elsewhere. Investigators have not pinpointed the exact culprit behind the spike in cases.

One strain of enterovirus that is known to be respon&shy;sible for many cases of hand, foot, and mouth disease is enterovirus A71, or EV-A71. Outbreaks of EV-A71 are fairly common worldwide, particularly in Asia. However, a recent spike in EV-A71—associated disease in Colorado has raised alarm in the medical community. The number of cases is greater than has previously been seen, and more patients have presented with serious issues such as central nervous system infections.

The outbreak was first noticed in May 2018, when pedi&shy;atric patients in Colorado were diagnosed with meningitis and encephalitis at higher than normal rates. The Colorado Department of Public Health and Environment reported that the rate of encephalitis caused by an unknown agent, such as a virus, was 2.75 times higher at that time than the 5-year average reported from 2013 to 2017. At the same time, rates of detection of enterovirus and rhinovirus in pediatric patients at Children’s Hospital Colorado in Aurora tripled. After testing specimens from infected children, scientists pinpointed EV-A71 as the culprit in 34 children with neurological illnesses.2

A team of investigators performed a detailed study of the first 13 children whose illnesses were traced to EV-A71 infec&shy;tion in order to get a fuller picture of the infections these children had. Twelve had meningitis, 9 had encephalitis, and 3 had acute flaccid myelitis. In its most devastating form, this normally rare infection can interfere with breathing and may be fatal.3 The disease may also cause inflammation of the spinal cord’s gray matter, as seen with MRI imaging, according to Samuel Dominguez, MD, PhD, an infectious disease specialist at Children’s Hospital Colorado and an author of the study. “Historically, the disease that we call acute flaccid myelitis now probably would have been polio,” he told Contagion®. 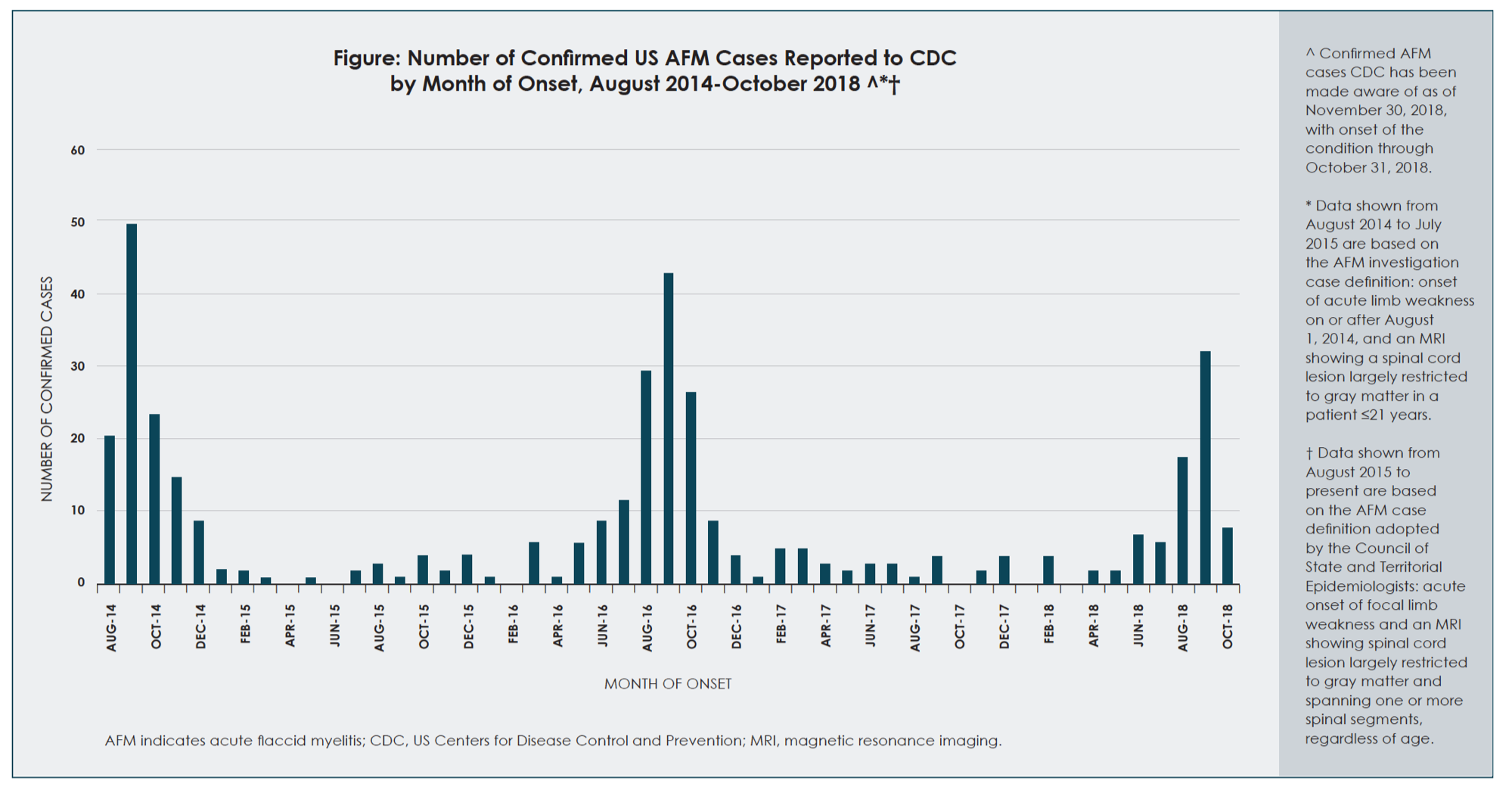 Why is the number of children diagnosed with EV-A71—associated illnesses increasing? The medical community is unsure.

“Acute flaccid paralysis, an umbrella term which includes acute flaccid myelitis, has been used by the World Health Organization [WHO] for years to do polio surveillance,” Vincent Racaniello, PhD, a professor in the Department of Microbiology and Immunology at Columbia University in New York, told Contagion®. “In 2014, there was a sudden increase in acute flaccid myelitis in the United States, possibly caused by EV-D68, [another nonpolio enterovirus]. At that point acute flaccid myelitis was defined, and I think surveillance has increased for this condition. One explanation [ for this recent outbreak] is that we are simply looking harder, but I find that not satisfactory, as we should have seen previous increases. It is difficult to argue that the infection is becoming more likely in children because of societal changes [such as] increasing population or [more children in] daycare, because these have been happening long before the current outbreaks.”

Some experts say the rise in cases is due simply to the increased prevalence of viruses. “It has to do with more of the [entero]virus being around,” Dr. Dominguez said. “It probably has to do with some genetic background.”

He emphasized that despite increasing numbers, serious complications remain exceptionally rare: “Like [we saw with] polio, only a small number got paralytic polio.” Just as most children who contracted the polio virus in years past had few, if any, symptoms, most children infected with EV-A71 will not go on to have acute flaccid myelitis. Of those who do, the severity varies. “The degree of paralysis is dependent somewhat on the virus and somewhat on the patient,” said Dr. Dominguez.

To be clear, acute flaccid myelitis is not caused solely by EV-A71. The aforementioned EV-D68 is another potential culprit. The 2014 Colorado outbreak may have been caused by EV-D68, and both EV-D68 and EV-A71 are behind some of this year’s cases. West Nile virus also can cause acute flaccid myelitis, although that tends to occur in adults. The CDC is not certain about exactly what is underlying this year’s outbreak.

“It may be one of the viruses that we’ve already detected,” Nancy Messonnier, MD, director of the CDC’s National Center for Immunization and Respiratory Diseases, said in a November 13 telebriefing with journalists. “It may be a virus that we haven’t yet detected. Or it could be that the virus is kicking off another process and it’s actually triggering, through an autoimmune process, acute flaccid myelitis.”

As far as outcomes for children with acute flaccid myelitis, they are a mixed bag. A study of 12 children in Colorado with acute flaccid myelitis diagnosed in 2014 revealed that of the 8 who finished the study, 6 still had problems with limb movement and functional skills a year later, with visible muscle atrophy in 5 subjects. Six of the 8 also had cranial nerve dysfunction, which can result in problems such as double vision and weakness of the facial muscles.6

“Severe neurological complications after EV-A71 infection are so rare that a vaccine is not warranted,” Dr. Racaniello explained. “Remember that poliovirus used to paralyze tens of thousands of children in the United States, which was the impetus for a polio vaccine. To have the China A71 vaccine licensed here would take several years.”

Nor are there any antivirals that work against the virus. Intravenous immunoglobulin can be administered, although it is not a proven therapy, according to Dr. Dominguez. What may work, he said, is giving affected patients physical therapy and speech therapy, which can lead to functional recoveries. “We would advocate for early and aggressive rehabilitation services,” he stressed.

Ms. Saloman is a health writer with more than 20 years of experience working for both consumer- and physician-focused publications. She is a graduate of Brandeis University and the Medill School of Journalism at Northwestern University. She lives in New Jersey with her family.