Are there advantageous effects to use of adjunctive IVIG in the treatment of STSS with clindamycin?

Streptococcal toxic shock syndrome (STSS) is a life-threatening disease caused by β-hemolytic streptococci, with group A Streptococcus being the most common pathogen.1 Mortality rates vary but are estimated to be between 30% and 60%.2-4 For STSS skin infections, the Infectious Diseases Society of America (IDSA) recommends combination therapy of penicillin and clindamycin5 along with surgical intervention.

Clindamycin is recommended because of its ability to suppress streptococcal toxin and cytokine production. Additionally, clindamycin has demonstrated efficacy in animal models6 and observational studies.7,8 Penicillin is also recommended because of potential resistance of group A Streptococcus to clindamycin. Although macrolide resistance is low in the United States, other countries have seen increased resistance rates to macrolides. Macrolides and clindamycin are not chemically related, but they share a similar mechanism of action, and many of these macrolide-resistant strains are also resistant to clindamycin.

Intravenous immunoglobulin (IVIG) has been suggested as adjunctive therapy to neutralize antibodies produced in response to streptococcal virulence factors9 and to inhibit the production of proinflammatory cytokines.10 However, controversy exists regarding the use of IVIG as adjunctive therapy, as IDSA guidelines do not recommend its routine use5 because of conflicting mortality benefit results and inconsistent use of clindamycin in the studies. Further, the lone prospective study of IVIG in STSS was terminated early because of slow enrollment.

A recent review and meta-analysis evaluated the mortality rate in studies evaluating adjunctive IVIG for patients treated with clindamycin for STSS.11 Previous studies had been complicated by the inherent risk of bias, the variable inclusion criteria, and the inconsistent use of clindamycin. Therefore, to combat bias, the authors used a Cochrane collaboration risk assessment tool.12 A meta-analysis was performed using a random-effects model and assessed heterogeneity using the Ι2 statistic, with the primary measure being the risk ratio (RR) for death at 30 days.

Five studies (1 randomized and 4 nonrandomized) met inclusion criteria from 1992 to 2009. One study was in children only, 1 study included children and adults, and the other 3 studies were in adults only. The primary outcome in each study was mortality at either 28 or 30 days. One hundred and sixty-five patients with STSS treated with clindamycin were included; among these, 70 patients also received IVIG. The overall mortality rate was 26.1%, ranging from 14.3% to 40.5% in individual studies. In the individual studies, IVIG administration was associated with lower mortality rates but was not statistically significant. However, in the pooled analysis, adjunctive IVIG administration in combination with clindamycin therapy was associated with a reduction in mortality from 33.7% to 15.7% (RR, 0.46; 95% CI, 0.26-0.83; P = .01), with negligible heterogeneity (I2 = 0%).

Although this was a meta-analysis, a limitation of the study still includes the small sample size, which may lack exact precision. Another limitation is that differences in baseline characteristics between groups may lead to confounding, with the authors acknowledging that the reduction in mortality rates associated with IVIG use could be due to confounding. A third limitation is that there was limited information on concomitant antibiotics, optimal dosing of IVIG, and length of therapy.

Without a large randomized, controlled trial, this study provides valuable insight and suggests advantageous effects of adjunctive IVIG in the treatment of STSS with clindamycin. Additionally, given that the condition is relatively rare and the previous valiant effort to enroll in a randomized, controlled trial proved futile, an international STSS registry, similar to the data collected by the ARDS Network, may help to provide more data and strengthen the recommendations (Table).

Zimmer is a clinical pharmacist/Antimicrobial Stewardship Coordinator at Northeast Regional Medical Center in Kirksville, Missouri. He is also an adjunct Professor in Pharmacology at ATSU-Kirksville College of Osteopathic Medicine. Drew enjoys fly-fishing, hunting, the St. Louis Cardinals and all things ID. You can find him on Twitter @zimrx17.* Zimmer is a member of the Society of Infectious Disease Pharmacists 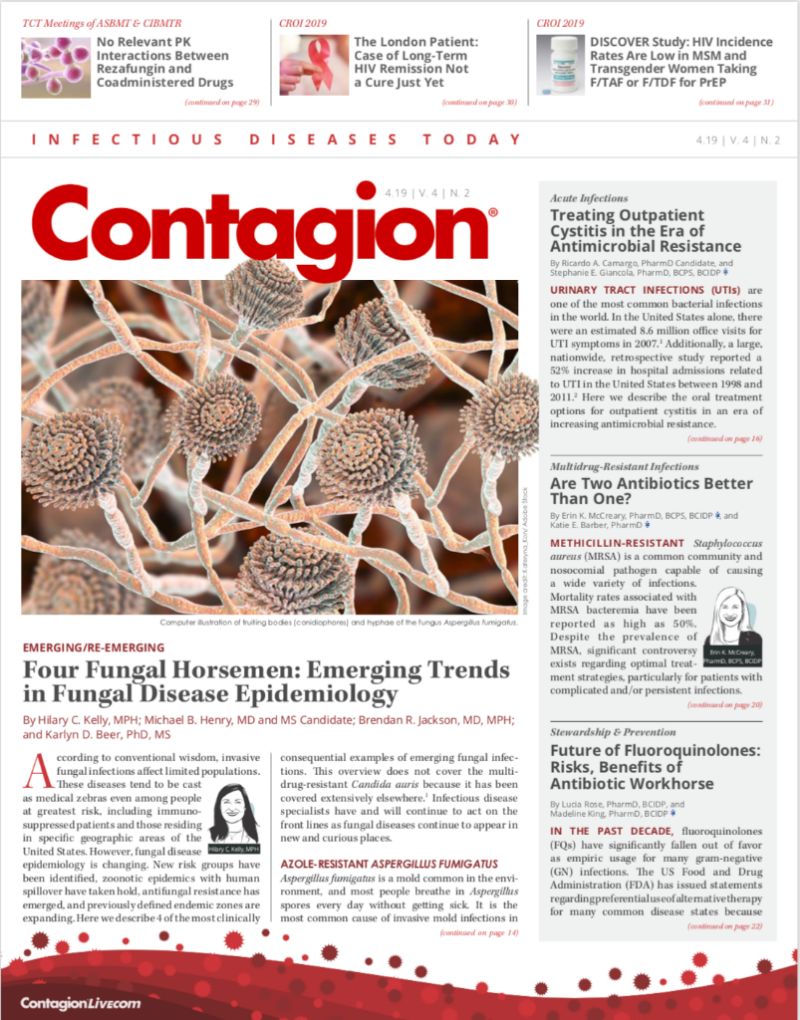 HIV Infection in 2019: A Cure Is Not the Real News
Intra-abdominal Infection With Eikenella corrodens in a Woman With Ovarian Cancer
Four Fungal Horsemen: Emerging Trends in Fungal Disease Epidemiology
Future of Fluoroquinolones: Risks, Benefits of Antibiotic Workhorse
Are Two Antibiotics Better Than One?
Treating Outpatient Cystitis in the Era of Antimicrobial Resistance
The Case for On-Demand PrEP
Biktarvy: A Regimen of Choice for HIV Therapy
Polyspecific Intravenous Immunoglobulin Plus Clindamycin for Streptococcal Toxic Shock Syndrome
PrEP Retention in Care&mdash;It Takes a Village
Related Videos
Related Content