DEC 07, 2018 | MICHAELA FLEMING
The Ebola outbreak running rampant in the North Kivu province of the Democratic Republic of the Congo (DRC) has entered its fourth month and is now the second-largest Ebola outbreak in recorded history.

Case counts have surpassed the 400 mark, with 423 confirmed cases. In just 24 hours on December 5, 2018, 13 new cases were confirmed, according to the DRC Ministry of Health.

As case counts continue to rise, international health partners are scrambling to stop the deadly outbreak before the disease becomes endemic to the area. But as Ebola transmission continues, the question has become: How much will it cost to resolve this outbreak?

In this particular outbreak, there has been a strong focus on the administration of the rVSV-ZEBOV Ebola vaccine. As of December 4, 2018, the vaccine has been administered to 40,493 individuals in the DRC since vaccination commenced in August.

The vaccines were donated by Merck as part of a 2016 negotiation with Gavi, the Vaccine Alliance, a Geneva-based organization that provided $5 million to Merck for vaccine development with the stipulation that Merck would provide 300,000 vaccines for emergency use during outbreaks.

The wide implementation of experimental vaccines, the record number of individuals treated with investigational therapy, and added response strategies being initiated by health workers all come with a substantial price tag.

On October 11, 2018, the African Region of the WHO indicated that funding is falling short to address the areas of the response that need attention. 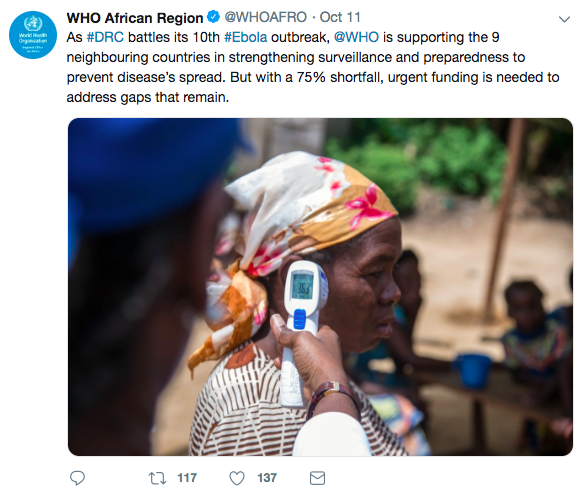 The DRC Ministry of Health, in collaboration with international partners, developed a response plan for the epidemic when it was initially declared in August. At that time, the projected cost to overcome the outbreak was $43.3 million. But, that was based on the expectation that the outbreak would be over by October, and as we are already 2 months past that date, on October 3, 2018, at the United Nations Security Council meeting on the Ebola Outbreak, Tedros Adhanom Ghebreyesus, MD, Director-General of the World Health Organization, requested that international partners contribute more funding to stop the spread of the outbreak and increase preparation in neighboring nations.

"We thank all our international partners who responded to our first call for funding,” Dr. Tedros said in his address. “It’s now important to mobilize further funding for regional preparedness, particularly in Uganda, but also in other neighboring countries. To date, we have pledges for US $8 million out of a request for US $33 million for this critical work.

On October 18, 2018, the DRC issued a revised plan for the response with a prediction that an additional $61 million would be needed for phase 2 of the response, which includes activities from November through January 2019, pushing the combined budgetary estimate to approximately $105 million.

This budget is likely to continue to balloon, as the most recent budget update accounted for the end of human-to-human transmission by the end of November.

In a recent situation report issued by the United Nations Children’s Fund (UNICEF), the organization indicated that only 40% of the funding that is necessary to carry out response activities tasked to the organization is currently available.

Approximately $21.8 million is expected from UNICEF in order to carry out the combined phase 1 and 2 efforts, but the current financial situation has left several key areas of the response underfunded.

The largest funding gap exists in the Water, Hygiene, and Sanitation sector, which focuses on providing clean drinking water and chlorinated water for hand washing, installing handwashing facilities, and instruction staff members of schools and Ebola treatment centers on hygiene promotion. Although critical for stopping the spread of Ebola, this area is currently experiencing a funding gap of 72% or $10.3 million.

Another area falling short of necessary funds is the child protection and psychosocial support sector, which focuses on providing support to children who may be unaccompanied or orphaned during an Ebola outbreak or who require support while receiving treatment for Ebola or while reintegrating to society following illness.

These activities are critical in this outbreak where there has been an influx of cases documented in young children. Despite the importance of these activities, the sector is currently experiencing a funding gap of 65% and requires an additional $648,000.

To puts these costs into perspective, the 2014 Ebola outbreak that killed 11,300 individuals cost approximately $14 billion to fight, and resulted in an economic and social burden of $53 billion.

Although the case counts in the current North Kivu outbreak are not nearly as high as 2014, it is clear that more funding is needed immediately in order to control this outbreak and implement measures to prevent future recurrences.

For the most recent case counts associated with the Tenth Ebola Outbreak in the DRC, check out the Contagion® Outbreak Monitor.
To stay informed on the latest in infectious disease news and developments, please sign up for our weekly newsletter.