Influx of Cyclospora Cases Could Be Linked with McDonald's Salads

JUL 13, 2018 | MICHAELA FLEMING
Cyclospora has been beating down on the United States this year, starting with a multistate outbreak of infections linked with Del Monte vegetable trays that sprung up in June, and relief from these infections is hardly in sight. Health officials in Iowa and Illinois first reported that since mid-May they have seen an increase in cases of cyclosporiasis which, following an initial investigation, that suggested the outbreak may be linked with salads from McDonald's restaurants. On July 13, 2018, a multi-state outbreak was reported in 7 states with a link to the salads.

US Food and Drug Administration (FDA) Commissioner Scott Gottlieb, MD, recently tweeted that the FDA is working alongside the US Centers for Disease Control and Prevention (CDC) and local health officials to determine the source of the infections. (See tweet.) 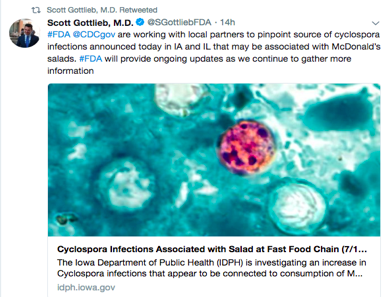 Source: https://twitter.com/SGottliebFDA/status/1017549199355924480
As of July 5, 2018, 5 confirmed cases of Cyclospora infection in Iowa have been declared as part of the multistate outbreak linked with Del Monte pre-packaged vegetable trays, according to the CDC. On July 12, Iowa health officials announced that they had identified 15 individuals with cyclosporiasis who stated they had eaten salads at McDonald's restaurants in late June to early July and subsequently fell ill.

“This summer there have been several clusters of Cyclospora illness associated with various foods that are commercially available. This week IDPH [Iowa Department of Public Health] has identified 15 Iowans who ate McDonald’s salads in late June to early July prior to getting ill,” said Patricia Quinlisk, MD, State Medical Director and Epidemiologist, Iowa Department of Public Health, in the statement.

In Illinois, the IDPH announced that they have had 90 reported cases of cyclosporiasis since mid-May. Approximately one-fourth of individuals who have been infected with Cyclospora reported eating a salad from McDonald's prior to getting sick.

“Although a link has been made to salads sold in McDonald’s restaurants in some Illinois cases, public health officials continue to investigate other sources,” said Illinois Department of Public Health Director Nirav D. Shah, MD, JD, in a statement.

McDonald's is in the process of removing the salads in the affected states that are linked with the contamination and replacing the products with salads from a different distributor. In addition, the company is reportedly removing the products from approximately 3000 locations across the Midwest.

As of August 9, 2018, the CDC reported 436 confirmed cases of cyclosporiasis related to this outbreak in 15 states. All illnesses started on or after May 20, with the median onset of June 29. The cases have been confirmed in individuals aged 14 to 91 with a median age of 53. The CDC reports that 66% of the affected are female. Additionally, there have been 20 hospitalizations and no deaths have been reported at this time. Illnesses that began after June 28, 2018, may not be reported or confirmed yet.

Individuals who have consumed McDonald’s salads and experience diarrhea and fatigue should contact their health care provider to be tested for Cyclospora in order to ensure proper diagnosis and treatment. Symptoms typically begin a week after exposure, but some individuals may be asymptomatic.

For the most recent case counts and states affected by the Cyclospora outbreak linked with McDonald's salads, be sure to check out the Contagion® Outbreak Monitor. Updated: August 9, 2018 at 5:10 PM EDT to reflect updated case counts.
To stay informed on the latest in infectious disease news and developments, please sign up for our weekly newsletter.