NOV 30, 2017 | KRISTI ROSA
New research published in the Journal of Adolescent Health has found that younger individuals of today are partaking in a broader range of sexual practices than their counterparts 20 years ago. Knowledge of current trends in sexual behavior can be used to better tailor sexual education policy to ensure that this population remains safe and healthy.

“By shedding light on when some young people are having sex and what kinds of sex they are having, our study highlights the need for accurate sex and relationships education that provides opportunities to discuss consent and safety in relation to a range of sexual practices,” lead author of the study Ruth Lewis, PhD, MRC/CSO Social and Public Health Sciences Unit at the University of Glasgow in Glasgow, Scotland, said in the official press release. “This will equip young people with the information and skills they need to maximize their wellbeing from their outset of their sexual lives.”

Previous research on the sexual practices of younger individuals revealed that condom use appears to be waning in this population, putting these individuals at increased risk for sexually transmitted diseases (STDs), such as syphilis, gonorrhea, or chlamydia. One “millennial sex survey,” conducted by condom manufacturer SKYN and published in Men’s Fitness found that less than 60% of individuals between 18 and 24 regularly used condoms during sexual encounters. Furthermore, a survey conducted at Duke University found that just 66% of sexually-active students were regular condom users. The Centers for Disease Control and Prevention (CDC) also reported that over 40% of sexually-active teenagers choose to forgo the condoms when having sex. 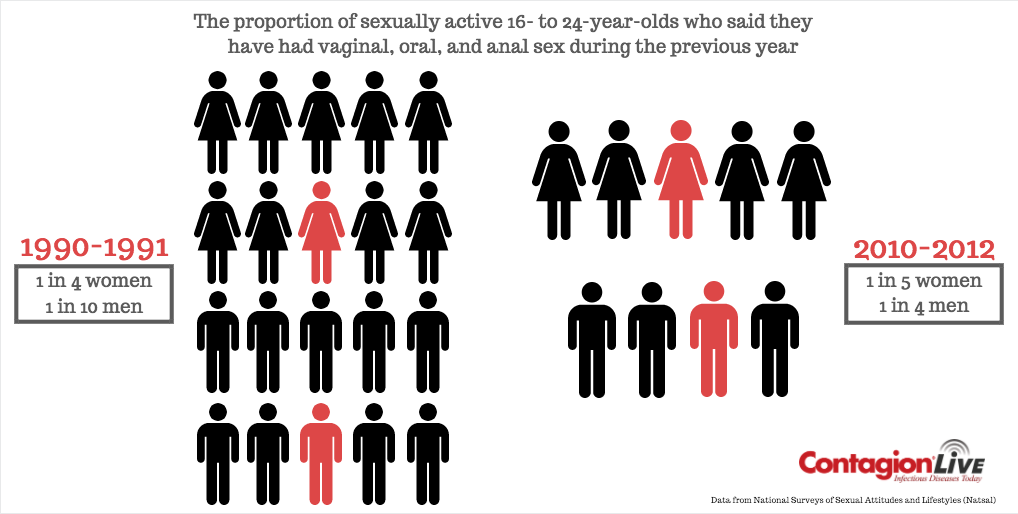 “The changes in practices we see here are consistent with the widening of other aspects of young people’s sexual experience, and are perhaps not surprising given the rapidly changing social context and the ever-increasing number of influences on sexual behavior,” senior author of the study Kaye Wellings, professor of Sexual and Reproductive Health at the London School of Hygiene & Tropical Medicine explained in the press release.

For these reasons, the findings of increased sexual activity may not be so surprising; the CDC reports that those between the ages of 15 and 24 account for at least half of the 20 million new STD infections that occur in the United States each year.

Despite the broader range of sexual practices, there is one aspect that has not changed much in 20 years. The researchers found that the median age at the first heterosexual experience among women and men born between 1990 and 1996 was 14 and the median age for those born between 2010 and 2012 was 16, which shows that the “median age at first heterosexual experience has not changed much in recent decades,” according to the press release. Perhaps this knowledge could inform stronger education policy, at least that seems to be the sentiment expressed by Dr. Lewis.

“At a time when much sex and relationships education is being updated, keeping pace with the current trends in sexual practices is crucial so that curricula are tailored to the realities of young people’s experiences,” Dr. Lewis said.
To stay informed on the latest in infectious disease news and developments, please sign up for our weekly newsletter.

HIV Transmissions in the UK Continue to Decline
Read more >>