AUG 06, 2018 | EKAMJEET RANDHAWA, MD, KEDESHA SIBLISS, MD, AND JOHN WOYTANOWSKI, MD
HISTORY OF THE PRESENT ILLNESS:  An 81-year-old female presented to the emergency department (ED) with altered mental status and was found to be unresponsive, with shaking of her extremities. At baseline, she was ambulatory and verbal, but dependent on family for all activities of daily living. Per her family, the patient was found in her bed, laying on her left side, unresponsive, with mild shaking of the extremities. Her eyes were open but without movement. The family denies any bowel or bladder incontinence. They also reported she had no sick contacts, recent illness, fever, chills, or cough. She had no recent surgeries or health care contacts. The patient was last seen normal 2 hours prior.

EPIDEMIOLOGICAL HISTORY:  Lives with 1 of her granddaughters, not sexually active, nonsmoker, nondrinker, and no illicit drug use. Pet-free home, no recent travel.

PHYSICAL EXAMINATION:  Vital signs: 97.4°F rectally, heart rate 110 bpm, respiratory rate 25, blood pressure 143/85 mm Hg, oxygen saturation 100% on 40% FiO2. The patient was unresponsive, noticed to have left-sided neck deviation, shaking movements of right hand and foot, and a left gaze deviation with nystagmus. She had clear lungs to auscultation and normal heart sounds; her abdomen was soft, nontender, and nondistended; and her extremities were warm without edema. There were no skin lesions, skin breakdown, or rashes. 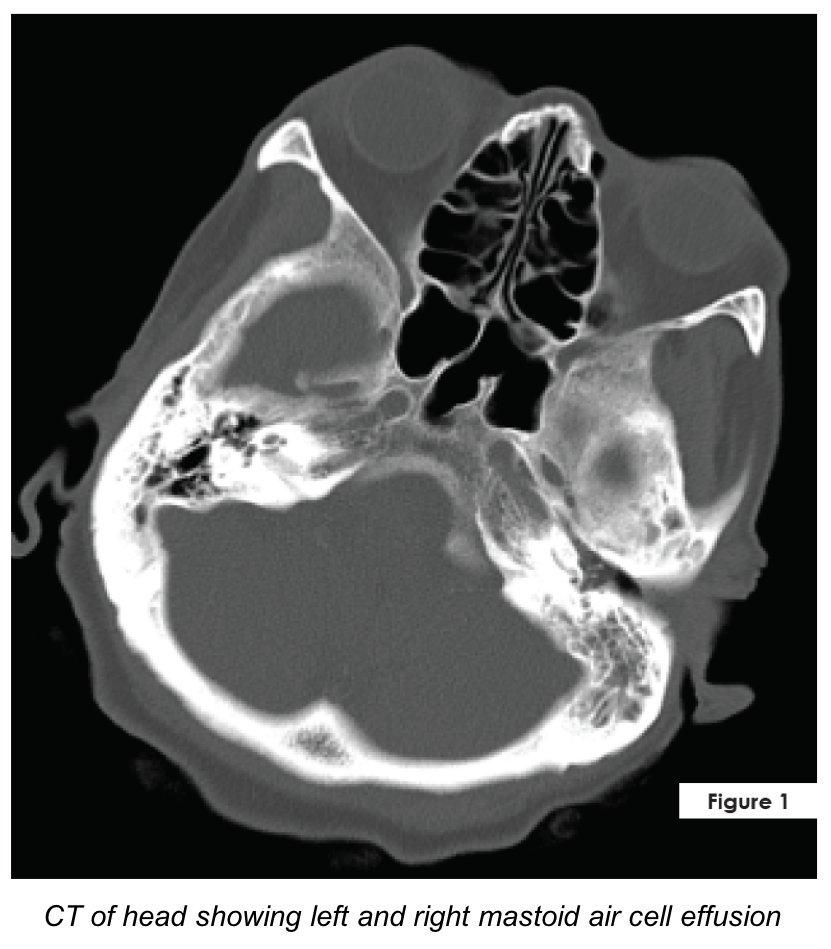 CLINICAL COURSE: The patient was intubated in the ED and started on sedation and anti-epileptic medication for presumed status epilepticus. She was admitted to the medical intensive care unit as she was requiring vasopressor therapy for septic shock. The patient was initially given dexamethasone and started on broad-spectrum antibiotic coverage with ampicillin, ceftriaxone, and vancomycin for presumed bacterial meningitis, given the CSF findings. Twelve hours after admission, blood and CSF cultures were positive for gram-positive cocci in chains (FIGURE 2). Once final culture results came back as Streptococcus pyogenes, antibiotics were narrowed to penicillin G (TABLE). 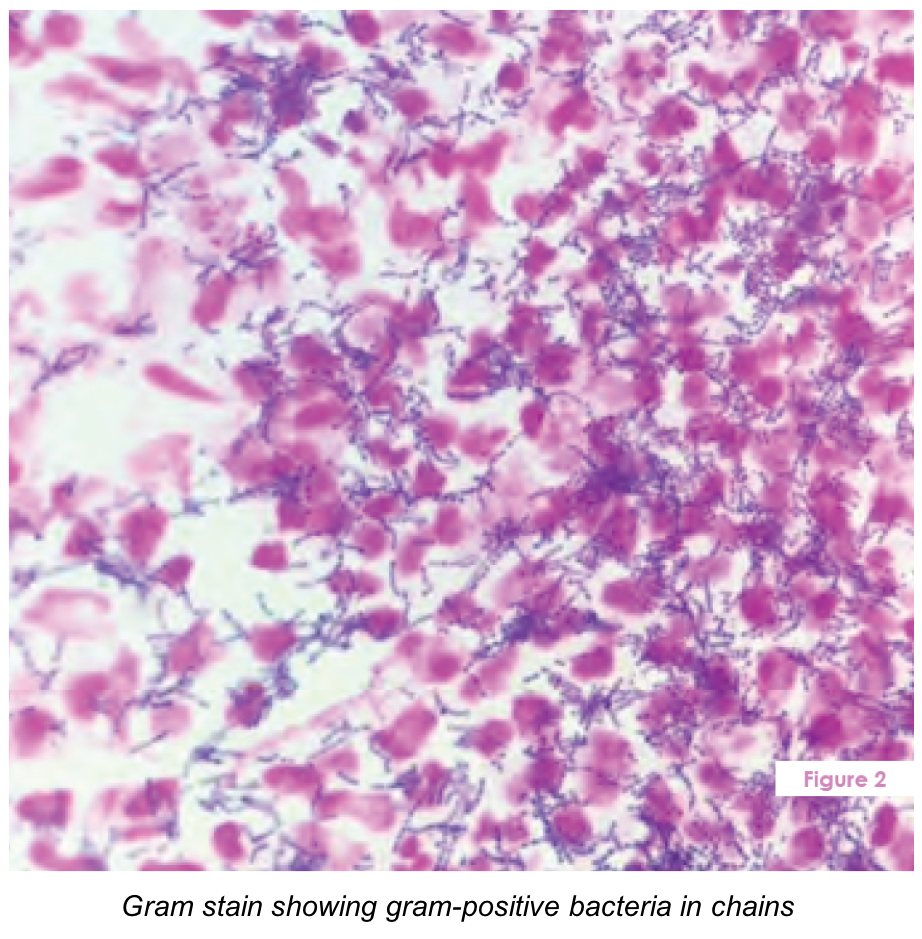 Other pertinent events during the hospitalization included the patient being in septic shock requiring vasopressor therapy, acute renal injury, hepatic dysfunction, and an iatrogenic pneumothorax from a central line placement. Given the mastoid effusion on the head CT, otitis was presumed to be the primary source of the invasive central nervous system (CNS) infection. An electroencephalogram was also performed, which revealed intermittent spike and wave discharges seen from the left temporal region. She also had frequent seizures arising from the left hemisphere occurring every 2 to 3 seconds, suggestive of focal electrographic status epilepticus. Unfortunately, the patient failed to recover from the infectious insult, her neurological status remained grave, and her family eventually changed her medical status to “Do not resuscitate.” The patient succumbed to multiorgan failure from septic shock. 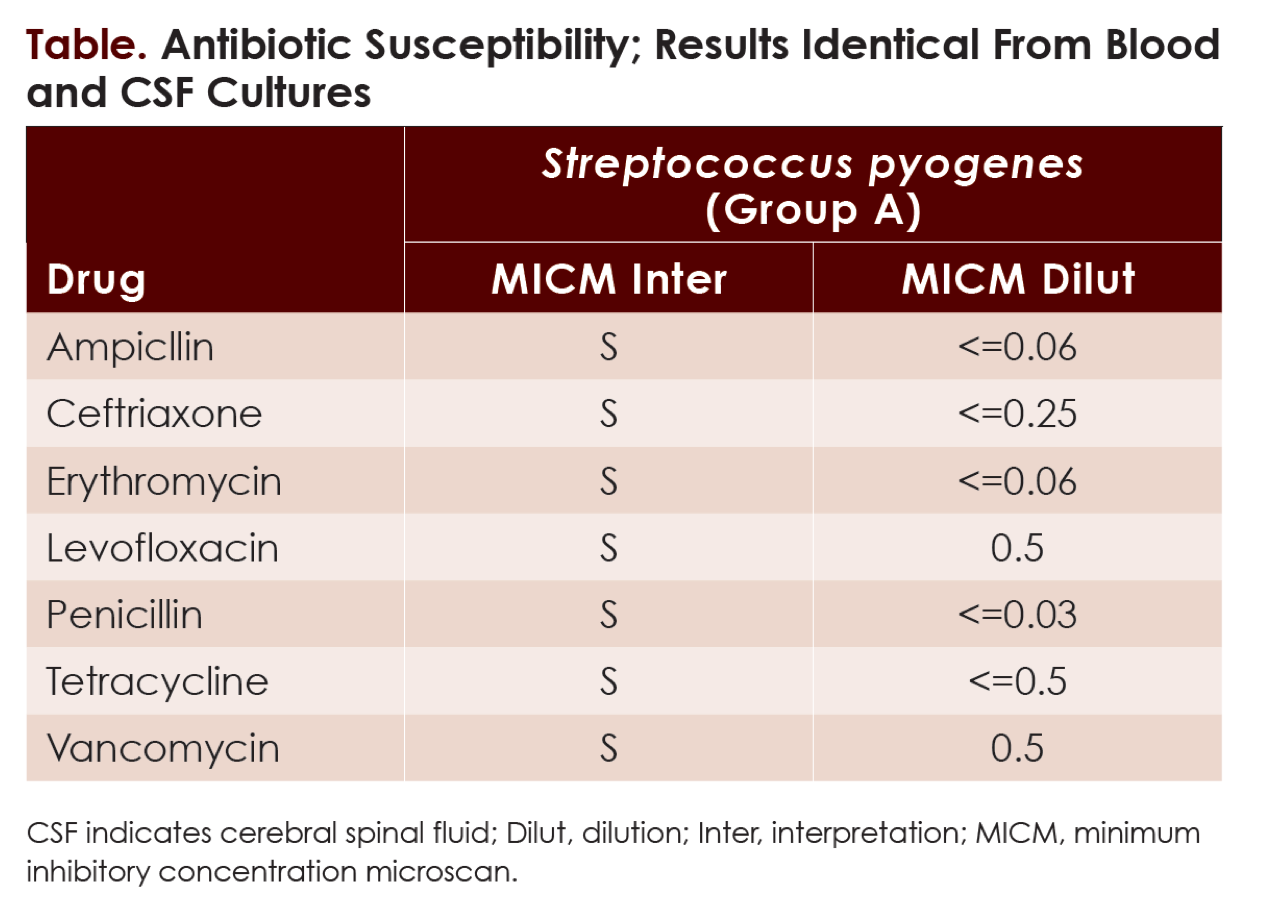 DISCUSSION: S pyogenes is a gram-positive beta-hemolytic bacterium, also known as group A streptococci (GAS), which causes a wide variety of diseases. The spectrum of potential infections—in addition to the most common, acute pharyngitis—caused by S pyogenes include integumentary infections, bacteremia, osteomyelitis, pneumonia, otitis media, sinusitis, and toxic shock syndrome. According to the US Centers for Disease Control and Prevention, in 2015, there were 15,540 cases of invasive GAS disease, with the most common etiology being cellulitis (39%), primary bacteremia (19.6%), pneumonia (14.1%), necrotizing fasciitis (7.5%), and Streptococcal toxic shock syndrome (2.7%).1 In addition, GAS can lead to nonsuppurative complications, such as rheumatic fever and glomerulonephritis.2 Rarely, meningitis and brain abscesses, as a direct extension of ear or sinus infections or hematogenous spread, can occur; CNS infections, such as meningitis, are rarely caused by GAS.3

Invasion of the CNS by microorganisms is a severe and often morbid event. A total of 1.2 million cases of bacterial meningitis occur annually worldwide.4 The major causes of community-acquired bacterial meningitis are Streptococcus pneumoniae, Neisseria meningitidis, and Listeria monocytogenes, with health care–associated meningitis being largely caused by Staphylococci and aerobic gram-negative bacilli.4 S pyogenes is a rare cause of meningitis. GAS meningitis has a prevalence of 0.06 cases in 100,000 children per year, with a case mortality rate of 43%5; GAS CNS infections remain rare and account for less than 0.2% of all bacterial meningitis.3,6

GAS meningitis is a community-acquired disease. In 2002, van de Beek published that of 41 patients with GAS meningitis, 60% had prior otitis or sinusitis; the fulminate disease had a mortality rate of 27%.7 Another case series by Sommer revealed that of 9 cases, 8 were community acquired, 6 had prior neurosurgical conditions, and 5 had upper respiratory tract infections.6 Epidemiological data from our hospital showed that from 2013 to 2017, there were 41 cultures positive for GAS, of which 40 were blood cultures and 1 was the case described above with a CSF culture. Resistance patterns showed that 1 culture was resistant to clindamycin, erythromycin, and tetracyclines; 4 cultures were resistant to erythromycin and tetracyclines; and 3 cultures were resistant to tetracyclines. From 2013 to 2017, there was no resistance to penicillins by GAS at our inner-city hospital (unpublished raw data).

In conclusion, GAS, or S pyogenes, is a rare cause of bacterial meningitis after the neonatal period but must be considered as a potential pathogen. Early recognition and treatment are critical, as diagnostic failure can result in sepsis and death.

Dr. Woytanowski is an internal medicine resident at Drexel University College of Medicine with a goal of pursuing a fellowship in pulmonology and critical care.
References: